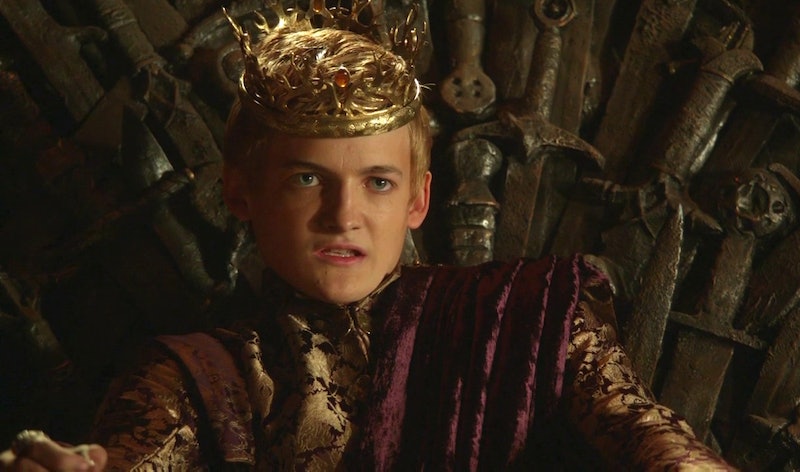 During a recent appearance at New York Comic Con, King Joffrey — aka, Jack Gleeson — had a lot to say about Game of Thrones. Even though he's no longer on the series, he's still a major figure in the franchise — perhaps not when it comes to Season 7 spoilers, but instead when it comes to hilarious tidbits about the series. Case in point: During the Game of Thrones panel at NYCC, Gleeson told a room of fans and reporters (including Bustle's very own) all about his audition for the role of King Joffrey way back in the day.

When Gleeson was asked what scene he was asked to audition with, he responded with the following:

"It was the scene, I think it's in the very first episode, where the whole Lannister gang goes to Winterfell and Joffrey's squaring up against Robb Stark. They're talking about archery or something like that, and Joffrey's trying to assert himself. I just remember Dan and Dave actually LOL-ing during my audition. I was like, Maybe they're laughing at how bad the performance is. But I think they were laughing at how mean and cruel my portrayal was. Almost camp."

This, to me, captures perfectly why Gleeson made Joffrey such a uniquely terrifying baddie.

Obviously, the reason Joffrey is so terrifying is that he's both ridiculous and completely sociopathic. As such, the character forces you as a viewer to constantly vacillate between laughter and horror. This is uncomfortable. If Gleeson was just permanently scary as Joffrey, his performance would only have one note, and you'd get used to it. The fact that there was always a bit of a hilarious quality to Joffrey's sadism made him interesting.

We see this, for example, when Joffrey torments the butcher's boy he finds Arya fencing with. The scene starts off risible — why would someone with years of training in fencing deign to challenge a butcher's boy with a wooden stick? Even if Joffrey were to come out on top, he wouldn't profit from the fight. It gets all the sillier when Arya, who is much smaller than Joffrey, manages to thwack him over the head with such force that he's dazed. After Joffrey's mauling, he's left whimpering on the floor and viewers want to laugh. But, later we see the dark side of Joffrey: his reaction is in complete excess of the situation. He ends up ordering both the butcher boy and direwolf's executions — the direwolf's officially, the butcher boy's via his bodyguard, The Hound.

So, next time you're doing a Game Of Thrones rewatch to stroll down the bloody memory lane that resides in Westeros, make sure you keep a note just how Gleeson created one of the most memorable television baddies of all time.