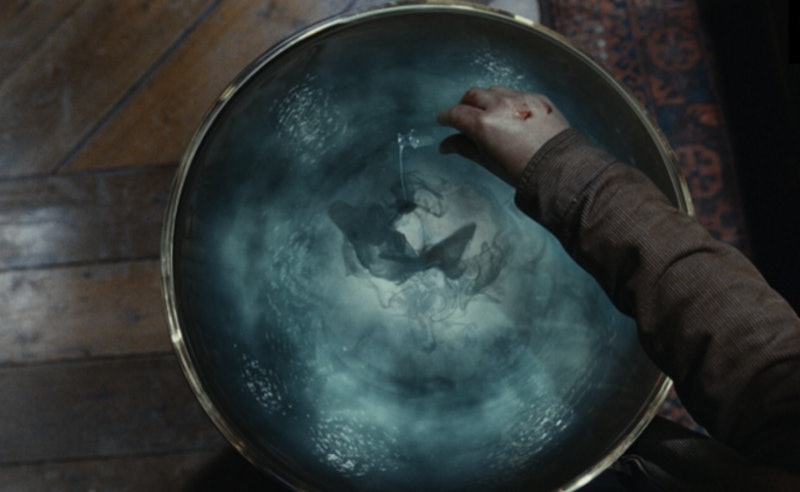 Hey there, anyone feel like suffering a death by suffocation after open-mouth sobbing from sheer cuteness for an hour? IF SO, this oughta do the trick! Some guy on the internet who clearly wants to wreak havoc on the spectrum of human emotion made his wife a real Pensieve from Harry Potter , and the concept is just cute enough to kill you dead.

If you're only a casual Potterhead and forgot what a Pensieve was, it's this handy basin, made of stone or metal, where wizards and witches can store their memories. They can pull the silvery strands of a memory and put them in the basin for safekeeping, where they can revisit them or allow other people to experience them. You might remember a certain lightning-scarred boy with little to no regard for basic human privacy buttinsky-ing into Albus Dumbledore's, but I digress.

The book only lightly brushed on the idea of a Pensieve being used for romantic reasons, in that Snape used it to harbor his memories of Lily — but by the end of the book, those were necessary for context, not exactly reminiscing on the good ole pre-Death Eater days. But Reddit user DuffManSzALotAThings somehow managed to make a Pensieve more swoon-worthy than The Notebook.

It started out with Hedwig hand-delivering the gift, as one does when you are clearly in the most perfect geeky marriage ever.

To make this LEGIT magical, he also crafted his wife her very own wand, which had a magnet at the top.

Oh, and listen up, Potter amateurs — this man made the bowl that is the Pensieve. At a pottery class. ARE YOU TAKING NOTES, LITERALLY EVERYONE IN THE WORLD WHO ISN'T HIM?

And then, just in case you weren't already drowning in your sea of emotions, he filled the Pensieve full of memories that they shared together.

(Please #respect that the Beanie Baby tag is still in tact. '90s kids can breathe a sigh of relief.)

Anyway, here's where the REAL magic came in — the memories were magnetized to latch onto the wand JUST LIKE A REAL PENSIEVE, YOU GUYS.

And when she opened one to reveal the memory inside, it was unspeakably precious.

OH and here's the last sucker punch in the feels — he set up a station for ~future memories~ as well.

Seeing as they are hands down the most precious couple on the planet, there are bound to be more to come.

If anybody needs me, I'm looking for a towel to dry off my river of tears. Proving yet again that Potterheads are far and away the most romantic (and clever!) fandom of them all.

More like this
16 Novels That Paint A Realistic Portrait Of Abortion
By K.W. Colyard
Neil Patrick Harris Will Play 'Doctor Who's “Greatest Enemy” Yet
By El Hunt
Annie Lord’s Memoir Will Make You Believe In Love Again
By Shahed Ezaydi
Ottessa Moshfegh Is Happy To Be Your “It” Girl
By Arya Roshanian
Get Even More From Bustle — Sign Up For The Newsletter