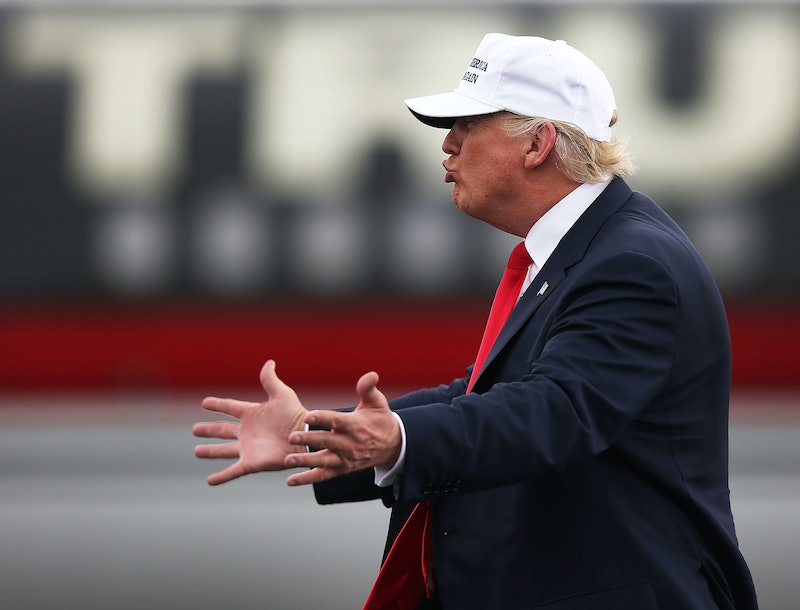 As fallout continues after the release of the Access Hollywood tape which shows Republican presidential nominee Donald Trump talking about kissing women without their permission and grabbing them "by the pussy," two women spoke to The New York Times and accused Trump of touching them without their consent. Trump told The Times reporter, "None of this ever took place," and his campaign released a statement that read, "This entire article is fiction, and for The New York Times to launch a completely false, coordinated character assassination against Mr. Trump on a topic like this is dangerous."

In the report published on Wednesday, Jessica Leeds and Rachel Crooks claim that Trump touched them in ways they did not consent to. Leeds claimed she was groped by Trump on a plane decades ago while sitting next to him in a first-class cabin. Crooks says that Trump kissed her on the cheek and then on the mouth when she introduced herself to him at Trump Tower because her company did business with him.

They told The Times that they had decided to speak out about their experiences because they were infuriated by Trump's quote at the second presidential debate that what he is heard saying on the Access Hollywood tape was "just words" which never turned into actions. Trump denied the women's claims, as well as any allegations that he ever put those words into action, reportedly telling The Times reporter, "I don’t do it. I don’t do it. It was locker room talk."

A statement from Jason Miller, Trump's senior communications advisor, not only called the Times article "fiction," but also called it a "new low." The statement reads:

This entire article is fiction, and for the New York Times to launch a completely false, coordinated character assassination against Mr. Trump on a topic like this is dangerous. To reach back decades in an attempt to smear Mr. Trump trivializes sexual assault, and it sets a new low for where the media is willing to go in its efforts to determine this election.

It is absurd to think that one of the most recognizable business leaders on the planet with a strong record of empowering women in his companies would do the things alleged in this story, and for this to only become public decades later in the final month of a campaign for president should say it all.

Further, the Times story buries the pro-Clinton financial and social media activity on behalf of Hillary Clinton’s candidacy, reinforcing that this truly is nothing more than a political attack. This is a sad day for the Times.

Other women have also come forward with claims which ring similar to the words Trump was recorded saying while talking with Billy Bush. The same Times reporters who published these newest allegations also earlier this year published an extensive look at women who have made claims against Trump, whether over unwanted advances or crude and misogynistic comments. Those women included Rowanne Brewer Lane, Barbara A. Res, Jill Harth, and Temple Taggart, the latter of whose story reportedly was the catalyst for Crooks to come forward with her own. Trump denied all of those women's allegations as well, denying any wrongdoing and saying he would "never" do things like what he was accused of.

The leaking of the Access Hollywood tape marked the first time Trump had ever apologized in his campaign, despite having called Mexicans rapists, called for a ban on Muslims, said black people are living in hell and have nothing else to lose, said Megyn Kelly had "blood coming out of her wherever," among a trove of other offensive statements. As Trump has said, so far, it has all been words. Gaining access to the Oval Office, however, would give him the ability to put these words into action.

However, he vehemently denies the allegations these two women and other women have put forward against him, reportedly calling the reporter who contacted him for comment a "disgusting human being" for asking.