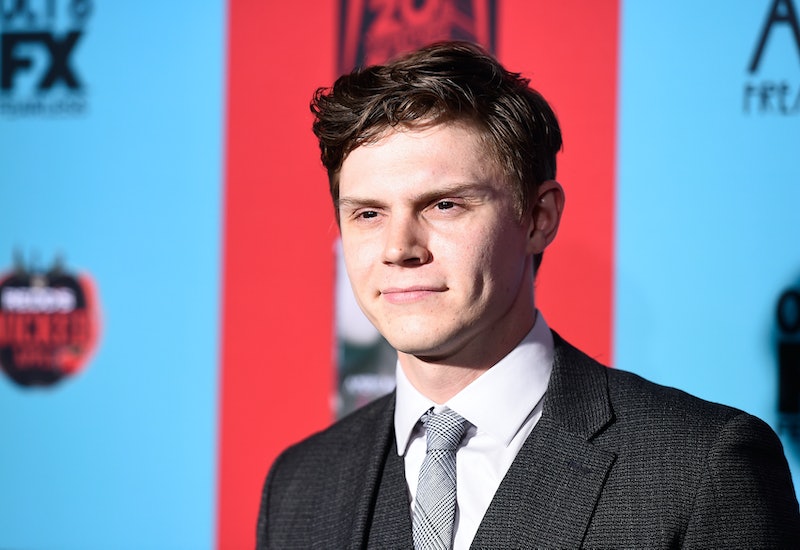 Fans have waited weeks and weeks to find out who Evan Peters' American Horror Story: Roanoke character is and now Ryan Murphy has finally given us an answer. During Wednesday night's episode, it was revealed that Evan Peters is actually Edward Phillipe Mott and from everything we've seen so far, it may very well be his most fascinating AHS role to date. Earlier today, Murphy took to Twitter to tease that Peters' character would finally appear this week and that it wouldn't be in the form of the man behind the true-crime camera like many people suspected. But really, that would've probably been a waste of Peters' talents. He does his best work in the spotlight, which makes this role pretty perfect for him.

We knew the Mott family background would be explored this season and I have to say that Peters' portrayal of Dandy Mott's ancestor was so spot on. I could totally believe that these two characters were related. But that wasn't the only interesting thing by far to come out of Edward Mott's story. We learned that he was secretly in love with his male servant and had a deep appreciation for paintings. So when he decided to buy the farmhouse in Roanoke and wake up to the sight of all his works of art torn to shreds (courtesy of The Butcher), you can imagine how upset he was.

Yet much like Matt and Shelby, he refused to leave the house and chocked it up to the work of one of his workers. But then the blood moon came and he found himself roasted on a pike faster than you could say "not the wig!!!". And according to the true-crime historian, that was the last that was ever seen of Mott. But the house continued to get passed down throughout the generations of his family all the way up to the end of the Mott line when his last living relative died in South Florida in 1952. (Dandy reference anyone?)

Let's just hope that's not the only flashback we get of Peters' character. Because if that's all we ever see of him I'm going to be severely disappointed to the point where The Butcher's wrath will look like child's play.

More like this
Who Is Liam Neeson's Character In The Obi-Wan Kenobi Finale?
By Kadin Burnett
Viktor Hargreeves’ Coming Out Scenes Are The Sweetest Part Of Umbrella Academy Season 3
By Gretchen Smail
17 BTS 'Love Island' Secrets Only Real Fans Will Know About
By Bustle UK
Everything You Need To Remember Before Westworld Season 4
By Brad Witter
Get Even More From Bustle — Sign Up For The Newsletter