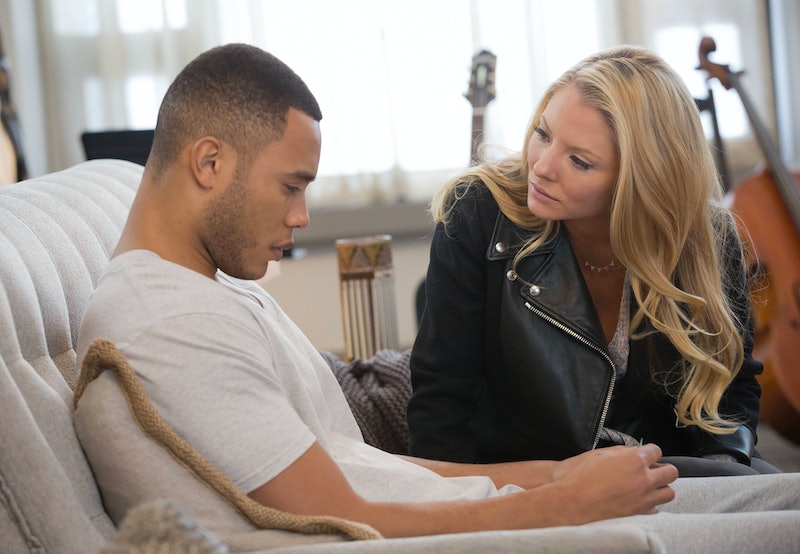 As soon as Rhonda died, I knew that Andre was going to have a time of it on Empire Season 3. Rhonda was the one who held his whole life together, and, without her, Andre is going through some interesting changes. The first is working alongside Lucious to beat up people (which is so not Andre’s M.O.), but the second is seeing Rhonda as a ghost everywhere. She talks to him a lot, Ghost Rhonda, and Ghost Rhonda even joined in on Andre’s hookup. That’s right — Nessa and Andre hooked up on Empire ... and Rhonda joined in.

From the moment that Andre saw Nessa in that scary, rundown studio, there was chemistry. It’s great! He needs it! She’s cute! He’s cute! Let’s do this! Obviously, Andre is still getting over the death of his wife, but, after Andre bullied Shine into signing a record deal for Nessa, I guess it was all on. Nessa came over to Andre’s, she and Andre started smooching, and when Andre said that he just couldn’t do it, boom: Rhonda appeared and cheered him on to have sex with Nessa. She even joined in.

Empire frequently moves outside the realm of possibility, but this was just otherworldly (literally and figuratively). This was my face while watching:

Let’s not pretend that ghost sex hasn’t been done before — Izzie and Ghost Denny were boning on Grey’s Anatomy for way too long, and I still haven’t forgiven Shonda Rhimes for that storyline. But, in this case, I think that, if Rhonda is encouraging Andre in his own mind to do things that will ultimately make him happy, I can live with that. It may be very strange to watch (there was chin licking here, and I just can’t), but I’m wholeheartedly Team Andre on Empire. I guess it’s the more, the merrier, if you’re a ghost or not, right?