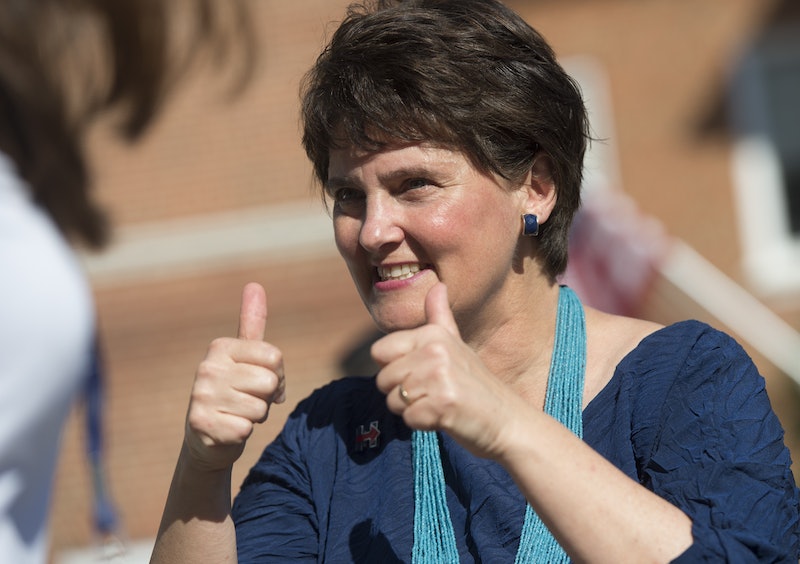 If Democratic presidential nominee Hillary Clinton wins the White House, there's a possibility that Tim Kaine's wife, Anne Holton could join the Clinton administration. Holton, a former Virginia secretary of education, would like to be an advocate for education, she told NH1 news.

Holton's personal resume is impressive: she is a Princeton and Harvard graduate who met her husband while attending Harvard Law School., and has also served as an attorney, judge, Virginia's First Lady, and the commonwealth's secretary of education. And as the daughter of former Republican Governor Linwood Holton Jr., who was in office during the early 1970s, Holton has been involved in politics her entire life. She campaigned for her husband during his successful runs for city council, mayor, governor, and senator, and she is currently an important surrogate for the Clinton-Kaine ticket.

As part of a Clinton administration, Holton would be indispensable in an advocacy role. After all, she has been doing it for years. She became aware of the need for education reform when she was a child and her father sent her and her sister to a historically all-black public school to show his commitment to desegregation. She went on to represent low-income clients as a legal aid attorney, and later served as a Richmond city judge in a juvenile and domestic relations court. As Virginia's First Lady, she worked to help children and teenagers in foster care find stable homes, a cause she continued to champion after Kaine left office.

Holton has frequently voiced how important she finds education to be. "I have spent much of my working life focused on children and families at the margin, with full appreciation of the crucial role education can and must play in helping young people escape poverty and become successful adults," she wrote in a Washington Post op-ed in June 2015.

Current Vice President Joe Biden's wife, Dr. Jill Biden, has also played an active role in education during Obama's time in office. Jill teaches English full-time at a Virginia community college while highlighting the importance of community colleges. As Second Lady, Holton would have an elevated platform with which to increase awareness and support for the cause of education reform.

Still, there is a government position Holton would not take. If Clinton wins the presidency, her husband's senate seat would become vacant. But according to Holton, it's not an option.

"I'll tell you a secret: The vice president is the president of the Senate. I will never let my husband be my boss," Holton told NH1 News. But if Clinton is indeed elected president, expect to see more of Holton regardless.