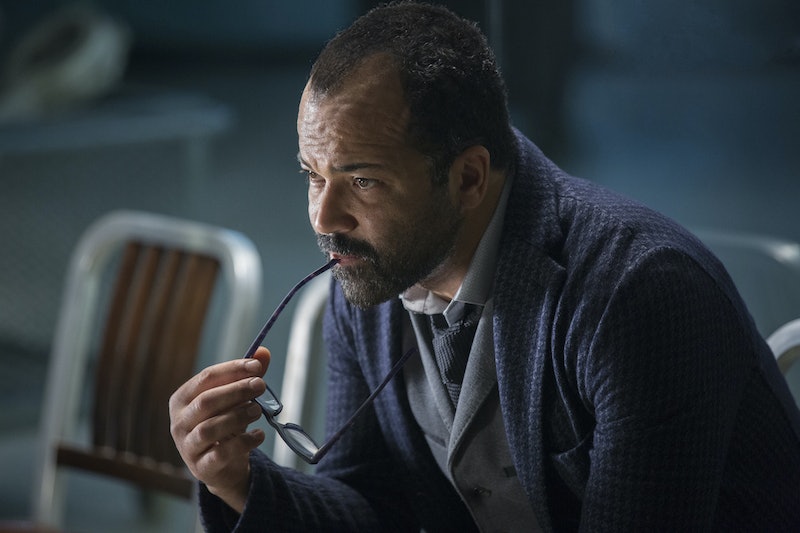 If you haven't been watching HBO’s new show Westworld, you should start immediately, because things are getting crazy and the more people I can theorize with, the better. We're only two episodes in and already some of the titular theme park's robotic hosts are starting to develop memories from their previous storylines that could lead to huge problems. But that's not even the only issue facing the park. As we saw in the second episode of Westworld, Bernard is having secret talks with Dolores, which are clearly having an effect on her. Bernard doesn't seem like a villain, but depending on what exactly he has been saying to her during these meetings, these conversations could prove to be extremely dangerous.

In the second Westworld episode, which aired on Oct. 9, he wakes Dolores up and asks if she remembers what they talked about and if she told anyone. She says no and that she has kept their secret. Bernard then tells her that there’s something different about the way she speaks and he finds it fascinating, but others may not see it that way. She then erases the interaction between the two, but not the memory of what was said. The talks are clearly having an affect on her humanity, which we see when she kills the fly, and also on her memory. In the second episode, she hears someone utter the word “remember,” and she seems to recall a day in the past, even though the hosts' memories are meant to be wiped every night.

The purpose of their meetings are unclear, but here are a few theories about why Bernard is secretly pulling Dolores from Westworld for these late-night talks.

He Is Studying Her

It often seems like Bernard is honestly interested in testing the extent of the hosts' humanity and whether or not they can develop self-awareness. It wouldn’t be very surprising if he picked Dolores to use as a test subject for this, since she’s the oldest host and therefore has the most memories to potentially access.

"These Violent Delights Have Violent Ends"

This phrase seemed to be a trigger for Maeve to remember her past and even will herself out of sleep mode outside the park. Though Abernathy originally whispered it to Dolores due to his own past narrative as a professor, Bernard may be repeating it back to her to trigger more memories.

Bernard suggested that someone might be sabotaging the hosts, but that could've been a red herring to distract from the fact that he's the one doing the sabotaging. The fact that he's having outside interactions with a host who is progressively changing her behavior and keeping it a secret certainly suggests an ulterior motive. If he was simply doing research on Dolores, why must he insist that she keep it a secret?

That sabotage could lead to a full-scale revolution. Whether that is Bernard's goal or not, by testing Dolores' memory and steering her towards self-awareness, he's dangerously close to turning against the guests who have wronged her and potentially, all humans.

He's In Love With Dolores

There seems to be an emotional attachment between the two and it's possible that Bernard is using these talks in the hopes of finding out whether Dolores is capable of returning those feelings — without being programmed to do so.

Or He Just Likes Talking To Her

Bernard seems to be dealing with a lot, emotionally, and he may just need someone to talk to who he knows will listen. Perhaps his motives aren't sinister at all, and he's just been working on Dolores for so long, she's the host he feels most comfortable around.

I hope Bernard is talking to Dolores for an innocent reason, but Westworld has made a point to show viewers what people can be capable of, and that includes the people working behind the scenes.