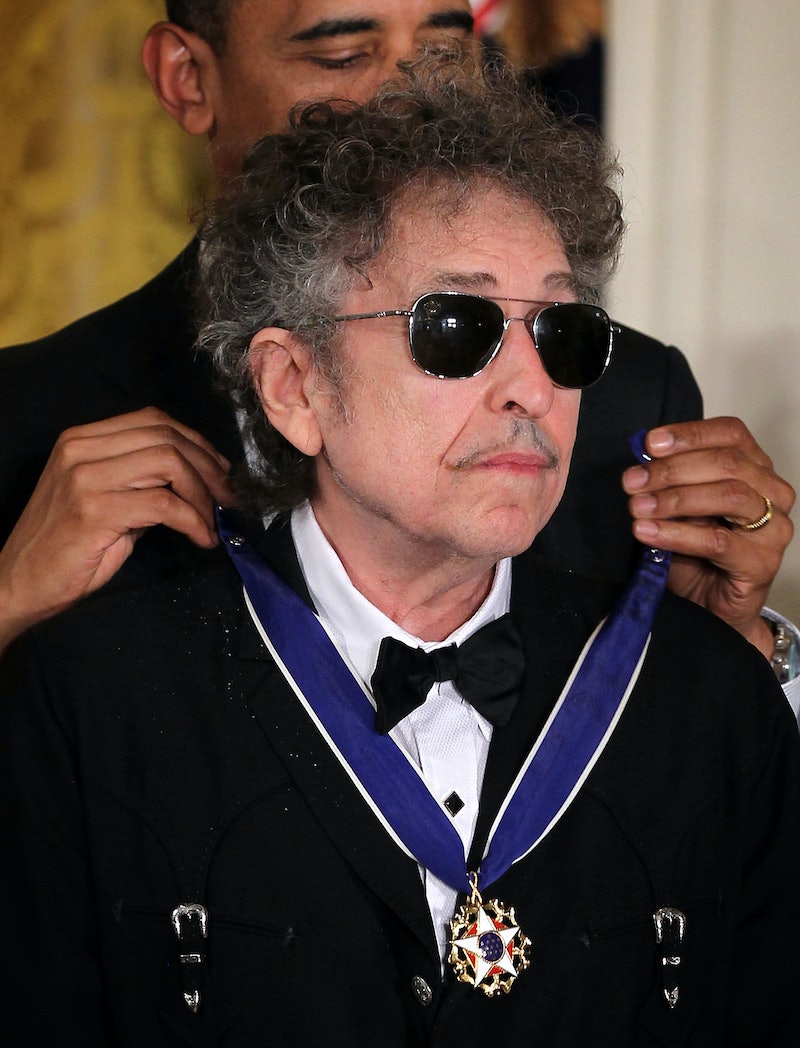 Depending on your feelings regarding songwriting and ~the status quo~, the news that Bob Dylan has won the 2016 Nobel Prize in Literature is either a sweet salve on the festering wound of our culture, or is just, like, in line with 2016, The Year That Jumped The Tracks. Regardless, Bob Dylan's Nobel Prize has already led to some amazing internet reactions and I've been giggling all morning, which is not a reaction one would expect at a time like this, but here we are.

Since 1901, the Nobel Prize in Literature has been awarded to the person who has produced, "in the field of literature, the most outstanding work in an ideal direction." Past winners have included playwrights, poets, novelists, biographers, short story writers, orators (hai, Sir Winston Churchill) - but never a songwriter. That fact alone makes Dylan's win momentous; that acclaimed Japanese writer Haruki Murakami was considered by pretty much everyone to be a shoo-in makes it bizarrely so.

In their announcement, the Swedish Academy praised Dylan for "having created new poetic expressions within the great American song tradition." Sara Danius, the Swedish Academy's permanent secretary, compared Dylan's work to the tradition of ancient Greek poets, noting, "If you look back, far back, 2,500 years or so, you discover Homer and Sappho and they wrote poetic texts that were meant to be listened to, that were meant to be performed, often with instruments -- and it's the same way with Bob Dylan." He is the first American to win the Nobel Prize in Literature since Toni Morrison. He will go down in the annals of history. He has won roughly $900,000. Does any of this preclude Bob Dylan from being mercilessly goofed on by Twitter? LOL no, nothing is sacred on the internet, duh.

1. I mean, honestly, this year is proving dangerous for "artists our dads love"

5. But since he's not dead, we can go back to mocking his whole... thing

6. And feeling bad for Haruki Murakami