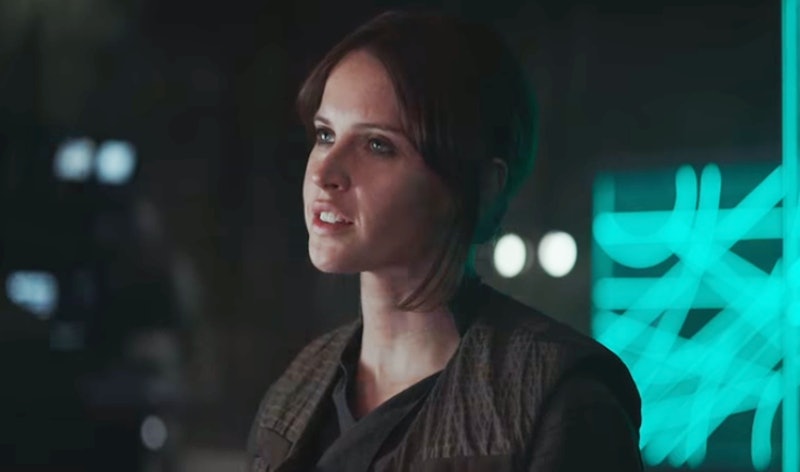 With two months left until its release, the second trailer for Rogue One: A Star Wars Story was released on Thursday morning, and there's so much excitement buzzing about it that you can probably hear the united, hysterical thrum of delighted Star Wars fans across America right now. There's a lot to unpack in the new Rogue One trailer, so much, in fact, that it's definitely going to take just a few more viewings to fully digest and fully speculate over what everything could possibly mean. But, for now, there's a specific aspect I'm totally obsessing over, and that's the connection between Jyn Erso and Princess Leia in the trailer. It's something that you may have missed.

Throughout the trailer, you may have noticed the recurring suggestion of "hope" as a central theme for Rogue One. Though hope is obviously a crucial plot point in keeping the Rebellion determined to fight throughout the film, it also seems like a clear possible reference to the first installment of the original Star Wars trilogy — A New Hope — which Rogue One is a prequel to. It's possible that there could be many similarities between Rogue One and A New Hope, but there's one particular scene at the start of the new trailer that is drawing instant parallels between the two films, and between the characters of Jyn and Leia, as a result.

In A New Hope, Princess Leia is being held prisoner in a detention center on the Death Star. Thankfully, Chewbacca, Han Solo, and Luke Skywalker manage break into the place and rescue her from imprisonment. In the trailer for Rogue One, it looks as though Jyn Erso is also sprung from imprisonment by rebel Captain Cassian Andor. And though "Do you want to get out of here?" is hardly as iconic as "I'm Luke Skywalker, I'm here to rescue you," it still totally works as a playful throwback.

It might only be the briefest of parallels, but it's definitely interesting and also feels seemingly deliberate. Whether it's simply a wink wink, nudge nudge reference for fans, or if it has deeper meaning will remain to be seen, but there is one final suggestion in the trailer that could point to it being the latter.

Right before we witness Jyn being rescued from imprisonment, the trailer shows her father, Galen, being seized by the Empire when she's a young girl. Not much later in the trailer, we then see Galen again, dressed in Empire regalia, looking unnervingly comfortable in his surroundings. Could it be that Jyn's father is no longer an unwilling prisoner in the Empire and that he's maybe working for the Dark Side?

If so, then it would be a palpable parallel relationship to that between Leia and Darth Vader (who are father and daughter, albeit in a deeply dysfunctional way, to say the least). The trailer for Rogue One definitely seems to provide a sense that Jyn will have to face some form of moral struggle during the film.

For Jyn to make it her mission to save her father from the Empire, only to discover that he's become a part of them (and ultimately, her enemy), would certainly fit the bill on that note. And it would definitely hark back to the moral struggle which Leia (and Luke) faced with Vader in the original trilogy.

It's clear that Rogue One is a film very much made to fit into the overall canon of the Star Wars universe, complete with the sort of references that will no doubt have viewers roaring in applause. But it's also obvious that it's taking a new path in continuing to establish the new set of Star Wars films as exploring modern reinventions of that canon. I absolutely cannot wait to see just what form these references and reinventions take when Rogue One: A Star Wars Story comes to theaters on Dec 16.