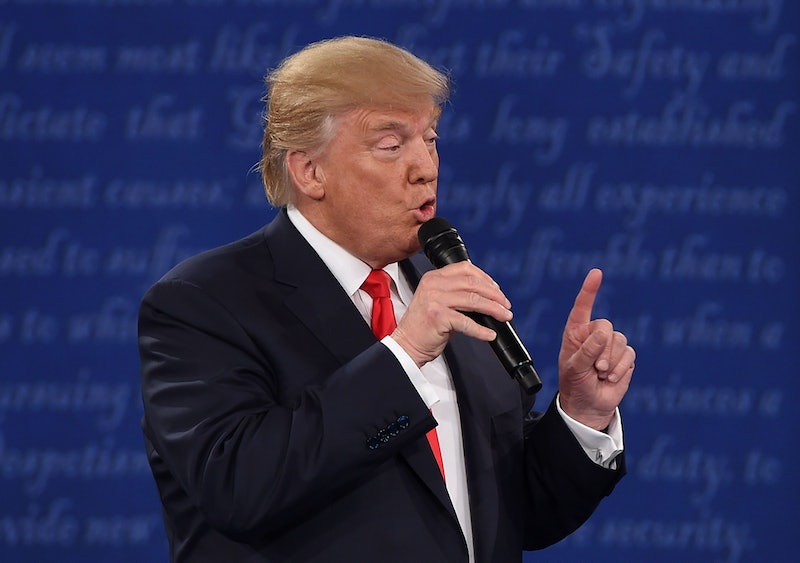 On Wednesday night, an video surfaced in which Donald Trump makes a lewd joke about a 10-year-old during a 1992 Entertainment Tonight Christmas segment filmed at the Trump Tower. In the segment, the then 46-year-old Trump was shown talking to a group of girls around age 10, at one point in the video Trump asks a 10-year-old girl if she's also going up the elevator, before turning to the camera and joking, "I’m going to be dating her in 10 years. Can you believe it?"

While Trump was able to pretend his predatory comments were a joke because his sexualization of the 10-year-old girl was couched in the hypothetical of dating her in the future, Trump has a larger pattern of making inappropriate comments about underage girls that he justifies through hypothetical language. Buzzfeed reports that multiple former Miss Teen USA contestants have alleged that Trump walked into dressing rooms where girls were changing and got away with it; however, because it was his pageant, his behavior was masked as part of the job.

The Republican presidential candidate's pattern of skewing lines of sexualization with underage girls, both in language and reality, is neither limited to the segment on Entertainment Tonight or his time running the Miss Teen USA pageant, but has spilled over into the ways he talks about his own daughters, Ivanka and Tiffany.

In a 1994 Lifestyles of the Rich and Famous interview which was recently dug up by The Daily Show, when the host Robin Leach asked Trump what traits Tiffany inherited from him, and which traits were inherited from Marla his response was: "Well, I think that she's got a lot of Marla. She's a really beautiful baby, and she's got Marla's legs." The comment about Tiffany's baby legs was then followed up by Trump gesturing his chest and speculating on whether his baby daughter would inherit his wife's breasts or not, he said: "We don't know whether she's got this part yet, but time will tell."

Once again, Trump's inappropriate statements about a child, no less his daughter, were conveniently couched in the hypothetical of her potential attractiveness in the future.

In a Howard Stern interview in 1999, while talking about his family, Trump told the host he had promised his daughter Ivanka, then 17 years old, that he would never date anyone younger than her:

I have a deal with her. She’s 17 and doing great — Ivanka. She made me promise, swear to her that I would never date a girl younger than her. So as she grows older, the field is getting very limited.

As if the lines of incest and age-appropriateness weren't skewed enough, in a 2006 interview on the ABC talk show The View, when he was asked what he'd do if his daughter posed for Playboy, Trump joked he would date Ivanka if she wasn't his daughter:

Although she does have a very nice figure. I’ve said that if Ivanka weren’t my daughter, perhaps, I would be dating her.

Ivanka was sitting next to her father while he said this, and once again, Trump's inappropriate sexualization of young women, no less his own daughter, was couched in the joking hypothetical terms as a means of being let off the hook.