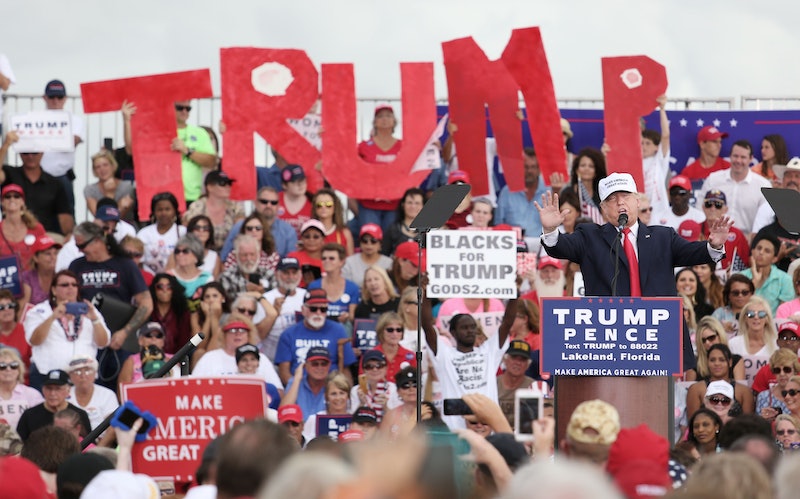 With stories seemingly breaking by the minute of women coming forward to accuse Republican presidential nominee Donald Trump of sexual assault and untoward advances, many observers are considering this moment the death knell for his campaign. But losing his bid for the White House could be the least of his worries: could Trump go to jail if convicted of charges brought by his accusers? Could charges even be brought at this time? Trump has consistently and adamantly denied every allegation against him. For this and other reasons, the premise of looking at his jail prospects is very speculative, but people have been wondering what could happen as more people come out with inappropriate accounts about the Republican presidential nominee.

The short answer is yes, he could potentially face jail, but because the number of accusers and variety of abuses keeps growing, it’s hard to pin down exactly how it would go, and for each accusation, the law applies in slightly different ways. Trump, on Thursday, adamantly denied all of the accusations against him. Trump told a rally in Florida, "These vicious claims about me of inappropriate conduct with women are totally and absolutely false." He added, "These claims are all fabricated. They're all fiction and they're outright lies. These events never ever, ever happened."

One of the more straightforward allegations — at least, as far as how a prosecution would proceed — is that of Jessica Leeds, who accused Trump of touching her inappropriately on an airplane in the early 1980s which he denies. As reported in the New York Times, Leeds was allegedly sitting in first class next to Trump when he allegedly began touching her without her consent; eventually, Leeds said, claimed she fled to the back of the plane. According to the New York Times, Trump completely denied the incident in a phone call, saying “None of this ever took place" and told the reporter, “You are a disgusting human being."

Because the alleged assault took place on an airplane, the federal criminal code would apply. This is important, because under federal law, there is no statute of limitations on sexual assault charges (so even 30 years after the fact, perpetrators can still face prosecution). If charged and convicted of abusive sexual contact under 18 U.S.C. § 2244(b), Trump could face up to two years in prison, but Trump has not been charged and Leeds has given no indication she will press charges.

The various state laws that would apply to other accusations levied against Trump if they become charges are not as clear cut. For instance, the allegations by Mindy McGillivray, who accused Trump of groping her 13 years ago, need Trump exist response would most likely not result in criminal prosecution if she pressed charges. That is because, depending on the classification of the alleged assault, the statute of limitations would have expired between two and four years after the alleged assault. The Palm Beach Post, which broke the story, reached out to Trump but he did not respond. One can conclude that this account falls under Trump's full denunciation of all the allegations from Thursday.

Among the most serious allegations against Trump, however, are the ones involving minors. On Wednesday, a federal judge ordered the GOP nominee’s counsel to appear in court regarding the civil suit tied to allegations that Trump raped a 13-year-old girl in 1994. Trump has forcefully denied the allegation, and reporting by The Guardian has linked the lawsuit to a former TV producer well-known for making extreme claims about celebrities. To be clear, no charges have been brought against Trump. When the federal lawsuit regarding this alleged incident was filed this summer, a lawyer for the Trump Organization told The Guardian,“This is basically a sham lawsuit brought by someone who desires to impact the presidential election.”Still, statutory rape charges carry a minimum sentence of 30 years, and a maximum of life in prison.

The fallout from these latest accusations appears to be far from over: even though Trump has taken a hit in the polls, FiveThirtyEight still gives him a 16.7 percent chance of winning the election — which just is to say, they aren’t willing to count him out completely at this point. Still, never has the phrase “anything could happen” felt more descriptive of our current political moment.