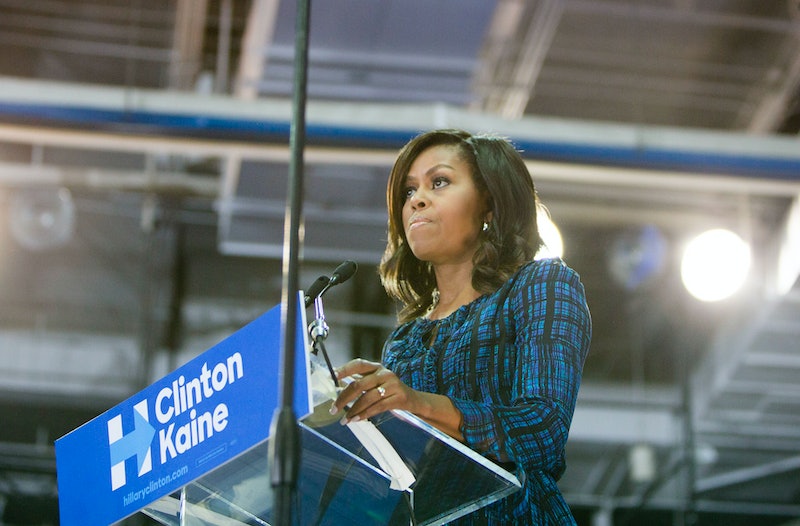 Over the last eight years, First Lady Michelle Obama has rightfully earned a spot in our hearts as one heck of a woman. She is a powerful role model; a fervent advocate for family health, education, and equal rights for all; and so much more. And these quotes from Michelle Obama's speech about Donald Trump remind us how monumentally vital it is to choose a leader who promotes equality, love, and freedom for all — not a person who freely exercises a misogynistic, racist, sexist attitude.

On Oct. 13, Obama spoke at Southern New Hampshire University in Manchester in a heartfelt speech about the importance of voting, and just how dangerous Donald Trump is for America and its citizens. While Obama has always been a powerful speaker, this speech is already being hailed as one of her best. It was not merely part of the campaign for Democratic presidential nominee Hillary Clinton. It was an urgent plea for all of us to think about our nation's children — our future — and what kind of example Trump sets, frequently referencing more of his horrible comments that have recently come to light. "This was a powerful individual speaking freely and openly about sexually predator behavior," she said.

Here are some of her most memorable quotes regarding Trump's behavior and attitude toward women.

1. On The Pure Shock That This Person Is Even A Candidate

To me, this entire election season has felt more like a trashy reality TV show than the journey to elect the next leader of our beautiful country. And Obama echoed this sentiment in discussing Trump's shockingly negative and 100 percent unacceptable perspectives and behavior.

2. On A Solidified Pattern Of Behavior — Not Just One Mistake

We all say things we shouldn't. We're all human — and that includes presidential nominees. What's more, it's expected that people are going to dig up the absolute best and worst things that they can find on Trump, Clinton, and every other politician as they make their decisions about who to vote for. But this was not one isolated incident. It's a repeated pattern. And that speaks volumes about the kind of person Trump is.

3. On Women Being Treated As Objects, With No Voice Or Say

Trump's actions have framed women in a light that once again turns us into passive objects. We don't get to take action. Action is taken against us. And the fact that Trump would like us to sit idly by and accept it is humiliating and degrading.

The shameful comments about our bodies. The disrespect of our ambitions and intellect. The belief that you can do anything you want to a woman. It is cruel. It's frightening. And the truth is, it hurts. It hurts.

4. On Women Being Afraid Of Appearing Too Emotional

We already hold back on expressing our opinions because of the stereotype making women look overly emotional when they get upset or mad or frustrated. We're supposed to stay composed, calm, cool as a cucumber. But it's that exact attitude that perpetuates the belief that Trump's behavior is acceptable.

Maybe because we think that admitting how much it hurts makes us as women look weak. Maybe we're afraid to be that vulnerable. Maybe we've grown accustomed to swallowing these emotions and staying quiet.

5. On Matters Of Right And Wrong — Not Politics

Regardless of your political stance, answer me this: When is it ever acceptable to treat, touch, and speak to women (or anyone else, for that matter) in a hurtful, degrading, predatory, harassing manner? When is it acceptable to criticize them and judge them for their weight? If someone spoke to your mother, your girlfriend, your daughter, the way Trump has spoken to women... what would you do? It is beyond the point of politics.

Too many are treating this as just another day's headline. As if our outrage is overblown or unwarranted. As if this is normal: just politics as usual ... be clear, this is not normal. This is not politics as usual. This is disgraceful. It is intolerable. And it doesn't matter what party you belong to — Democrat, Republican, Independent — no woman deserves to be treated this way ... It's about basic human decency. It's about right and wrong.

6. On How Trump Negatively Impacts Young And Impressionable Girls

From the time of childhood, girls (and boys, and all kids) are learning about their own worth and self-esteem. Parents and caregivers do what they can to instill a sense of value in children. Is that the message kids will get from Trump? What kinds of adults will these children grow up to be?

If all of this is painful to us as grown women, what do you think this is doing to our children? What messages are our little girls hearing about who they should look like, how they should act? What lessons are they learning about their value as professionals, as human beings? About their dreams and aspirations?

7. On How Women Are Not The Only Ones At Risk

If Trump's disgusting words are dismissed as locker room chatter, if we approach his talk with a "boys will be boys" attitude, then we assume that men in general talk like Trump. Men, do you agree? Does this describe you? Furthermore, is this really the example we want to set for young boys?

And how is this affecting men and boys in this country? Because I can tell you that the men in my life do not talk about women like this, and I know that my family is not unusual. And to dismiss this as everyday locker room talk is an insult to decent men everywhere.

8. On The True Meaning Of A Role Model

There is enough fighting in this world. Enough hate, enough war. The role of a nation's leader is to bring his/her people together — not pit them against each other even more. How can we stand united and move forward as a country if we have a leader promoting hate and prejudice? We are stronger together.

9. On The Kind Of Men We Want In Our Lives

Would you ever welcome a man like Trump into your home? Would you ever leave him alone with your children? We wouldn't tolerate this behavior from a husband, boyfriend, son, father, uncle, neighbor, employer. Why would we tolerate it from the leader of our country?

The men that you and I know don't treat women this way. They are loving fathers who are sickened by the thought of their daughters being exposed to this kind of vicious language about women. They are husbands and brothers and sons who don't tolerate women being treated — demeaned and disrespected.

10. On Recognizing This Will Have Long-Term Repercussions

The last few months of Trump have been nausea-inducing. I'm ready to crawl in a hole until it all ends. We try to keep children away from the TV and internet because his words are inappropriate. What happens if we get stuck with this for four years?

And we simply cannot endure this, or expose our children to this, any longer. Not for another minute, let alone for four years.