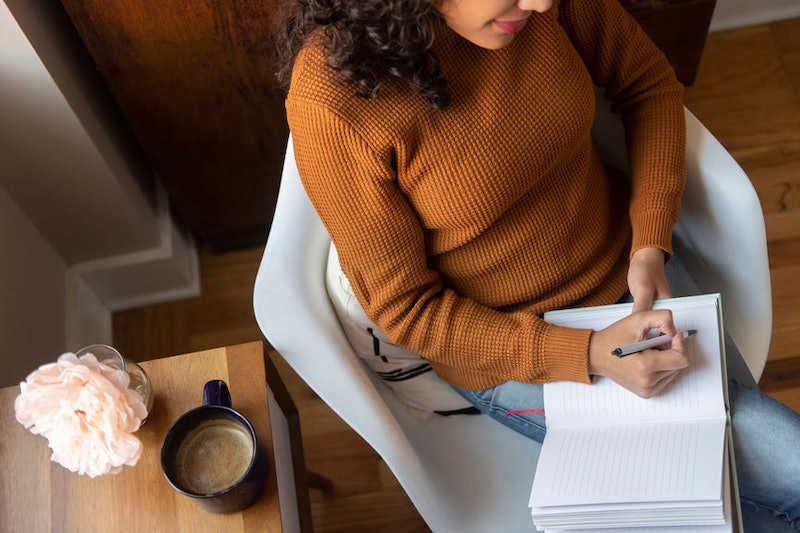 When I was a little girl, desperate to find my place in the world, I made friends with the imaginary people inside my head. From the time I could hold a pencil, I wrote; furiously and with a fervor attained by a childhood where I did not, could not fit, in no matter how I tried. Writing became my greatest escape, allowing me to conjure any world I wanted, where I knew I’d be accepted, where I felt like I belonged.

My younger brother was born three years after me with milky skin, hair spun gold, and eyes rivaling the crystal waters of The Atlantic. I always felt my golden, olive skin, ebony hair wild with reckless abandon, and almond-shaped, slightly darker (albeit more compassionate) eyes, outmatched in every way. His wailing cries came screeching into the world, everyone around marveling at the perfection, while my earlier entrance was subdued. This speaks volumes to just one of our many differences. Marred by imperfections, some visible and others — ones that sculpted my fears and insecurities — only felt on the inside, I never felt to be enough of anything for anyone. It was evident who deserved adoration (him) and who might awkwardly flail through life as if having been pushed off a cliff (me).

To cope with out-of-body feelings, I couldn’t verbalize, I wrote. About dreams I had. Imaginary boys I pretended to date. How I fit into my complex family unit. Where, in the vast universe, I was supposed to leave my mark. What was my mark? I wrote, hoping answers would swoop down in front of me so that everything I questioned could somehow make sense.

Where, in the vast universe, I was supposed to leave my mark. What was my mark?

The perplexities mounted until one day, my little heart discovered something catastrophic: my brother’s father was not mine. I felt validated in my doubts and a foreign misfit all at once. If I wasn’t his child, whose was I — who was I? Suddenly, in this great, big world, I had two histories and no place at all.

I had two histories and no place at all.

This question —who am I— would be the genesis of a new journey, splitting my life into two parts: before the truth, and after. I poured myself into fictional family sagas, both reading and writing, pretending mine did not exist and maybe I did not exist. I remember those loose-leaf pages I’d tossed into the garbage, bearing my plea for my brother’s milky skin, my brother’s gold-spun hair, my brother’s crystal eyes that rivaled The Atlantic, so I didn’t have to feel so eternally restless and so very, very alone.

I fought the urge to find my biological father. Continually asked “What are you mixed with?” I’d humor the asker with a writhing smile and a quip or anecdote to ease the discomfort of never really saying the true words aloud — I am Puerto Rican — because then, I wasn’t ready to reconcile the story of him, the story of me. If I could’ve rewritten all of this into something easier, something that carried less weight, I would’ve. I felt ashamed for simply existing and didn’t yet know how powerful my narrative would later become, not in spite of having a different heritage than my brother—because of it.

With time, I began to accept these truths. The pen and paper, my greatest allies, wrangled all my thoughts and insecurities, forming them into something useful to draw attention off the insensitive questions I’d grown tired of answering. I filled dozens of journals with haikus, poems, and stories about kids who felt uncomfortable inside their own skin. Kids who embraced the unusual, the peculiar, and the exceptional; kids who could change the world if others looked past the obvious. I wrote so I could see I wasn’t alone, even if I had to imagine and create those like me on the paper.

The pen and paper, my greatest allies, wrangled all my thoughts and insecurities, forming them into something useful to draw attention off the insensitive questions I’d grown tired of answering.

At sixteen, I felt ready to reconnect with my father, if only to let the what-ifs fade. We went to dinner one night — me and this man who looked like me with equally matched dark skin and hair; eyes beautifully angled, and a laugh that still haunts my dreams — and afterwards, I decided not to pursue the relationship. I realized through the awkward conversations, there was a wound still gaping his presence could not heal, as it was his absence that created it.

Years later, as I settled into the maturity I’d lacked previously, I had one child, two miscarriages, and was pregnant with another — my son — and decided to look for him again. The pain had never dissipated; I’d made a mistake in letting my father leave again. I wanted to know about my family tree so I could tell the tales to my heirs. After months of searching, I discovered the night I’d met him for dinner years prior, he’d been living with cancer (and didn’t tell me) and had passed away years before this search. In his obituary, I’m listed as his only child. This further cemented the validity in my existence, in my new narrative. It gave me a different perspective than I’d had in previous years — a responsibility to learn who I am and where I came from.

Devastated, I read about death and grief but still couldn’t accept that I’d never get the answers I needed. I wrote and wrote and wrote, just like all the times before only, now, there was more urgency; desperation and regret. I wrote stories about our fictional memories. Songs from a father to his daughter. Poems of a pain that ripped me into pieces. I wrote letters—many of them—to my paternal grandmother, hoping it could somehow fill my father’s void; hoping she could tell me about our heritage. Every day, a new letter. Every day, a new hope; a new void I needed filled. I put all my faith into writing, letting the tormented words escape from my soul because it’s all I had left of him. Though, as the days passed, my mailbox remained just as empty as I was.

Devastated, I read about death and grief but still couldn’t accept that I’d never get the answers I needed. I wrote and wrote and wrote, just like all the times before only, now, there was more urgency; desperation and regret.

Once my son was born, I penned one last letter. I wanted my grandmother to know I wouldn’t write again if she didn’t respond. Writing became something I dreaded, resented, for its betrayal against my many years of loyalty. I wanted no part in the stories my imaginary friends wanted to tell, not a drop left of tears to shed over their sagas. I’d lost faith in everything; nothing more than myself. I should’ve embraced my heritage when I first found my father and accepted my unique perspective in life. Instead, I held onto one end of a thread and let it go.

About a month later, my grandmother responded and even sent a picture further proving I am his. Words hold more power than I believed. They create journeys characters will travel, fill bookshelves with stories children of all colors can see themselves in, and those words—my words—eventually changed a woman’s heart into accepting me as her family. I now fully understand the mark I’m to leave and, however conflicted, it’s been there all along. My voice, my narrative, my words. Because I’m the only one who can tell my story, and you’re the only one who can tell yours.