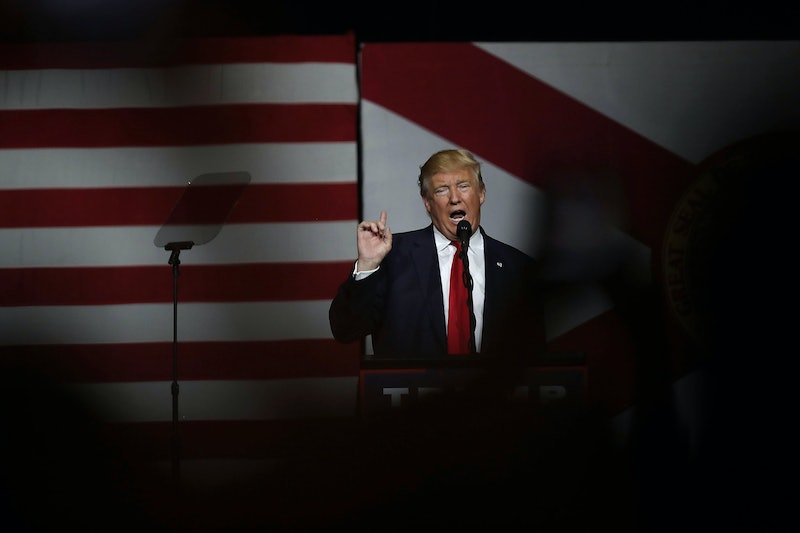 The revelations from the 2005 conversation Donald Trump had with former Access Hollywood reporter Billy Bush have thrown some major hurdles into the Republican presidential nominee's campaign. The vulgar manner in which Trump talked about being able to kiss and touch any women he wanted to because of his celebrity status has incensed countless voters, and some are making their opposition to Trump visible through their Facebook profile photo. And for those who wish to add the "Women Can Stop Trump" logo to their Facebook photo, or find out more information about it, you can do so via Twibbon.

The trending hashtag #WomenCanStopTrump can be attached to your Facebook or Twitter profile picture via the Twibbon link found here. The hashtag has been going viral this past week, with people using the social media campaign to hold Trump accountable for his horrifying comments about women. Some are using the platform to compare Trump's leaked comments and the fallout from the scandal to the rise of rape culture on college campuses, and the online campaign currently has more than 9,000 supporters listed on their site.

The online campaign has a specific goal in mind: to stop Trump from being elected in November. It is a project of the Emily's List organization, a group that works to elect "pro-choice" Democratic women into office. As written on the website, "Women made up 53% of voters in 2012, and if we turn out again to vote this year we can single-handedly stop Trump. Join our fight."

Also fueling the discussion is the much-celebrated speech first lady Michelle Obama gave earlier Thursday at a Hillary Clinton campaign rally in New Hampshire. During the speech, she denounced Trump and the recent leaks, pointing out that the circumstances of this scandal-ridden campaign are "not normal."

"It has shaken me to my core in a way that I couldn’t have predicted,” Obama said at the rally. “This is not politics as usual.” She added more impact to her speech by adding that “strong men don't need to put down women to make themselves feel powerful." Those statements as well as the @FLOTUS Twitter handle were re-tweeted Thursday by women who are part of the online campaign opposing Trump.

Such opposition to the Trump campaign has intensified after the 2005 leak, in which Trump seemed to brag about being able to touch or fondle women. "When you’re a star, they let you do it,” Trump is heard saying on the video. Trump issued a public apology, in advance of the second debate, yet continued to dismiss the recording as "locker room talk." Since the revelation, at least four women have come forward alleging they were inappropriately touched or kissed by the celebrity billionaire without their consent. Trump and his campaign have vehemently denied each allegation.

Campaigns like Women Can Stop Trump are likely to attract more followers as the third and final debate draws near. And for those who oppose Trump and want to spread the word via a Facebook profile pic, the Twibbon option will likely be a go-to choice as election day looms closer and closer.