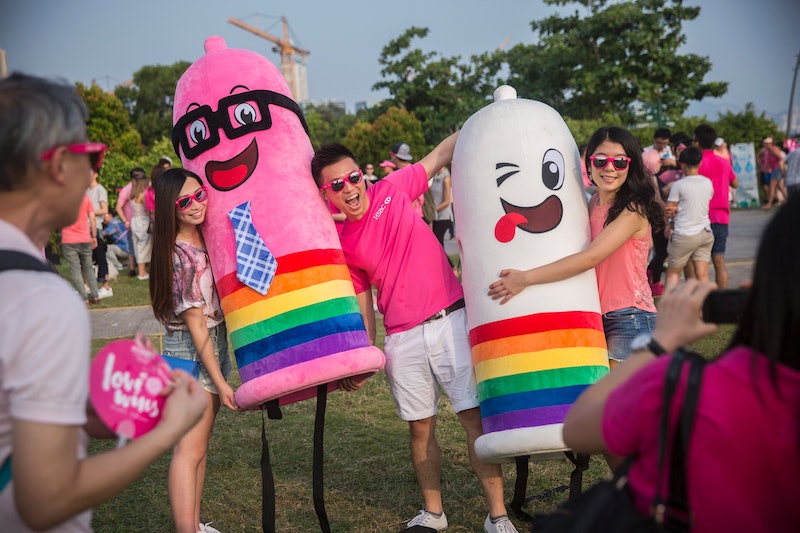 This election season, Californians are facing a veritable forest of state propositions, and they're deciding on everything from the death penalty to marijuana to... condoms? Proposition 60 — a state bill that would require, among other things, condom use in any adult film produced and distributed in California — is getting a lot of attention in some circles, especially in light of Los Angeles' Measure B, a 2012 measure that required porn performers in Los Angeles County to wear condoms during sex scenes. Though supporters of the bill, like organizations Yes on Prop 60 and AIDS Healthcare Foundation (which is sponsoring Proposition 60) say that the bill will help protect workers from on-set danger, I talked to some activists and actors within California's adult film community to get the scoop on what they really think about Prop 60, and found that many felt it created potential hazards for adult film performers and creators. (Michael Weinstein, president of the AIDS Healthcare Foundation, and the Yes on Prop 60 campaign did not respond to Bustle's request for comment.)

All of this begs the question: What exactly is Proposition 60? Mike Stabile, spokesman for the Free Speech Coalition, a lobbying group that represents the adult entertainment industry and opposes Proposition 60, tells Bustle that this bill, as presented to voters, might initially seem reasonable to people who aren't familiar with the porn industry, as it seems to just require adult performers to wear condoms. "[Condoms] are good," he says, but "not the gold standard that they might be in your private life." While no one who opposes Prop 60 opposes condoms, they bring up a good and often-overlooked point: While condoms are an excellent safer sex measure for people in the real world, they do not make sense for the way most adult film performers have sex.

"Entertainment's job is not education," says Hartley. "Pornography is a live action cartoon, like [pro] wrestling: It’s not meant to be real. It’s a heightened fantasy, escapism. [If Weinstein] wants to advocate rightfully for age-appropriate comprehensive sex ed in schools: I would go with you on that!"

"In an otherwise fractious business full of independent young people, we have an industry-wide adherence to a voluntary testing program," says Hartley. "We should be written up as an incredible success story on community health support, risk mitigation, and harm reduction."

In fact, earlier this year, the FSC and the AHF each presented competing petitions for new bloodborne pathogens standards on adult film sets to California's Occupational Health and Safety Administration (CAL-OSHA), which will be hearing them on Nov. 10, according to a CAL-OSHA spokeswoman, who said the agency is unable to comment on pending or proposed legislation.

To start with, the proposition has a very unusual clause declaring that AHF president Michael Weinstein has a "direct and personal stake" in the law and that in the event it is challenged in court and the state declines to defend it, California taxpayers will be required to pay Weinstein to furnish the defense. (Michael Weinsten did not respond to Bustle's request for comment.) And, as the Sacramento Bee noted, "The language gets stranger. The proponent would become a state employee who would take the official oath of office, could only be fired by a majority vote of the Legislature for 'good cause,' and would be indemnified by the state for actions related to defending the initiatives."

This proposition would also require all producers to get a license, and to issue a notice of filming for each production. They'd need to meet onerous requirements for STI testing, monitoring, and treatment that don't, Hartley says, reflect evidence-based harm reduction practices, and would require use of barrier protection in any situation where fluids and mucus membranes might linger.

"Why would you try to legislate public health through a ballot initiative rather than through the regulatory process?" asks Stabile.

Given the stigma surrounding sex work, the possibility of having your legal name and home address made public is dangerous: People who work multiple jobs often don't want their "straight" jobs hearing about their sex work, and sex work can be used as grounds to declare someone an unfit parent, or to harass someone, just as a history of adult work can exclude someone from straight employment. Stabile noted wryly that if he was going to be cynical about it, "I would bring suit against the weakest link, the ones with the least resources."

Letting an industry regulate itself should always ring alarm bells — but in this case, the industry has a vested interest in reducing STI transmission, and it's eager to work with the state to collaborate on public health-driven regulations that balance best medical practice with the unique conditions of the industry for positive results. And it is worth noting that, in addition to the FSC, the state's Democrats, Republicans, and Libertarians have all registered opposition to the proposition. Equality California, the Courage Campaign, the San Francisco AIDS Foundation, and Sex Workers Outreach Project USA are also against it, among many others. So are the seven largest newspapers in California.

The bottom line of the debate over Prop 60 may come down to this: "Trust us," says Hartley. "We are taking care of our bodies."