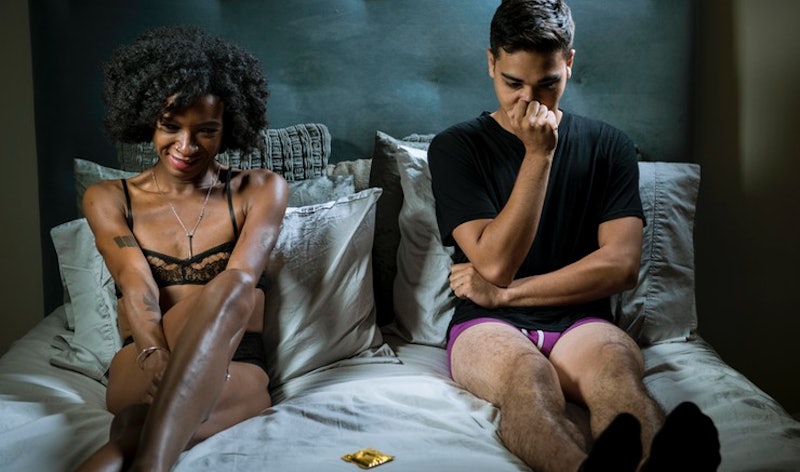 Now, condoms are fundamentally good, so what's the problem with using them in porn? Well, some people don't like the look of them, which I don't think is a good enough reason. But the other arguments are perhaps more convincing. "We took the site dark because we wanted to draw attention to the fight performers are waging against Proposition 60," Michael Stabile, spokesperson for Kink, tells Bustle. "Prop 60 would give any resident of the California — anyone with a laptop who views an adult movie — the power to sue performers if a condom isn't visible. If Prop 60 were to pass, we and many other companies would just begin blocking California IP addresses, rather than leave our workers open to harassment and a flood of litigation."

But What Message Does This Send Viewers?

On the other hand, condoms obviously promote (and provide) safe sex. And there has been research that suggests seeing porn without condoms makes you more likely to have unsafe sex yourself, while condoms might encourage safe sex. That's a massive thing. Research in the PLOS One Journal by Dr, Eric Schrimshaw from Columbia University's Mailman School of Public Health and Dr Martin J. Downing, Jr. from the Public Health Solution found this to be the case. "We suspect, and our findings suggest, that viewing condoms in pornography leads viewers to have fantasies where condoms are used and reinforces condom use as normative behavior," Scrimshaw tells Bustle.