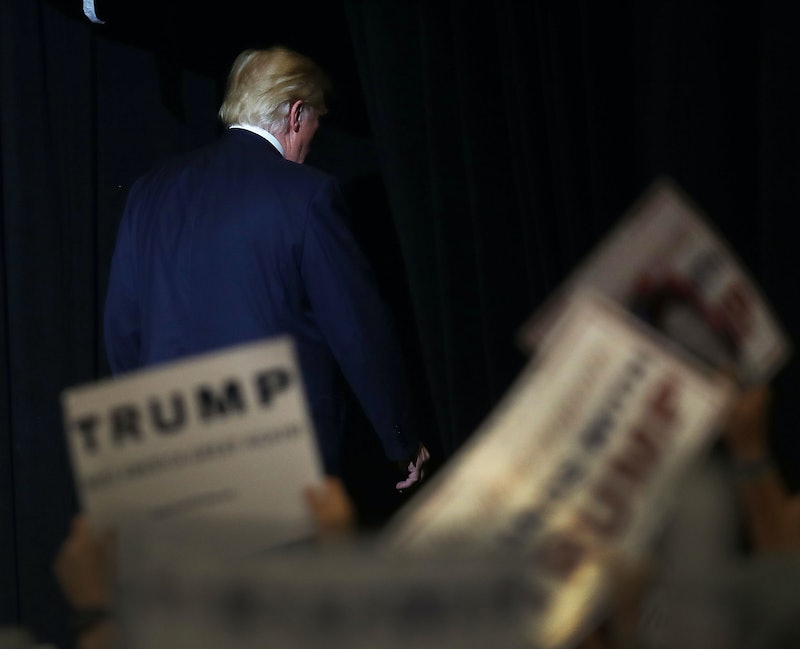 It definitely hasn't been the best of weeks for Republican presidential candidate Donald Trump. Between the Access Hollywood hot mic tape leak, the fallout from his attack on a former Miss Universe, and at least four new allegations against the GOP nominee, some are wondering if Trump will skip out of the third presidential debate.

While there is no concrete answer to this yet, comments made by Trump during a Florida rally on Wednesday suggest that he might be thinking about opting out of the debate. "I have no respect for that group, by the way, I’m done,” Trump said of the Commission for Presidential Debates (CPD). Trump blasted the CPD as "a rigged deal" and criticized CPD co-chair, Mike McCurry, who was Bill Clinton's press secretary for three and a half years, for allegedly being partial to Clinton. Trump did not mention the other CPD co-chair, Frank Fahrenkopf, was chair of the RNC during Ronald Reagan's presidency.

However, Trump's spokesperson Jason Miller told Daily Beast reporter Olivia Nuzzi that he does plan to attend the Oct. 19 debate, which will be held at the University of Nevada-Las Vegas.

Trump bowed out of a primary debate after engaging in a highly public feud with Fox News anchor Megyn Kelly, who was moderating the upcoming debate. He instead held his own event, and said he would donate the proceeds to veterans. However, he hasn't skipped a debate since then, despite his statements alleging "the system" is rigged.

The recent revelations from the 2005 hot mic tape, during which Trump brags about being able to grope women without consent, have cost him a number of Republican supporters. Several GOP lawmakers, for example, have pulled their support for Trump. The fallout is also prompting some to question whether the Republican candidate will cave under such conditions. Even so, the GOP nominee has repeatedly said he "is in it to the end," and recently told the Washington Post that he would not withdraw from the race.

“I’ve never withdrawn in my life. No, I’m not quitting this race,” Trump said. “I have tremendous support.” This does lend one to believe that Trump will indeed show up to the third and final debate, but in such a volatile campaign, it's still too early to be sure.

More like this
Buckingham Palace Shuts Down Rumour About King Charles III's Coronation
By Sophie McEvoy and Sam Ramsden
Romance Authors Are Mobilizing For Reproductive Rights
By Natalia Perez-Gonzalez
New Coins Unveiled As King Charles III's Reign Gets Underway
By Sam Ramsden
Amazon Sneakily Put These Popular Things On Sale: Here's What You Don't Want To Miss
By BDG Commerce
Get Even More From Bustle — Sign Up For The Newsletter