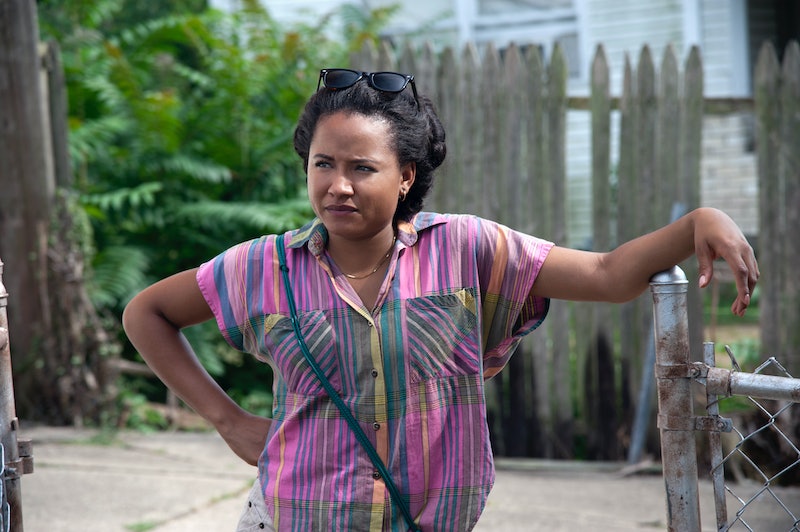 The Lifetime film Surviving Compton: Dre, Suge, & Michel'le aims to show another side of the early hip hop scene portrayed in Straight Outta Compton, mostly through the eyes of singer Michel'le, whose R&B vocals made her a successful artist. One of the most distinctive things about the trailer for the upcoming film is Michel'le's speaking voice, which is mocked by the movie's versions of Suge Knight and Dr. Dre, and they later appear shocked when they hear her powerful pipes singfor the first time. In reality, what does Michel'le's voice sound like? Her singing voice is evident if you've ever heard her eponymous album, which includes her biggest hit, "No More Lies," but you may not be as familiar with her speaking voice.

As the Surviving Compton trailer shows, Michel'le has a distinctive way of speaking that doesn't sound much like her singing voice. Rhyon Nicole Brown, who plays Michel'le in the Lifetime movie, exaggerates the effect, bringing it up to an almost squeaky register, but Michel'le's high-pitched voice really does sound similar to that. It's been evident anytime she's been interviewed since rising to fame in the '80s, including long conversations like the one with The Breakfast Club radio show from early 2015 below.

Then, there's Michel'le's singing voice. In the Surviving Compton trailer, Dr. Dre and Suge Knight, who were Michel'le's biggest creative collaborators and two of her romantic partners, are shocked to hear her sing in the studio for the first time, because her speaking voice is so different from the way she can belt out the hook to a song.

The best comparison is probably the vocals on "No More Lies," which you can listen to below, as the song combines her natural speaking voice with her deeper singing voice to create a hybrid between R&B and hip hop.

The difference between Michel'le's speaking and singing voice is even more pronounced in her later work, like "Something In My Heart." She's working some real Whitney Houston-inspired hair in the music video, and sings some Whitney-inspired riffs as well.

Michel'le has talked about why her voice sounds so different when she's singing versus when she's speaking, and said in an interview with Vlad TV that there's a scientific explanation. She credits both "speaking over [her] larynx" and the fact that when she sings, it comes from deep in her diaphragm with the difference between her two voices.

She also told Vlad TV that speaking up has always been hard for her. She didn't speak as a young child out of what she credits as extreme shyness, but said that after she began singing, she found a voice. It's a bit more metaphorical, but in a way, Michel'le speaking voice is finally getting its due, as she'll be telling her own story in Surviving Compton.