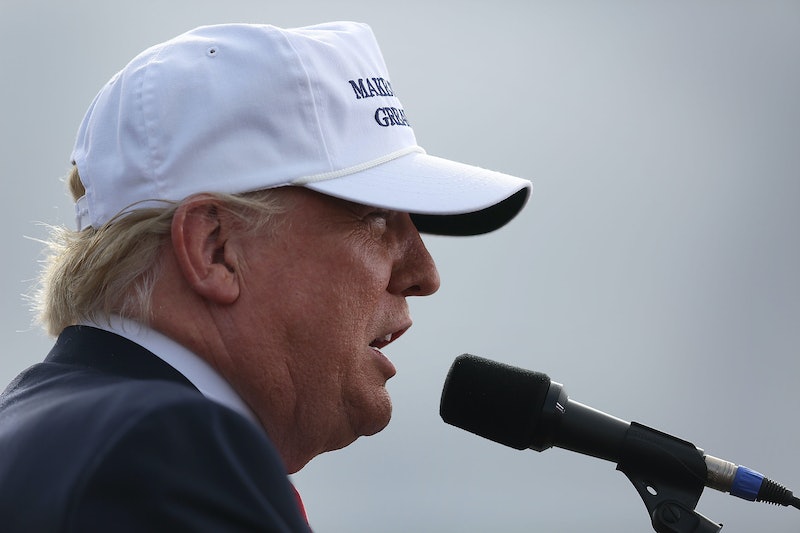 On Wednesday and Thursday of this week, three women went on record to allege that Donald Trump touched them without consent — an allegation Trump has strongly denied, saying, "None of this ever took place.” And with election day less than a month away, some people are, unfortunately, questioning the timing of the allegations. But asking these women why they didn't say this before is one of the worst responses possible, and it perpetuates a culture of victim-blaming.

In the United States, rape and sexual assault are widely underreported. "Eighty percent of rapes and sexual assaults against college women aren’t reported to police," according to a 2014 Department of Justice report. The disparity between rapes reported to the National Intimate Partner and Sexual Violence Survey, to which people self-report assaults, and FBI data, which comes from incidents reported to law enforcement, was more than a million incidents.

Clearly, the vast majority of sexual assaults that happen aren't being reported to police. And, even if the incidents are reported, sexual assault survivors face many barriers to justice. In some states, for example, untested rape kits are even thrown out without notifying the survivor. Not to mention, women are oftentimes asked why they didn't report the incident earlier — a question that indirectly places blame upon the victim.

Far too often, women are hesitant to report rape or sexual assault for fear of reprisal, belief that law enforcement could not or would not do anything to help, and a feeling that the crime isn't "important" enough, according to the Maryland Coalition Against Sexual Assault. And there's only one reason anyone should ask a woman why she didn't report an incident earlier: to better understand how to not make sexual assault victims feel as though they must defend themselves. Even then, no woman should feel obligated to explain why she waited to recite what must be an incredibly painful experience.

The two women profiled in the Oct. 12 New York Times piece, Jessica Leeds and Rachel Crooks, reported having similar reasons for not coming forth earlier.

"During the late 60s, 70s, and into the 80s, culture had instilled in us that somehow it was our fault, the attention that we received from men," Leeds, now 74, said on camera. "That we were responsible for their behavior. You didn’t complain to the authorities, you didn’t complain to your boss. If something happened to you, you just bucked up and you went on."

And more than two decades later, a woman who worked in the same building as Trump in 2005, Rachel Crooks, said she felt unable to report Trump, the Times reported. Crooks alleged he forcibly kissed her.

“I think that what was more upsetting than him kissing her was that she felt like she couldn’t do anything to him because of his position,” her boyfriend at the time, Clint Hackenburg, told the Times. “She was 22. She was a secretary. It was her first job out of college. I remember her saying, ‘I can’t do anything to this guy, because he’s Donald Trump.’”

These women decided to report the allegations despite the inherent risk that comes along with accusing a billionaire presidential nominee. As Times reporter Michael Barbaro pointed out, both Leeds and Crooks went on record with their names, something that could potentially open them up to threats and lawsuits.

And as for the timing of the allegations? "I would like to think that sharing this story would make a difference both in the election and in society’s view of women to change some of the sexual behavior between men and women in both directions," Leeds told the Times, saying she had begun telling her story a year and a half ago when she realized Trump was running for president.

“People should know this behavior is pervasive and it is real," claimed Crooks, who was initially "reluctant" to tell her story, but felt "compelled" nonetheless, according to the Times.

Their accounts of their alleged assaults include shockingly similar moments to what Trump described in his 2005 hot mic tapes. "You know I’m automatically attracted to beautiful — I just start kissing them, Trump was recorded saying. "It’s like a magnet. Just kiss. I don’t even wait." He also uttered the now notorious "Grab them by the pussy," line at that time. (Trump denied he ever acted upon these urges, saying, "I don’t do it; it was locker room talk,” the Times reported.)

Survivors of sexual assault face concrete struggles in revealing the horrific events that happened to them, including feelings of guilt, fear, and hopelessness. It is understandable why a survivor might not report what happened to them immediately. Even if you want to see a trial or concrete evidence before believing the allegations against Trump, it's important to think about what kinds of struggles these women are going through to put forth their stories.