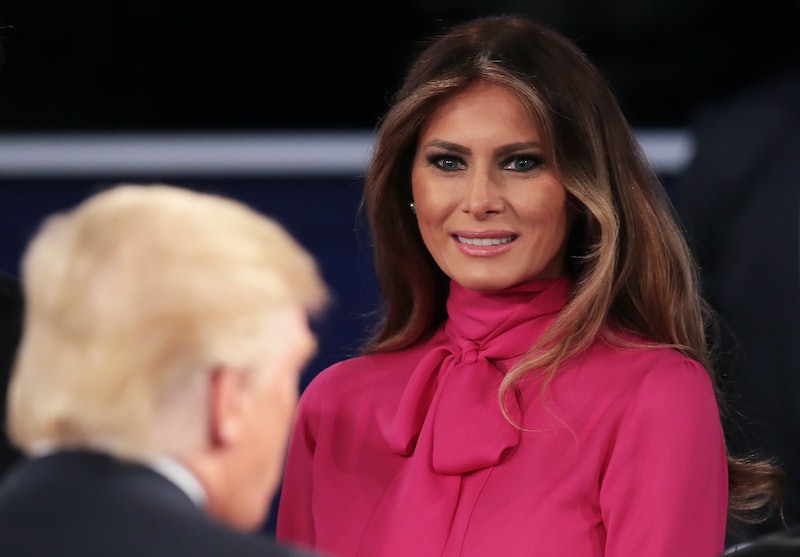 Melania Trump, who kept a relatively low-profile during Donald Trump's campaign, has appeared alongside her husband for both the first and second presidential debate. After the 2005 Access Hollywood tape was leaked and went viral, Melania insisted that her husband was still leadership material, even though she denounced his comments. Seeing as she has continued to maintain support for him, Melania will probably be present at the last debate and continue to publicly stand by Trump.

While it may be too soon to tell if she will appear at the third debate, Melania has stuck with her husband throughout the campaign. After the 2005 tape with Billy Bush went viral last week ahead of the second debate, Melania released a statement saying that while Trump's words were “unacceptable and offensive,” the words heard on the tape did not "represent the man that I know. He has the heart and mind of a leader."

She made a bold appearance at the heated second debate, wearing a hot pink outfit, with special attention being drawn to $1100 Gucci shirt, which is called a "pussy-bow" top. While a Trump campaign spokesperson said the choice of the shirt did not correspond to the "grab them by the pussy" comment heard on the 2005 hot mic tape, many thought Melania wore the shirt to signify her support of her husband despite the comments he made made shortly after they were married.

Most recently Melania reacted to a piece written by former People magazine writer Natasha Stoynoff, who alleged Trump pinned her up against a wall in 2005 and forcibly kissed her while Melania, who was pregnant at the time, was upstairs. A Trump spokeswoman vehemently denied Stoynoff's claims, responding, "This never happened. There is no merit or veracity to this fabricated story.”

In her piece, Stoynoff provides the details of an alleged conversation between she and Melania, which Melania has claimed is "false and completely fictionalized." For this reason, Melania demanded a retraction of the People story.

There has also been some speculation as to whether Trump himself will appear at the Oct. 19 debate in light of the recent allegations against him — all of which he has vehemently denied. However, Trump has repeatedly said he is not a quitter and will stay in the race until the end of the election season. Naturally, this also suggests that he will also appear at the third debate.