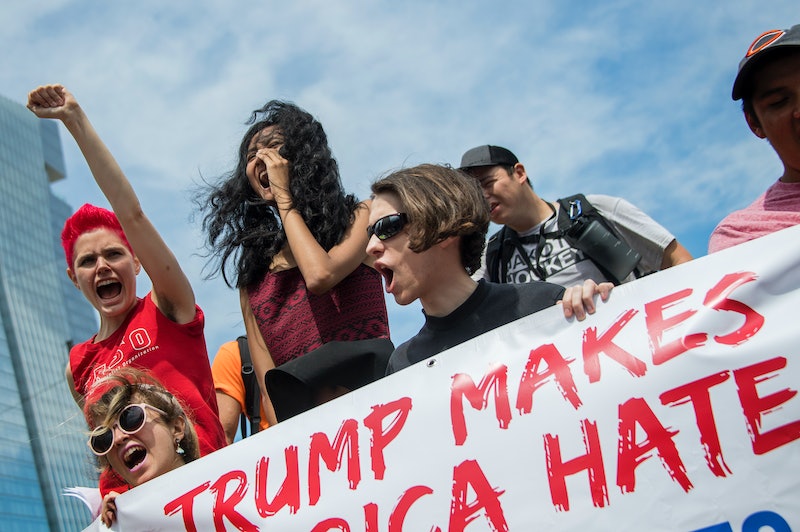 As the world reels from the growing pile of sexual assault allegations against Republican presidential nominee Donald Trump — all of which he has denied — some people are taking their frustrations over how the accusers are treated to Twitter. Many sexual assault victims face unnecessary questions as to why they didn't report the attacks sooner or, in some cases, why they didn't report them at all. In response to that frustrating question, people have begun using a trending hashtag to tell their stories and share their impressions. These tweets show the power of the "Why Women Don't Report" hashtag, and prove that rape culture's pervasiveness is much deeper than you might think.

There are lots and lots of reasons that someone might choose not to report being sexually assaulted — almost as many reasons as there are sexual assaults and rapes. When I was assaulted around this time in 2014, I didn't report it because I was somewhat inebriated and had, initially, entered the situation consensually. Others don't report because, like the women who have come forward with allegations that Trump sexually assaulted them, the alleged assaulter is rich, famous, or powerful. The bottom line in all of these scenarios is that we are scared we won't be believed, because so many people before us weren't.

Below are some of the most powerful tweets that used the "Why Women Don't Report" hashtag. They show why this kind of campaign is important, and why we must overhaul our system and finally begin attaining justice for survivors like me, my mom, my grandmother, most of my friends, and the millions and millions of other people who've lived through rape and sexual assault without those who hurt them ever seeing a day in court.

1. Because The Numbers Aren't In Our Favor

Rape Culture 101 is based on these staggering statistics. These odds show, unfortunately, just how fruitless reporting rape and assault can be.

2. Because No Explanation Will Ever Suffice

The understanding between survivors can be life-saving... and the willful ignorance of those who refuse to believe is heartbreaking.

3. Because Their Gender Identities May Come Into Question

Sixty-four percent of transgender people have been raped, and as these tweets shows, there are even more barriers for trans women to report their assaults.

4. Because Reporting Itself Can Be Traumatizing

Many survivors who do report sexual assault and rape say police interrogate them and ask invasive questions that seem to call into question whether or not they "deserved" it.

5. Because Of Who The Perpetrator Is

As many as nine out of 10 perpetrators in reported child sexual abuse cases are people whom the victim knows, and 22 percent of reported rapes were committed by partners, 47 percent by acquaintances, and 2 percent by relatives. While there's no way of knowing how many unreported cases involved perpetrators who were close to the survivors, it's safe to assume that this is an overall trend.

6. Because There's A Perverse Sense Of Community In Being A Survivor

As helpful as it can be to know that so many other people have had similar horrifying experiences, it's also tragic and frightening to realize how widespread the problem is.

7. Because Of The Potential Backlash

Last year, a woman named Allison Dow accused a Mike Bell, a Toledo, Ohio, mayoral candidate of sexual assault. In response, Bell denied all allegations and claimed to never have met her. She was then harassed online, while the candidate received no censure. This is one of countless stories about the way people mistreat those who choose to speak out.

8. Because They Are Ashamed

One of the most unfortunate and prevalent feelings following rape, sexual assault, and sexual abuse is shame. When someone takes advantage of and violates you, it feels incredibly shameful, even if you know it wasn't your fault — much less if you're led to believe it was.

There are countless reasons why people don't report their sexual assaults. We have finally reached a cultural moment where we can discuss our traumas openly, and hopefully, we will be able to report it more easily when it happens — and one day, can put an end to rape, assault, and abuse for good.