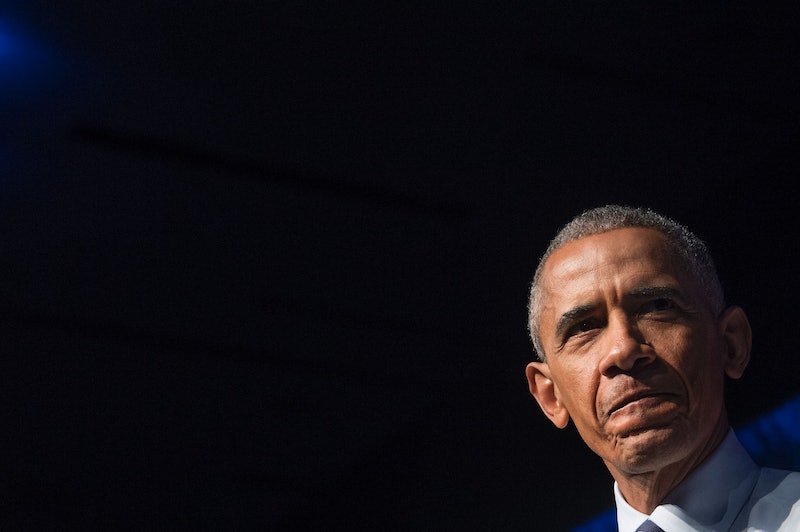 The president is back on the campaign trail, and he's not holding back. In Barack Obama's latest speech on Donald Trump, he called out the Republican Party for creating an environment where a candidate like Trump could thrive. In their refusal to stand up to baseless insults levied his way, he said, they allowed a candidate whose campaign has been so heavily based on lies to rise to power within the party.

"The people who knew better didn't say anything. ... They stood by while this happened," Obama said at a speech in Columbus, Ohio. He also used this line of attack on Tuesday, noting that they let it slide when, for example, Trump fed the fire of "Birtherism," and when radio hosts called Obama the antichrist. The Republican Party behaved this way in an effort to gain votes, he argued, and that brought those kind of arguments into the mainstream. Now, as many Republicans try to distance themselves from Trump, Obama isn't letting them get away so easily.

In particular, Obama denounced Ohio Senator Rob Portman for standing by Trump through numerous other insults to myriad groups, and only trying to get away now after the video of Trump's comments bragging about sexual assault surfaced. "You don't get points for that," he said.

Currently, Portman is apparently supporting Mike Pence, along with a number of other prominent Republicans now behind the vice presidential nominee. To Obama and, let's be real, most Democrats, this is too little, too late for members of the party that "[has] been feeding their base all kinds of crazy for years."

As Obama enters the final 100 days of his presidency, looking back on the election season that launched him into office provides a fascinating window into how the political climate has changed. John McCain, Obama's opponent back in 2008, proved himself to be the polar opposite of the man Obama is currently trying to campaign against when he was forced to respond to a woman claiming that she couldn't trust Obama. McCain denied her claim that Obama was an Arab, and moved on to defend him as a "decent family man" with whom he simply differed on policy.

Oh, how things have changed. McCain is now among those who backed Trump before the explicit video emerged, and then withdrew their support in response to it, even though Trump insulted McCain's war record early on in his campaign. As McCain is now running for reelection in Arizona, Obama's words are directed exactly his way. Thanks to Trump and his toxic effect on the party as a whole, Republican Senate seats are becoming less secure across the board — and with this latest speech in Columbus, Obama was trying to flip another seat into his party's camp.