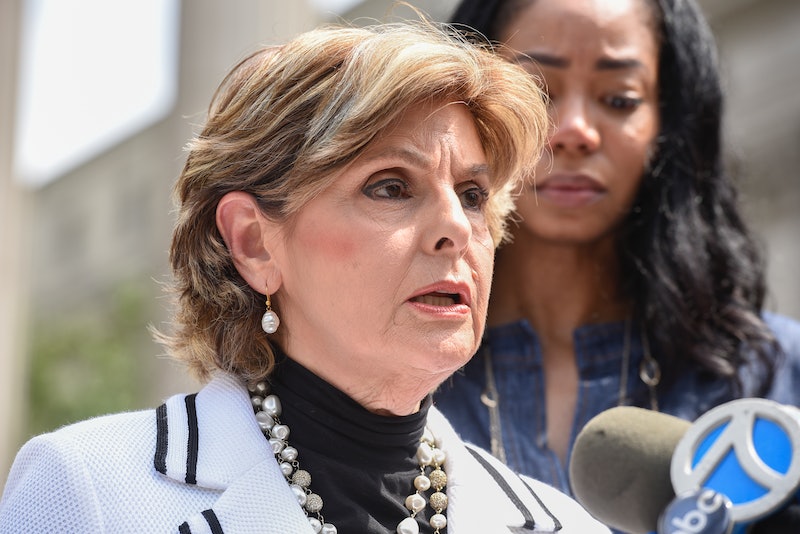 It has been exactly a week since Donald Trump's Access Hollywood hot mic tape was uncovered, revealing the Republican presidential candidate boasting about kissing and grabbing women without their consent. Since then, multiple women have come forward with allegations that Trump sexually assaulted them or touched them inappropriately. On Friday, attorney Gloria Allred presented a new Trump accuser, Summer Zervos, who was a candidate on The Apprentice in Season 5. Update: Summer Zervos, one of the 15 women who accused Donald Trump of sexual misconduct, is suing Trump for defamation. “All of these liars will be sued after the election is over,” Trump said at an October 2016 rally in response to Zervos and the others who alleged he sexually assaulted them. Trump also issued a statement in October denying Zervos' allegations and saying that he never met her at a hotel, nor did he greet her "inappropriately."

Earlier: During the press conference, Allred said Trump kissed Zervos, touched her breast, and "led her into his bedroom." Zervos said Trump invited her to meet him at the Beverly Hills Hotel, which she believed was for a business dinner. Instead, Zervos said that when she arrived, she was "taken to a bungalow."

"I was standing in an entryway," Zervos said. "To the left was a bedroom and his clothes were on the bed."

Zervos said Trump asked her to lie down on the bed, and he "began thrusting his genitals." Zervos said she made it clear to Trump she was turning down his sexual advances, and he did eventual turn to discussing business matters, encouraging her to default on her mortgage. He then told her to show up to his golf course the next morning.

"I wondered if the sexual behavior was some kind of test and if I had passed," Zervos said.

Before Zervos spoke, Allred said, "Donald, before you can become president of the United States, you must first learn how to treat women with respect." The famous attorney, who has represented a number of high-profile clients, including the family of Nicole Brown Simpson, also said, "The White House is not a locker room."

Near the end of the press conference, Zervos addressed Trump directly, saying, "You do not have the right to treat women as sexual objects just because you are a star."