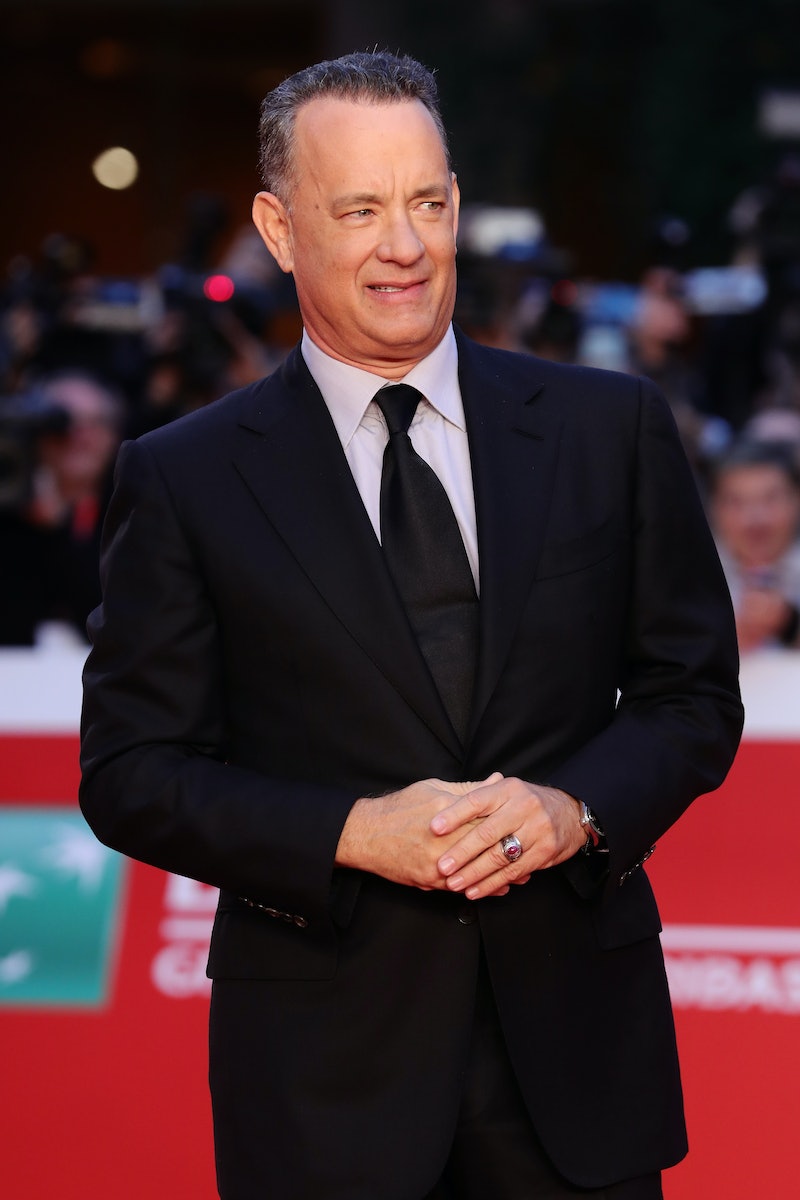 After months of making misogynistic comments, the release of Donald Trump's 2005 conversation with Billy Bush provided hard evidence of what many of us already knew — Trump thinks sexual assault is something to brag and laugh about. His forced, half-hearted apology was far too little, too late and he chalked it up to nothing more than "locker room talk," with the strong implication that all men think and speak this way. (They don't.) Then, he repeatedly refused to answer Anderson Cooper's straightforward question at the Oct. 9 presidential debate: "You bragged that you have sexually assaulted women. Do you understand that?” Unsurprisingly, many celebrities have weighed in about Trump's disgusting comments — but Tom Hanks' response to the Trump tapes made an important point that is far too often overlooked.

During an interview to promote his latest movie, Inferno, Hanks had this to say about Trump's comments — and his genuine anger is clear in the video clip:

Hanks' comments send an important message that is far too often overlooked when men address sexual assault — women are more than daughters, sisters, and wives. Every single one of us has an identity that is not tied to the men in our lives. To be clear, I appreciate when any man stands up to misogyny and rape culture. I'm aware that they don't mean to demean us as women or imply that our own identities are unimportant. I understand that when you're addressing an issue that you haven't personally experienced, it's natural to tap into your emotions by imagining how you'd feel if a girl or woman you love was the victim of sexual assault.

Hanks is one of Hollywood's most beloved actors for many reasons, one of which is that he's a devoted family man and, from everything we know, an amazing husband and father. And that makes it even more important that he made clear Trump's comments didn't simply infuriate him because he knows that, like every other woman in the world, his wife and daughter could be affected.

The actor's brief comments speak volumes — women must be seen as our own entities, period. Men should be offended by Trump's words, not because they're husbands and fathers, but because they're decent human beings who believe women deserve to be treated with dignity and respect. It's also important for men to make clear that, despite what Trump and his supporters want us to believe, people like Trump do not represent all men's attitudes towards women and it's dangerous to imply that they do. These recent tapes have been triggering to many sexual assault survivors, and made us question if this truly is how all men behave in private.

To be fair, Hanks is far from the only male celebrity who has expressed many of these sentiments in response to the Trump tapes. But, thus far, he is the only man who has made it abundantly clear that his outrage doesn't stem from his love for his wife and daughter. (Although plenty of these men have condemned Trump's comments without referencing their family members.) The fact that so many men phrase their responses in terms of the women in their lives has been a source of frustration for many of us:

Tom Hanks is a well-liked and respected celebrity who people listen to — I truly hope they're listening now and reflecting on his comments about Trump and sexual assault. Every celebrity has a platform to make their views known to the world — and Hanks deserves major credit for calling out that women deserve to be valued as humans, not just wives and daughters.