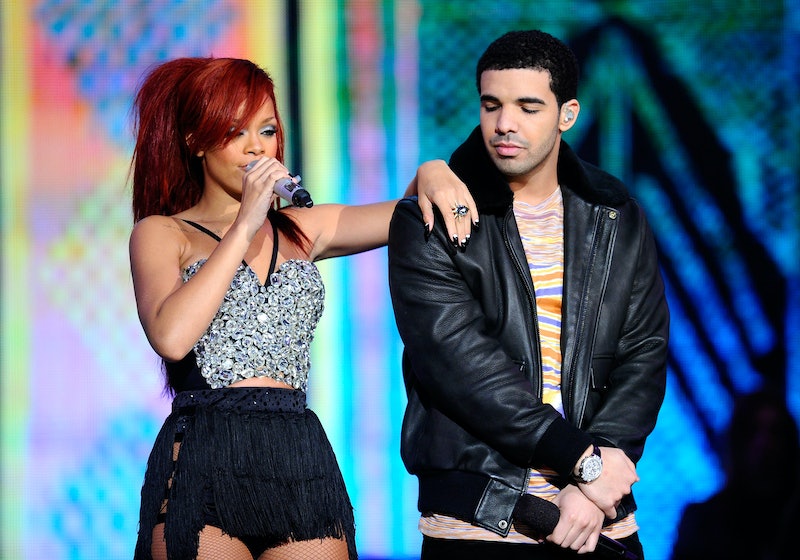 Just when it seemed like Drake and Rihanna could finally be sailing smoothly into their dancehall future, rumors are swirling that the pair have split up. After a summer of love filled with their most public displays of affection (which followed seven years of "are they or aren't they") sources told E! News that Drake and Rihanna "are seeing other people." Hearts are broken, and not just Drake's. Mine is one of them, but as much as I love Aubrih, they've been toying with the world too long, and I just can't take it anymore. And this time the writing was on the wall, we just chose not to see it.

But now it's time to take a good, hard look at how fans could have prepared for the worst, because no one is going to take care of you the next time Drake and Rihanna split (because, inevitably, there will be a next time).

It's worth it to note that a different source told People that Drake and Rihanna are just in an open relationship and seeing other people, but I am choosing to be dramatic and declaring that, regardless of that, their long-lasting love will never stand a chance. Here are the signs you may have missed:

Have you ever heard a more passive-aggressive song than "Too Good" by Drake featuring Rihanna? It's a great track, but the lyrics are shady on both ends, and clearly show a disconnect in their relationship. Who's too good for who? They both are, apparently.

Drake's Got It Bad, But Not The Other Way Around

It's clear that sensitive Aubrey Graham has always loved Rihanna more than she him — or at least that he was willing to 'fess up to it more often, whereas she usually maintained that they're just good friends. Besides his declaration of love on the VMAs stage, he's long talked about being heartbroken by Robyn Fenty. All the way back in 2010, Drake told the New York Times that he was shattered by Rihanna, saying that he "felt like a pawn." Sorry, bub, it's Rihanna's world and we're all just living in it. I would be blessed to be Rihanna's pawn.

Obviously, this was the reddest of flags. Drake, what have you done?! And Rihanna, you could never be the problem.

They're Both Busy AF

Usually, when the reason given for a celeb split is that their schedules are too full, it seems like bull, but in Riri and Drizzy's case, it's the subjective truth. Drake is constantly on tour, and Rihanna has her fashion line that's blowing up; she just showed at Paris Fashion Week at the end of September. Not to mention her burgeoning career as a movie star: Riri is reportedly part of Oceans 8, a spinoff of the classic franchise starring all women, reportedly including Mindy Kaling and Sandra Bullock.

She Curved Him At The VMAs

Drake laid it all out on the stage at the VMAs during his speech presenting Riri with the Video Vanguard Award, and she met his affection with... a curve. Drake went in for the kiss and Rihanna gave him her cheek instead. :( As much as I wanted Aubrih to make it, this seemed like a prescient sign of the fallout to come.

OK, maybe not always, but it seems like it was a bad omen. If you're declaring your "forever love" in permanent, shark-shaped ink on your body, it's probably not going to last very long. Remember Winona Forever?

Worry not, fellow shippers of this union: Drake and Rihanna have been an on-again, off-again enigma for almost a decade now. Throughout all their hanging out and professions of love and respect and friendship and sexy music videos, it seems like they just can't stay away from each other, and then when they get together, can't seem to make that work either. It's complicated! But as spring follows winter, the story usually goes that Rihanna and Drake will get together again, some time. We just have to be patient.

And then be sad again.

More like this
Adele Says It Would Be “Wonderful” To Have Kids With Boyfriend Rich Paul
By Jake Viswanath
Who Is Betty Who Dating? The Australian Singer Is Married To Her Tour Photographer
By Radhika Menon
Britney Spears’ Honeymoon Plans Include Watching This Movie With Her Husband
By Grace Wehniainen
Rihanna Is America's Youngest Self-Made Woman Billionaire, According To 'Forbes'
By Hugh McIntyre
Get Even More From Bustle — Sign Up For The Newsletter