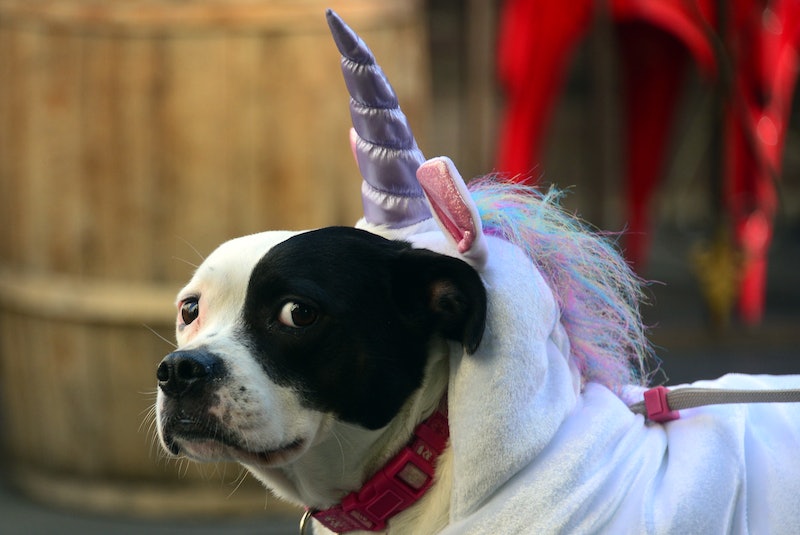 If you've ever wondered whether unicorns actually existed, this is not a drill: Scientists have discovered unicorn fossils. And not just any old fossils, either; unicorn skull fossils. I know, I know: Is My Little Pony real? Was The Last Unicorn a biopic? Well... not quite. While we generally think about unicorns as mythical creatures that appear only in fairy tales, they are an actual breed that has long been extinct — although they also probably didn't look the way you think they did.

Hitherto, previous research has led us to believe that what we're colloquially calling unicorns here — Elasmotherium sibiricum — went extinct 350,000 years ago. According to these new fossils, however, the rhino-esque creatures (yep, they were rhinos, not horses) date back only 29,000 years. To the average human, that's still basically forever ago; however, it's way closer to us in time than we thought.

The current research, which was published in the American Journal of Applied Sciences, explains that unicorns were likely about 6 feet tall, weighed 8,000 pounds, and measured about 15 feet in length. (That's a really big rhino.) Tomsk State University scientist Andrei Shpanksy explained in the paper that the newly-discovered fossils were found in the Pavlodar region of Kazakhstan, which actually makes a certain amount of sense: Said Shpanksy, "Most likely, the south of Western Siberia was a [refuge], where this rhino had preserved the longest in comparison with the rest of the range."

Of course, these unicorns are pretty different from the kind we often see depicted in cartoons, plush toys, and so on. The research is still out on whether or not these massive creatures could fly — though I'm pretty sure we can safely assume that's a "no" — and we have no evidence that they sparkled or had wings, either. I know, I know: All of our favorite Lisa Frank unicorn stickers and folders are a little misleading, but hey, science never sleeps. Who knows what new information and discoveries researchers will make in the coming years? Maybe the unicorns of our youth really did exist, in fluorescent pink glitter and all. A '90s kid can always hope.