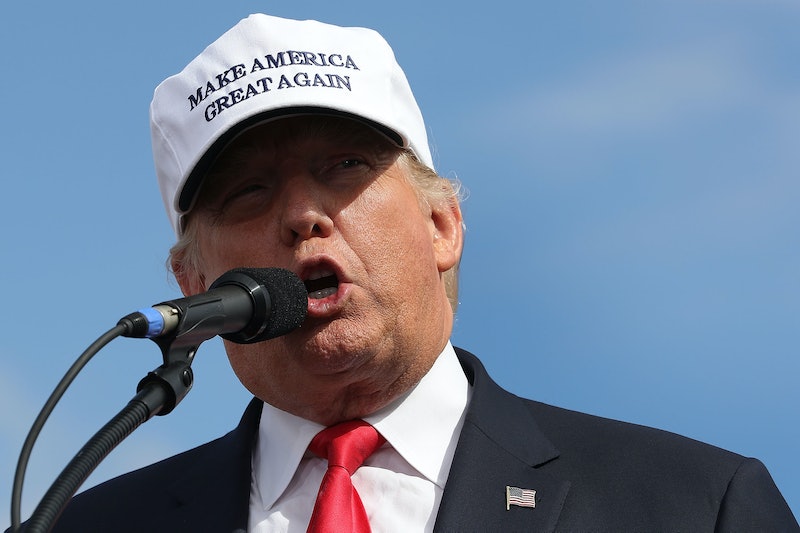 For days, Republican presidential nominee Donald Trump has been engulfed in a slew of sexual assault allegations, accusing him of the same kind of groping, violating behavior Trump himself described in the recently released, politically devastating Access Hollywood video from 2005. Trump has already denied the allegations in the most strident terms possible, even implying that one of his accusers is not attractive enough for him to want to assault her. And now it's clear that's his strategy going forward. Trump is relying on extreme public shaming to deny his sexual assault allegations and silence his accusers, and it provided one of the most horrifying scenes of his entire campaign.

For the record, multiple women have come forward in the past few days to accuse Trump of groping and kissing them without consent. One of them is Natasha Stoynoff, a writer for People who has gone public with her story of Trump kissing her against her will at his Florida estate, Mar-a-Lago, while she was writing a profile of the real estate mogul in 2005.

Trump denies this, as his comments about Stoynoff at his rally in Greensboro, North Carolina, made very clear. It needs to be noted, however, just how harrowing this is. As Michelle Obama said yesterday, with great moral force: "This is not normal."

Trump literally encouraged his supporters to check out Stoynoff's Facebook page: "That's right, she's liar. She is a liar. She's writing a story ― check out her Facebook page, you'll understand."

What you see in the video above (starting at about the 14-minute mark) is a major party presidential candidate, less than a month from the election, taking to a rally to specifically direct his supporters to the Facebook page of a sexual assault accuser.

And not just any candidate at any moment in political history ― the one who's notable for his volume and number of virulent, wildly racist and misogynist online followers. By directing his followers to "check out" Stoynoff's Facebook, in addition to his assertions that she's a liar and not attractive enough to be assaulted, Trump has all but assured that she'll be deluged in online hatred and abuse. There's a reason so many people have likened the character of Trump's online support to the Gamergate online harassment movement.

But then, after urging his supporters toward Stoynoff's social media accounts, he went a dangerous step further. Speaking about Jessica Leeds, who told The New York Times that Trump groped her during a flight back in the early 1980s, Trump said the following: "Believe me, she would not be my first choice, that I can tell you. You don't know, that would not be my first choice."

To be clear, Trump had already implied that his accusers weren't attractive enough for him to want to force himself on them ― he did so at his West Palm Beach rally on Thursday, the morning after the allegations began to surface ― a notion that feeds caustic and damaging stereotypes about sexual assault. But what he did at the Greensboro rally was an even starker, more awful moment, the sort of thing that should make every decent person's skin crawl: Trump made the point openly, making it into a joke in front of the entire country.

In just a few seconds, Trump showed all of America exactly what he thinks of women, and how big a joke this all is to him. And let's not forget about the people attending the rally ― they laughed when Trump made these heinous comments.

It's the exact kind of moment that serves as a trigger for millions of survivors of sexual assault across the United States, and it's incumbent upon society to recognize and hear the pain, and denounce the cruelty. Whatever happens over the few weeks left in this presidential campaign, one thing is becoming terribly clear: It's going to be important to pay special attention to your own mental health, and self-care, because the world of politics is quickly growing indistinguishable from the world of abuse.