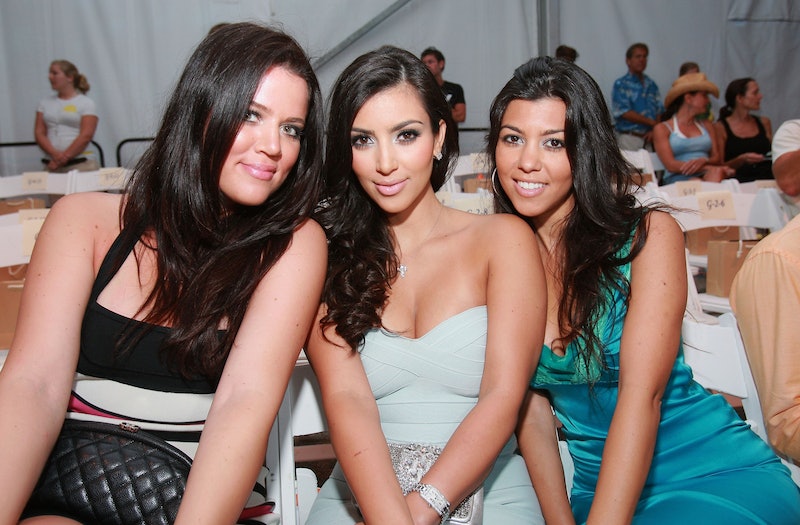 There are some things worth celebrating, and then there are some things worth kelebrating: Nine years ago today, a show about a family from Calabasas debuted on the small screen. On Oct. 14, 2007, E! aired the very first episode of an unscripted program called Keeping Up With the Kardashians, and 11 seasons (and several spinoffs later), it's established itself as one of the best reality shows of the era. In honor of KUWTK 's ninth birthday, I thought I’d go ahead and give a shoutout to one of the unsung heroes of the series: the original Keeping Up With the Kardashians title sequence.

Looking at KUWTK’s first intro (and the entire first season, for that matter) in 2016 is sort of like re-watching Johnny Bananas on The Real World: Key West or Vicki Gunvalson on the first season of The Real Housewives of Orange County; a decade's worth of reality television moments flood your memory as you ask yourself, Was that less than ten years ago, or a lifetime ago? It is a trip.

As the show's plucky theme whistles its way though the title sequence, the Kardashian-Jenners stand in front of a city skyline backdrop. A sea of sequins and animal prints, the family poses and pushes and postures while camera bulbs flash. Eyes roll, snarky comments fly, and the song keeps on whistling.

But like the cozy cottage home decor and the Juicy tracksuits that were as much a part of the show’s early episodes as the Chipotle purse fight, the original title sequence was eventually cast aside. Now KUWTK begins with a slick and sleek intro that matches the Kardashian-Jenner brood’s kurrent aesthetic; when the Kardashian-Jenner’s brand khanges, the flagship series puts on a chic pantsuit and follows suit. As the cast grows up, the title sequence grows with it.

Nine years ago, long before their empire came to power, the Kardashian-Jenners were a semi-famous family with a new television program. And this is how their reality TV reign began:

May we kherish it always.