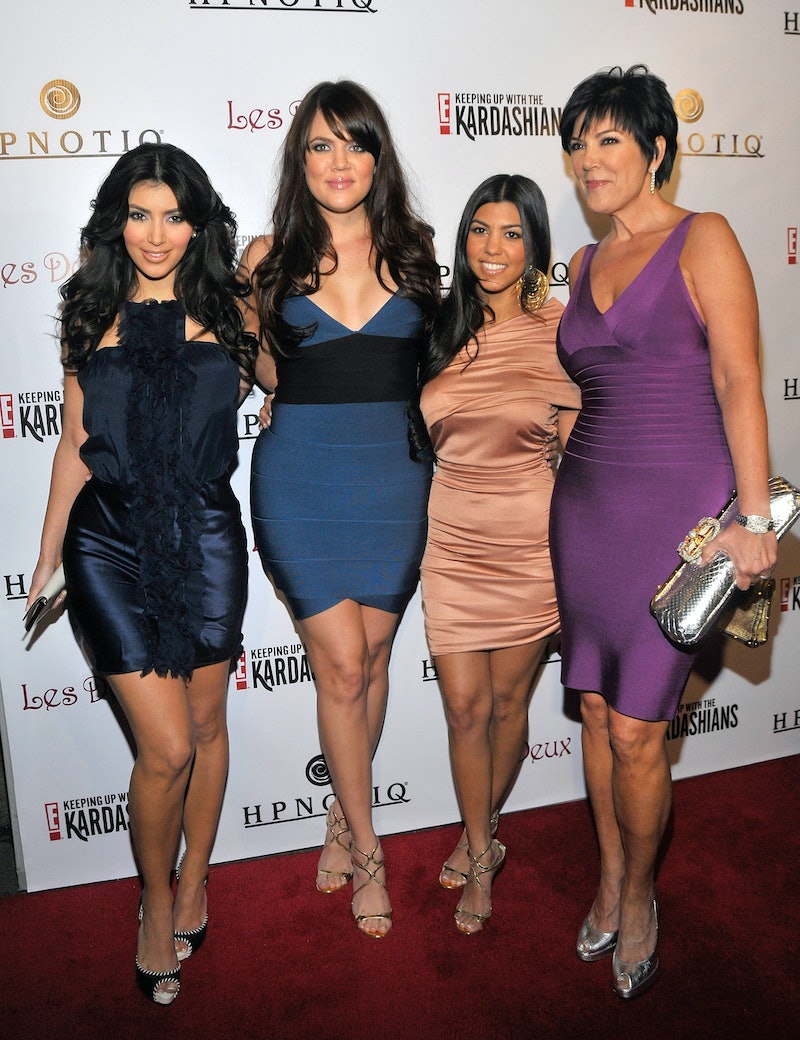 Let's take a quick trip back in time: The year was 2007 and a new show premiered on E! called Keeping Up With The Kardashians . It chronicled the daily life of a big family, almost like a modern-day version of The Brady Bunch (except, you know, way less wholesome). At the time, the name Kim Kardashian was vaguely familiar. Maybe you recognized her as that brunette sidekick that had been spotted hanging out with Paris Hilton, but besides that, she was virtually unknown, save for a scandal or two. Fast forward to 2015 and it's practically impossible to go a day without hearing about Kardashian, her daughter North West, or her four sisters — Kourtney, Khloe, Kendall, and Kylie. On Sunday night, Season 11 of Keeping Up With The Kardashians premieres, and to celebrate the occasion, Kim K. shared a major throwback.

On her social media accounts, Kim Kardashian posted KUWTK's Season 1 promotional photo and it will make you feel incredibly nostalgic. Just a glimpse at the picture and it's clear that a ton has changed in the eight years since the show first went on the air. I honestly can't believe there have been so many seasons! Not to mention countless spin-offs, like Kourtney and Kim Take New York or Kourtney and Khloe Take The Hamptons.

Kendall's gasping expression perfectly sums up my reaction of disbelief. Now let's compare it to the Season 11 promo.

Kim Kardashian says it best in her tweet: "A lot has changed lol." She's right, but exactly how much has changed? Here are 11 differences between the two photos, in honor of KUWTK 's Season 11 premiere.

Do you see all of those spots? It looks like they've swapped the cheetah print for all-black ensembles. Much more chic, I'd say.

Instead of whispering or gasping, this year's promo has the stars all look way more serious. No smiles and no nonsense. It definitely conveys a stronger sense of confidence.

North West and the Disick kids weren't even born back in Season 1. Overall, the family has grown quite a bit since the show premiered — not to mention Kimye's new baby that's on the way.

I miss Rob Kardashian! Sadly, he hasn't been on the show in ages. He's not even in this year's promo image.

The biggest change between the image may be looking at just how much Kendall and Kylie have grown up. Back then, they were goofy kids, and now they're two of the most influential teens around.

6. Kim Was The Center Of Attention

Even the old promo image proves that the show really was all about Kim Kardashian. Now she and her sisters share the spotlight pretty equally.

7. Kris Was Still Married To Caitlyn

During Season 1, Kris Jenner was still married to Caitlyn Jenner, and it was before the Olympian's public transition. They may no longer be together, but the good news is that Kris and Caitlyn are still part of one another's lives.

8. Kanye Wasn't Even In The Picture

Nowadays, Kanye is constantly by Kim's side. But back then, Kim Kardashian was dating Reggie Bush. Remember that?

OK, so a font change may not seem like a big deal, but it's matured along with the show itself. It's definitely become more sleek.

10. Khloe Was A Brunette

Khloe Kardashian is constantly changing up her look, but back in 2007, she was a brunette, along with the rest of her sisters.

11. There Was The Cheesiest Background

Fake palm trees? Really?! The old promotional image is a bit campy, while the new one is way more mature.

It feels like the Kardashian family has grown up right before fans' eyes! And now I'm even more excited to watch the new season.