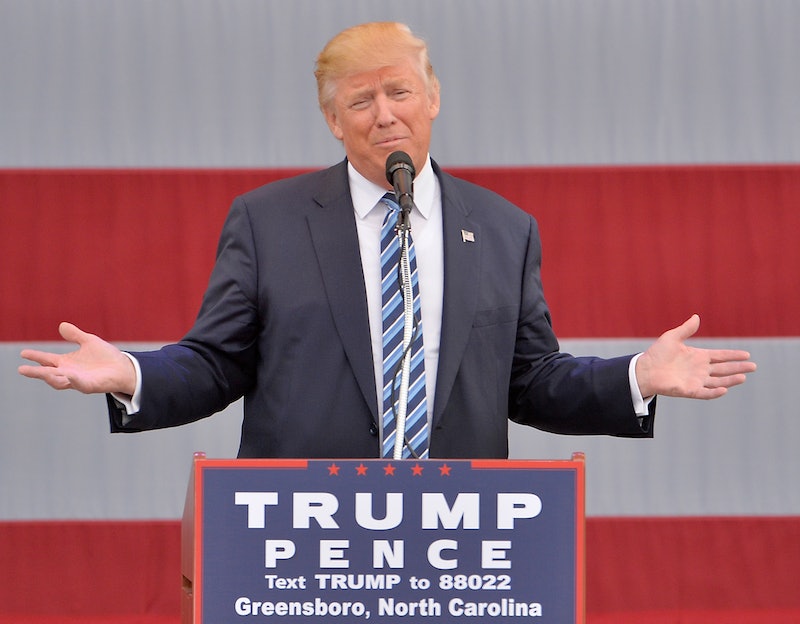 In response to the growing avalanche of women accusing him of sexual assault, Donald Trump has adopted the strange, offensive, and counterproductive strategy of implying that actually, the women in question aren't attractive enough for him to bother sexually assaulting. It's a terrible response, both morally and tactically, but the Republican standard bearer is nonetheless committed to it, and on Friday, Trump suggested that Hillary Clinton's ass isn't that nice, because hey, why not? If you've determined, as Trump seemingly has, that insulting women's appearances is the best way to win an election, you might as well go all in on that awful, awful strategy.

Earlier, Trump said that Jessica Leeds, who accused him of reaching up her skirt uninvited during a flight several decades ago, "would not be my first choice." In response to allegations made by Natasha Stoynoff, a reporter for People, who said that Trump forced his tongue down her throat during an interview, the GOP presidential nominee asked supporters to "look at her." More generally, he's referred to his accusers as "horrible, horrible liars."

Where to begin with this? For one, there's never a good reason for a presidential candidate, regardless of the circumstances, to publicly insult somebody else's appearance, including that of their opponent. Moreover, "she wasn't cute enough" is in no way a valid response to being accused of sexual assault, in part because it inadvertently implies that the accused would sexually assault a woman if they found her attractive enough. Third, Trump is being flatly hypocritical — days ago, he begged voters to believe the claims of the women who've accused Bill Clinton of sexual misconduct, and his beleaguered campaign manager did the same. Lastly, his reference to Clinton's body is an attempt to reduce her solely to her physicality which, in addition to being sexist, does nothing but confirm the existing negative perception that Trump sees women as objects.

Trump has never had good favorability ratings with female voters, and since the tape of him bragging about sexual assault was published, women have turned on him in even greater numbers. Nate Silver of FiveThirtyEight noted on Thursday that "if Trump loses the election, it will be because women voted against him," and it's looking more and more as if that is indeed what will happen. That Trump thinks it's a smart idea to insult Clinton's body is only the latest in a series of truly baffling decisions by a man who, barring anything extraordinary, is headed towards a spectacular defeat in November.

More like this
Iran Has Issued A Death Sentence Over Mahsa Amini Protests
By Catharina Cheung, Darshita Goyal and Maxine Harrison
Twitter Can’t Get Over The One Thing Missing From 'GBBO's Tense Finale
By Darshita Goyal
Amanda Gorman Shared A Powerful Message On Meghan Markle’s Penultimate Podcast
By Darshita Goyal
Claire Foy & Rooney Mara Revisit A Devastating Tale In 'Women Talking'
By Bustle UK
Get Even More From Bustle — Sign Up For The Newsletter