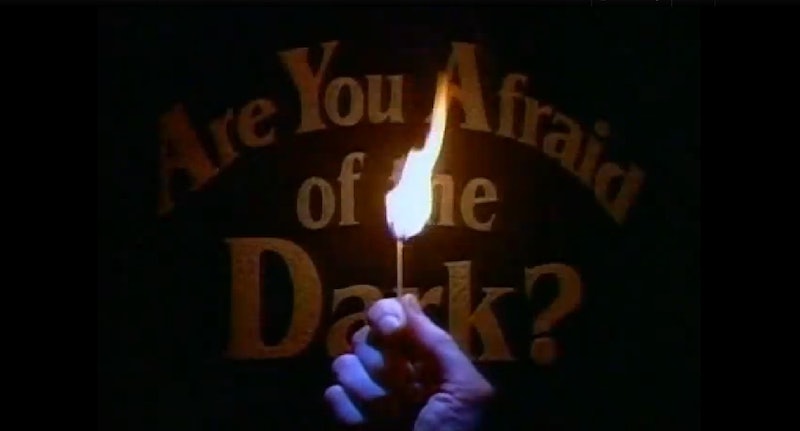 Nothing brings me back to my childhood quite like a good ghost story told around a crackling campfire. While I never got to form my own Midnight Society — it turns out, real life parents aren't OK with their children wandering off alone into the woods — growing up in the '90s, nothing fed my obsession for horror stories like Are You Afraid of the Dark? did. Now that Halloween is almost here, I'm thinking it's time venture back into the forest with the Midnight Society and revisit some of the best tales the show had to offer.

Like The Twilight Zone before it, Are You Afraid of the Dark? is infinitely rewatchable. No matter how old you get, "The Tale of the Ghastly Grinner" is still going to give you chills. The show holds up, especially if you plan a marathon for a stormy, autumn evening when you can snuggle under a blanket and allow yourself to be transported back in time to your SNICK days.

Allow me to submit for your approval 23 episodes of Are You Afraid of the Dark? you should watch this Halloween. I promise, each one is every bit as scary as you remember, and still bound to leave you checking under your bed for monsters in the middle of the night.

Melissa Joan Hart guest stars in an episode that sticks close to traditional ghost story tropes, and is all the creepier for it. A little boy whispering "I'm cold" never felt so frightening.

2. "The Tale Of The Ghastly Grinner"

Admit it, the sound of the manic laughter the Ghastly Grinner inflicted on his victims still haunts you to this day.

If you have a fear of mirrors, blame this episode and its ghostly look at a child trapped just on the other side of the glass, begging for help by writing on the walls.

The title for most visually horrifying creature to ever show up on Are You Afraid of the Dark? goes to the pool corpse who terrorized poor young Jay Baruchel. While this was a case of a monster looking more frightening than it actually was, seeing the rotting corpse rise out of the pool is still an unsettling image.

5. "The Tale Of Laughing In The Dark"

Zeebo the clown is the purest form of nightmare fuel out there.

6. "The Tale Of The Midnight Madness"

This is the rare episode that has improved with time. Now that you know who Nosferatu is, seeing him escape from the screen will be a far more frightening experience.

7. "The Tale Of The Dollmaker"

Dolls are scary enough without you having to fear being turned into one, but that is exactly where this episode goes — with a bonus detachable hand scene.

9. "The Tale Of The Crimson Clown"

Yes, another clown episode. I apologize to anyone who suffers from clown fear, but nothing says Halloween quite like a demonic clown doll.

Having your own personal scarecrow servant is all fun and games until you accidentally order it to murder someone.

You cannot have an Are You Afraid of the Dark? marathon without watching the famed Ryan Gosling episode. Not only does it have a young Gosling, it also features an unnerving story about a young boy's preoccupation with death.

Tia and Tamera Mowry will give you serious '90s throwback feelings in this episode that allowed the Sister, Sister team to indulge in a dark story about a nefarious, life-stealing chameleon.

The show's Canadian pilot is a Halloween special and an homage to the classic short story "The Monkey's Paw." The first official tale of the Midnight Society is well worth revisiting, especially during this time of year.

If you need a reminder to stay out of the basement, check out this spooky story complete with eerie music.

A young girl's wish to live in a fairy tale world acts as a reminder to the audience that fairy tales are usually nightmares in disguise.

The final season did not offer up as many lasting scares as the other seasons, but the tale of a woman who steals the faces of young models is worthy of a rewatch.

Alien episodes are generally not as much fun as ones dealing with the supernatural. However, the premise behind "The Tale of the Closet Keepers" elevates the entire episode. Two kids get dropped into a human zoo, and the fact that one of the kids is deaf ends up saving the day, making the story one where a child with a disability gets to be the hero.

Is there anything scarier than the idea that if you go to sleep a quartet of ghosts will come after you? I didn't think so.

I cannot resist the lure of a completely bizarre premise. In an era where prank phone calls are not really a thing anymore, "The Tale of the Phone Police" is a strange artifact of its time.

It's all about the twist in this often overlooked ghost story.

Yes, this episode is spooky, but it is also one of the show's most poignant outings.

A truly devious villain gives "The Tale of the Captured Souls" an extra punch of creepiness.

The show's American debut is not as haunting as some of the episodes that would follow, but it still set the stage for the horror mastery to come.

Indulge your inner '90s kid this Halloween, and join the Midnight Society around the campfire one more time. Just don't expect to get much sleep after your Are You Afraid of the Dark? marathon.

More like this
The First Trailer For 'That '90s Show' Includes So Many Nods To The Original Series
By Jack Irvin, Alyssa Lapid and Grace Wehniainen
David Tennant’s Transformation In ITV’s 'Litvinenko' Is Astonishing
By Sophie McEvoy
These 'Criminal Minds' Throwback Photos Show The Cast’s 17-Year Evolution
By Grace Wehniainen
'Gilmore Girls’ Lauren Graham Just Revived Our Hopes For A New Reunion
By El Hunt
Get Even More From Bustle — Sign Up For The Newsletter