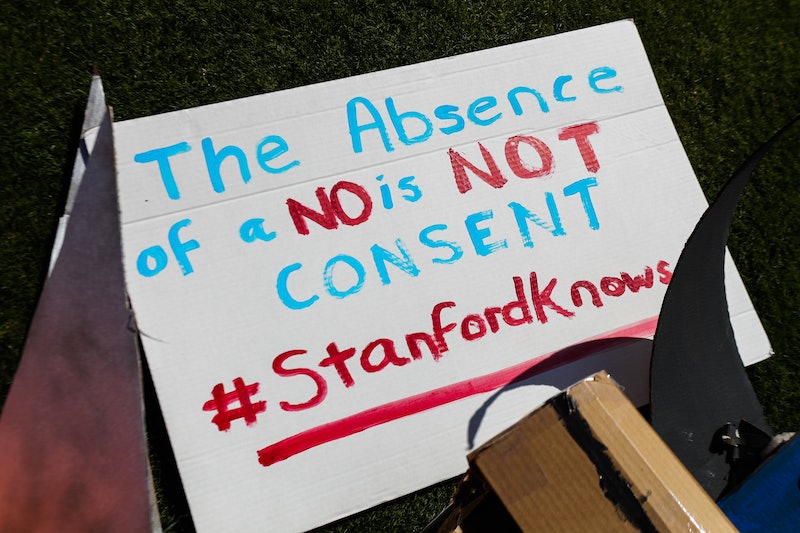 If you’re a woman who’s starting to feel like the all the jaw dropping and face palming just won’t ever end, you’re not alone — from the continued Bill Cosby sexual assault accusations, to the rape case of former Stanford University swimmer Brock Turner, to the recent reversal of Chesterfield FC football player Ched Evans’s rape conviction, to the latest Donald Trump implosion heard ‘round the world, 2016 has been a year filled with one headline after another reminding us that sexual assault, rape culture, and victim blaming are hardly things of the past. Which is precisely why graphic memoir Becoming Unbecoming is a must-read.

As a woman — as a human — all this has probably left you feeling frustrated, afraid, furious, all-out exhausted, and unsure where to direct your energies. But consider starting with Becoming Unbecoming , a new graphic memoir by author Una that explores all of these issues by taking a hard, impassioned look at sexual violence, the practice of victim shaming and blaming, a global culture where male violence repeatedly goes unpunished, and the ways in which women’s bodies and minds have been systemically diminished, disregarded, and silenced by criminal justice systems all over the world. Phew. It's a lot, but Una takes it all on.

From the first page, Becoming Unbecoming is a feminist call to action. Una, a sexual assault survivor herself — although she’s wary of the term “survivor,” asking what the use of such a term suggests about the women who do not, in fact, survive their own assaults — just gets it, using Becoming Unbecoming as a space to navigate the shame-filled messaging of her childhood, to work out her own experience of gender violence and assault, and to finally rally against the stigmas, stereotypes, and silencing that work together to ensure justice in cases of sexual assault is still largely biased against victims.

The memoir introduces Una as a pre-teen — playing with a dollhouse her father built for her, wearing her older sister’s clothing, discovering her own taste in music; all the typical coming-of-age experiences for a young girl just starting to experiment with her own identity. That identity, however, is soon interrupted — to use Una’s own, poignantly accurate word — by an older man named Damian, who pretends to think Una is much older than she actually is. Before Una has even begun to understand what boundaries and consent are, hers are violated; and while Damian is the first man to overtly dominate Una’s body and spirit, he isn’t the last:

“First he got my trust, then he got me alone,” Una writes. “Being exploited because you are vulnerable is not the same as giving consent.”

Una’s own assaults take place against the backdrop of a larger, national violence. Between 1976 and 1981, Una’s hometown of Yorkshire, England was plagued by a violent, ritualistic serial killer deemed the “Yorkshire Ripper” who attacked his female victims with a hammer and a knife. The killer earned his nickname because of assumed (and ultimately disproved) similarities to the infamous and unidentified English serial killer Jack the Ripper, who preyed almost exclusively on prostitutes. The Yorkshire Ripper, however, did not — but the police’s inability to accept the evidence, even going as far as to discount the Yorkshire Ripper’s first surviving victim’s testimony due to the fact that she was young, and “didn’t look like a prostitute,” allowed the Yorkshire Ripper to go uncaptured for over five years, during which he murdered 13 women and assaulted seven others.

“Why is the idea that women and girls deserve what they get so much easier for societies across the globe to accept than the fact that violent males cause misery to millions worldwide, in times of peace and times of war?”

Rather than focusing on the mounting evidence, the police instead focused on the lives of the Ripper’s victims, a decision that directly implied some collective lifestyle choice had earned these women their murders. The messaging absorbed by Una and the women throughout her community during this time was clear: you are responsible for what is done to your body, and if what is done to your body is bad then you must have deserved it.

At the same time, a young Una is learning to wade through the treacherous waters of a high school where her reputation as a “slut” has preceded her. Never mind that Una has been taken advantage of by both older men and her peers and, in a culture of silence, has learned nothing about her inherent right to both offer and withhold consent at her choosing. The discussion of Una’s sexuality — and her subsequent value as a human being — mirrors the discussions taking place on a national level about the victims of the Yorkshire Ripper: Una deserved it, the murdered deserved it. Good girls don’t deserve it. Do the math.

“…This is how I found out I had something called a reputation that I was supposed to have been looking after. I didn’t even get a good look at it before it was gone.”

While it’s easy to become wholly immersed in Una’s vivid, striking text, let’s not forget Becoming Unbecoming is a graphic memoir. The images work beautifully in tandem with Una’s writing — most are simple two-to-four color sketches, but the depth of emotion that resonates through them is palpable. Certain themes are often repeated in ways that become increasingly powerful. In one, Una is pictured as a girl carrying a wordless speech bubble: sometimes it’s a heavy knapsack she’s shouldering up a hill, sometimes it’s an enormous load she’s dragging behind her, and at other times it’s a balloon lifting Una to the top of the page — symbolizing that silence can often become heavier than what happens to you in the first place. In other images Una is pictured as pieces of a paper doll, lined with fold-over tabs for changing outfits and identities: girl scout, nurse, musician, court judge.

“I wonder who I would have been had I not been interrupted so rudely?”

But of all the images, those that struck me the most were Una’s portraits of the 13 women murdered by the Yorkshire Ripper. By the end of the graphic novel the serial killer has been caught — and other than being a serial killer he is an unremarkable, neighborhood man named Peter Sutcliffe. It’s impossible not to compare the public response to Sutcliffe’s capture with the responses offered to his victims. Neighbors were surprised to discover the killer was Sutcliffe, Una notes, mentioning what a lovely man he was — markedly different from the gossip about alcoholism, prostitution, and the suspect nature of leaving the house at night that proliferated Yorkshire neighborhoods after each female murder victim was identified.

And so Una draws all 13 of them as she imagines they would be today had their lives not been cut short. Some of the women are old and others are still quite young. They are cooking and hiking, walking their dogs and watering their plants, pursuing their careers and reclining in hospital beds, holding their grandchildren and taking crowded family photos. And after the barrage of violence inflicted upon the female body throughout the memoir, each image — resonant with the loss of all that could have been — is painfully moving. Una, in finding her voice, has given a small bit of voice back to each of these women as well.

“Imagine the volume, were we to hear the sound of all those voices at once.”

More like this
MOBO Awards Found Kanya King On The Woman Whose Grit & Determination Spur Her On
By Kanya King
Amanda Gorman Shared A Powerful Message On Meghan Markle’s Penultimate Podcast
By Darshita Goyal
The 'Firefly Lane' Book Ending Teases Way More Tears To Come In 2023
By K.W. Colyard
Allie Rowbottom Will Have Her Feminism With A Side of Botox
By Samantha Leach
Get Even More From Bustle — Sign Up For The Newsletter