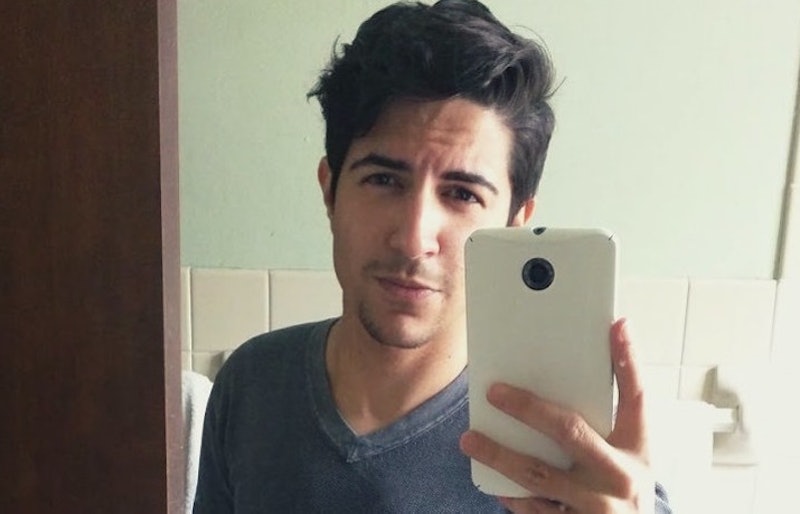 Despite growing awareness that gender is a spectrum and not a binary, transgender folks are often still expected to fit in a “boy” or “girl” appearance box. Those of us who do want to transition from one binary sex to another are expected to ditch certain clothes, makeup, and accessories, and those of us who openly embrace a nonbinary personal style have to deal with awkward looks and uncomfortable questions.

While many people assume the sonic boom of harsh criticisms from a family member, friend, or colleague is the hardest thing for trans people to deal with, it usually isn’t. For many, what are most difficult are microaggressions — brief, often well-meant canned comments like “But you don’t look trans!”

Transgender folks have learned to field it all, from awkward co-worker interactions to probing parental questions. But learning to cope doesn't mitigate the effect microaggressions have on us, and being curious or uninformed doesn't excuse someone for making an offensive remark.

If you're wondering how to be better-informed when interacting with the trans people in your life, take it from those who have experienced the effects of poorly chosen words firsthand. Seven trans people shared their wise words about the don'ts of discussing their appearance and style. Think of it like What Not to Wear, except it's What Not to Say to Us Ever, Please.

“I've had a few people tell me I should cut my hair if I want to be a man or look like a man,” says Gabriel Vidrine, a transmasculine person. “I have long hair. I like long hair on men (my husband has long hair), so I don't want to cut my hair. Even one of my co-workers said she couldn't see me as a man (and deadnamed me) because I have long hair.”

Vidrine points out that facial hair can be challenging for trans folks, too. “I constantly feel the lack of facial hair, because at this moment, that's probably what's keeping me from passing the most (I get ma'amed constantly, even when wearing obviously 'masculine' clothes),” they write.

Austin, a trans man, mentions how facial hair impacts the way he’s treated: “As someone who has been taking testosterone for years now but only recently started growing noticeable facial hair, it’s been rough to have my internal gender identity stay the same — consistently masculine — while having people basically change their treatment of me depending on what I look like."

2. “If I Didn’t Know You Were Trans, I Never Would Have Guessed”

“I've heard ‘If I didn't know you're trans, I never would've guessed’ more times than I can count,” Elliot Wake, a trans man, writes. “It's a double-edged sword. They're trying to compliment me on how well I pass as cis (thanks, but... I'm trying to pass as me), and they're also reinforcing cisnormativity, implying that there's a telltale ‘way’ that other trans men look, and that I don't look that way.”

“Of course, these people mean well,” he adds. “Cisnormativity is just so ingrained in culture and society that they assume if I'm trans, my ultimate goal must be to look as much like a binary cis male as possible—and that trans masculine folk who don't look like cis men have somehow failed that unstated goal.”

"Trans people are virtually required to look exactly like cis people of the same gender to get respect and recognition," Austin says. "Obviously, that’s unachievable for many trans folks for a variety of reasons, especially nonbinary folks. The trans folks who get uplifted in the media and held up as success stories are pretty much a) very feminine, traditionally pretty trans women, b) muscular, masculine, super-rugged trans men, and c) thin, androgynous non-binary people with rainbow hair."

“[T]he comments that hurt are the ones that note the difference in my appearance as a trans woman from a ciscentric point of view. ‘You're cuter than me and I'm a woman!’ The statement specifically excludes me from womanhood," says Katelyn Burns. "Trans women can be beautiful in our own way without being judged on ridiculous cis beauty standards.”

Teela Wild, another trans woman, is used to hearing comments like “You look so much like a real woman!” and “You’re transgender? But you’re so pretty.”

“The way many people think about us is directly related to how cis we look,” Wild writes, “and is sometimes directed at us as backhanded compliments.”

Eli Knight, who identifies as a man who just happens to be trans, recalls his parents’ reactions to learning about it. “During my letting them in, my family completely denied my existence by saying stuff like ‘No man has hands your size’ (dad), ‘You don't belong in the women's section or the men's’ (mom),” he writes.

Knight has faced scorn in public for not wearing traditionally masculine clothes before and during his transition. “When I was at the Pride March back in 2014, I believe, I was newly out, to NYC, and wasn't transitioned yet, so I had this maroon jacket that I got at a college sale for folks who are homeless but need clothes,” he writes. “As I walked by, because it was over by then and I was exhausted that I had more walking to do, there were five folks my age sitting on a brownstone stoop, one of whom said, ‘Why is that guy wearing dyke clothing?’”

5. “You’re Too Feminine/Masculine To Really Be Trans”

“For instance, a lot of the cis guys I know look a [variety] of different ways, have different body types, and express their gender presentations differently without worrying about someone calling their essential maleness into question,” says EE Ottoman, a trans man. “While, as a trans man, I feel like I have to always toe that line, because if I look too feminine, people are going to decide I've been lying about being trans and being male all along.”

He adds, “I will say that I would like my body to more accurately reflect certain markets of traditional maleness but I don't generally worry about looking too feminine or not meeting a standard of normative attractiveness.”

6. “If You Are Transitioning To Being A Man, Why Do You Wear Makeup?”

“I feel we get pressured to dress a certain way, to only dress in clothing of one gender (people now get confused if I decide to wear a dress because they know I'm trans masculine), and to conform to traditional standards of beauty,” Vidrine writes. “Trans women have to wear makeup and have top surgery to be pretty, trans men must have beards and lift weights and have 0 percent body fat. Obviously, I don't believe those things, but that's the kind of thing I feel we get all the time as trans people. If we don't conform to those standards, we don't pass, or we get confused questions about if we're really trans or not (‘If you wear makeup, why are you transitioning to being a man?’)”

Jessie Divine, a genderqueer person, writes, “In a world that pushes trans people to look like cis people, nonbinary people are pushed to either pick one (barf), or toward neutrality. Which is great, if that's how you identify. But I don't. So it's like, people want to be able to look at your clothes/hair/makeup (or lack thereof) and deeply understand exactly how you identify.”

Sometimes appearance microaggressions come from within the trans community, Wake points out.

“Some trans people internalize this pressure to fit the cis binary and in turn police each other with it,” he writes. “We reject nonbinary and agender and non-transitioning folks as ‘not trans enough.’ We criticize those who don't dress or present in lockstep alignment with the gender binary (trans men can't wear dresses or makeup; trans women can't be butch; etc.). We drive ourselves into the worst roles in gender performance: trans men enacting toxic masculinity, trans women playing to misogynistic stereotypes.”

He adds, “Inadvertently, trans folk can end up being some of the staunchest enforcers of cisnormativity. We internalize the pressure to fit in (because the alternative is rejection, hatred, violence) and twist it back around on each other. Audre Lorde's brilliant aphorism comes to mind here: ‘The master's tools will never dismantle the master's house.’ To liberate ourselves from cisnormativity, we first need to stop wielding it against each other, and against ourselves.”

And it’s long past time for us to dismantle the idea that there’s a right way to dress, look, or be transgender. Moving forward, it's important that we're mindful of how we speak about trans beauty and style — even if you support trans rights and visibility, comments like these can still derail progress.