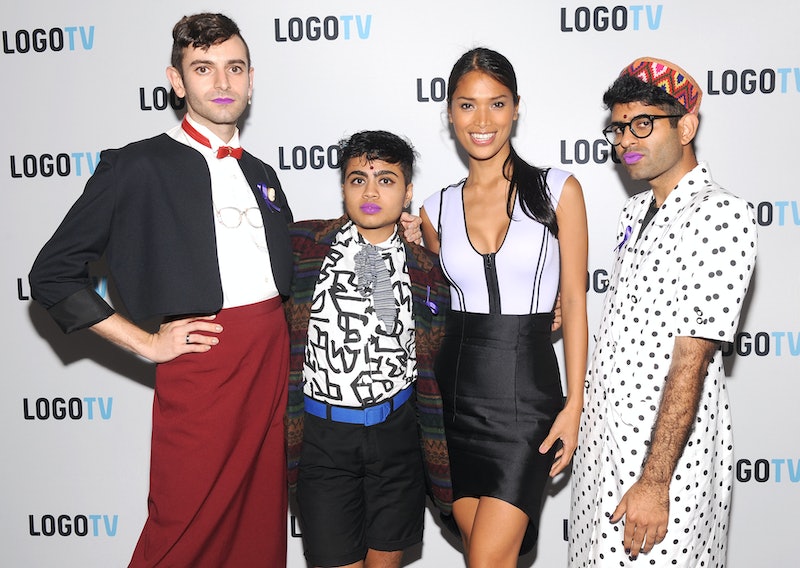 I've always thought that politics have a way of informing art and fashion. As a young lover of all things sartorial, watching Gaga strut in machine gun bras and meat dresses or admiring Jeremy Scott's critique of capitalist consumerism make it clear to me that fashion is political — even if sometimes the artist doesn't intend for it to be. Personally, I believe all art is political. Whether we make conscious choices to reflect this or not, our creations mirror our personal experiences, struggles, and beliefs, therefore representing the inherent politics of each individual artist or human.

For some, however, it is almost impossible to step away from this political identity. For trans and genderqueer people, as well as other gender non-conforming individuals, wearing clothes for the fun of it is rarely that simple. When living in a society that doesn't know how to classify you while existing in a body that is gender fluid, your very existence is hugely political. As a person who identifies as genderqueer, and as a person assigned female at birth who loves to present masculinely half the time, I can definitely relate.

Fashion has always been an exciting way for me to express who I am. Choosing clothing that reflects my gender fluidity and wearing things that may break the gender binary or the gender norms as assigned to me at birth is nothing short of liberating, especially after being closeted for so long. Picking out my outfits each day, and deciding whether or not to present the way I feel on any given morning (which is still difficult at times) feels hugely political even before I leave my apartment. This is because when I dress enthusiastically in the way that I was born to present, I might be helping destroy any harmful ideas of femininity and masculinity that I (and hopefully those who see me) have been internalizing.

Dressing in a way that challenges the gender binary can feel a little risky at times, but mostly in an enlightening way. Since I don't identify as either man or woman, choosing to present femininely feels just as political. Sometimes, even swiping on my favorite lipstick seems like an act of subversion.

However, there's an additional layer of risk for humans assigned male at birth who want to present femininely. No matter what, my partner assigned male at birth will always attract more attention when they wear lipstick than I do when I'm dressing in men's clothes. Time and time again, I've had to check my privilege as a person assigned female at birth: A person who is (by society's standards) "allowed" to wear makeup and dresses. After all, living in a masculine-dominated patriarchal society has meant that dressing masculinely has hardly given me any trouble. If anything, I am also harassed way more when dressing femininely, likely because cat-callers mistake me for a cis woman.

Writer and activist Alok Vaid-Menon discussed their experience with this in a video for Refinery29 focusing on non-binary fashion. "There's a material consequence to me presenting feminine, and there’s not a material consequence to me presenting masculine," they said. "The minute I wear lipstick, or the minute I put on earrings, or the minute I’m wearing a skirt, my entire reality shifts."

Vaid-Menon is referring to the increased stares and negative attention being a person assigned male at birth brings when that person is sporting something feminine. They are also referring to their life being significantly more endangered when they wear a dress versus when they wear a tie. The world over, one can hear stories of men or masculine individuals being attacked for wearing dresses or skirts or simply for looking feminine. Much of this arguably stems from transphobia, and the way society teaches people to perceive gender non-conforming people. It's a fear that people like Vaid-Menon experience, and it's sadly the reality that many genderqueer and trans folks experience too.

"That’s just what our world is," they told R29. "When we see something that’s confusing, we have to categorize you immediately and we need to be very clear that that categorization comes from fear."

This fear and need to categorize can arguably lead to violence as well. The simple fact is that within the LGBTQ community, trans people are the most prone to being attacked and murdered. According to The Advocate, "Hate-motivated violence against transgender people rose 13 percent [in 2014], while the number of overall incidents of hate-motivated violence against LGBTQ and the HIV-affected communities dropped 32 percent, compared with the previous year." Additionally, The Advocate reported that "researchers identified a four-year trend in which trans women and LGBTQ people of color experienced a greater risk of homicide than LGBTQ people and HIV-affected communities as a whole."

Even with the increased visibility of trans identities in the media — thanks to people like Laverne Cox, Janet Mock, and Caitlyn Jenner — gender non-conforming humans and trans women still risk trouble whenever they leave their homes. According to transgender rights activist Masen Davis, we are currently in something of a problematic, "in between" place.

“Right now, we’re experiencing a Dickensian time, where it’s the best of times and it’s the worst of times at once,” Davis told Time Magazine. “We’re seeing a marked increase in the public awareness about transgender people and really incredible progress for trans rights, especially from a legal perspective. At the same time, we still represent and are part of a community that experiences incredibly high rates of unemployment, poverty, and violence.”

This is why non-binary fashion is radical and inherently political. Just by getting dressed in the morning, we are challenging cis-normative ideas of how society should be run, protesting the oppression and deaths of our community, and in some cases putting our lives at risk to do so.

Writer, activist, and star of MTV's True Life: I'm Genderqueer Jacob Tobia discussed their feelings about non-binary fashion with me over the phone.

"Fashion is actually one of the most political things I do on a daily basis," they tell me. "It is a pretty radical act for a genderqueer person to wake up, put on the clothes that they want to wear, and wear them out into the street and out into the world."

Tobia feels very empowered by their fashion choices, but the risk of presenting femininely as a person AMAB does not go unnoticed to them. They describe the way they dress as a "genderqueer gladiator," with their dress as their armor. But said armor certainly has its cracks.

"The same dress that makes me feel fantastic and free is the dress that makes me feel terrified, alone, and at risk," they tell me. "The same garment that will get me attention on a red carpet will get me murdered in the street. And I mean that with no exaggeration. Trans people and genderqueer people are murdered pretty much every single day for having the audacity to express ourselves and our gender identity publicly."

Challenging gender norms and redefining gender and femininity as we see fit can undoubtedly help to dismantle trans-misogynistic institutions, which Tobia, Vaid-Menon, and any other gender non-conforming person does on the daily with their outfits alone.

Vaid-Menon further discussed re-learning and redefining femininity as a way of empowerment with R29, through gender identity as well as dressing. Destroying stereotypical ideas of femininity such as weakness, and learning exactly how femininity can empower them, helped Vaid-Menon embrace feminine presentation and identity.

"What my femininity looks like is just a radically unapologetic flamboyance," they told Refinery29. "Being regal and being queenly. Because these were parts of me that were literally punished out of me as a child. And now for me it’s just dramatic gestures, it’s complete excessiveness, it’s high-pitched voices, it’s over reactions, gossip — it's all those things that I was taught were weak and futile that I'm now realizing are actually subversive."

However, constantly being subversive and being a genderqueer fashion gladiator in general is not always easy. To my core, I am a political being who is constantly concerned with feminist and gender-based activism. And inhabiting a genderqueer body only furthers that.

But as a human, I understand not wanting my fashion choices to always be a statement, or constantly considered political. This role, while important and subversive, can be trying. But since this is my body and identity — and since society still perceives gender non-conforming people a certain way — I have no choice but to have my identity politicized.

One day, I don't want my gender identity or pronouns to always be the topic of conversation when discussing fashion and gender. I hope to be perceived as a human who wears cute clothes, rather than a gender non-conforming person who's known for breaking the binary with their style decisions. I love fashion, and I don't always want the beautiful things I'm wearing to be looked at through a gendered lens.

Tobia feels similarly. They tell me, "I am dreaming of a world where my dress can just be my goddamn dress, and my dress doesn't have to be political. It can just be fabulous! I'm so excited for how I dress to not be a statement because when it's not a statement, that means I am loved and accepted and free."

Until then, however, we can rest assured in that having our identities politicized is hopefully leading to a greater good of sorts. As Tobia assured me, being our fierce, fashionable selves and working towards a more profound understanding of gender in our society through the clothes we wear is nothing short of a noble effort.

It's a fight that characterizes my everyday life, and it's a pretty worthwhile one.