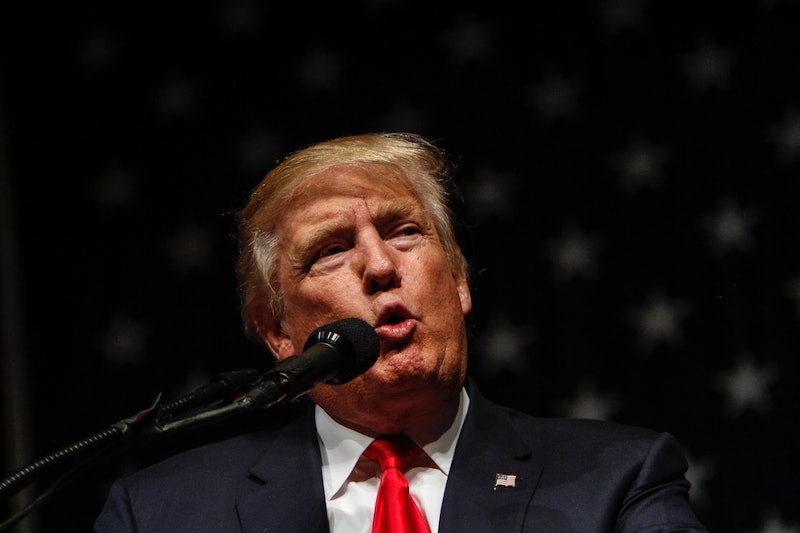 At this point, it's common knowledge that Republican presidential nominee Donald Trump is making up new claims every other day — if not more frequently — to blame his flailing campaign on anyone but himself. Most recently, he claimed that the entire presidential election is somehow "rigged" to favor Hillary Clinton and make him the loser he dreads being. In response, some Twitter users began tweeting about other things Trump has claimed are rigged throughout his time in the political spotlight. Tweets with the hashtag "Things Trump Claims Rigged" show that Trump's claims become increasingly absurd as he loses ground in this election. Not to mention, they point out how accidentally satirical his campaign has become.

During his time as a presidential candidate, Trump has claimed that a number of things are rigged: Clinton's email scandal, the media, both the Republican and Democratic primaries, and the entire general election. So, in response, people are coming up with other things Trump could plausibly think are rigged, and in doing so, are once again showing that in this election season, left-leaning humor-peddlers on Twitter are the real MVPs. Below are some of the best, realest, and most hilarious tweets with the "Things Trump Claims Rigged" hashtag.

1. When Bigotry And Idiocy Meet

Trump is still under fire for a particularly egregious moment from last November, when he openly mocked a disabled journalist at an event. This tweet provides a perfect example of something Trump could easily say is "rigged" against him.

You'd think Trump would realize that if the media and Republican primary were rigged any way, they'd be in his favor, but alas...

4. And Truth Will Out

In the perfect mix of humor and terrible truth, this tweet shows another "rigged" item that prevents Trump from getting his way.

Once again, The Donald's overuse of the term "rigged" proves his shallow understanding of the term.

AKA the meddlesome women that make Trump supporters want to #RepealThe19th.

At this point, what ISN'T rigged, am I right ladies?

While Trump's unhinged suggestions and behavior are incredibly frightening and make him into a sort of populist hero for the anti-PC crowd, they also provide excellent fodder for those of us who wish to laugh, if only to stop ourselves from crying. Soon, we'll get to look back on all of this and chuckle — hopefully.