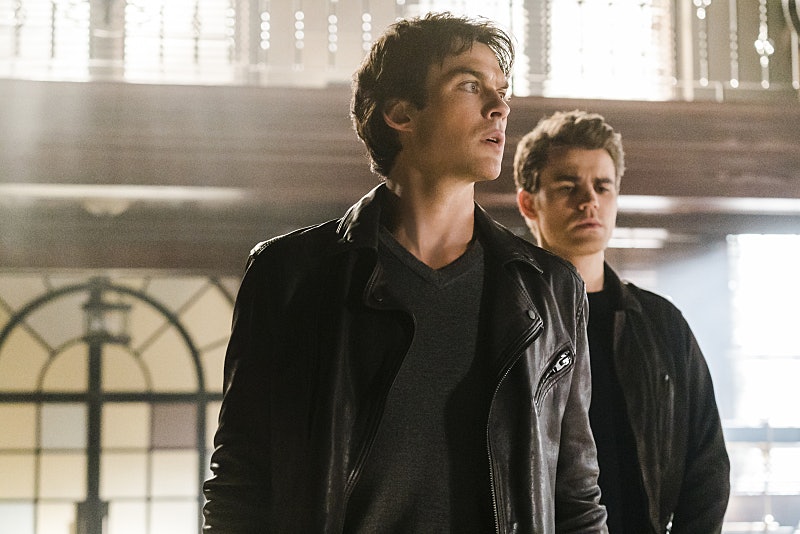 It’s the beginning of the end. It was pretty devastating for fans over the summer when CW announced Vampire Diaries is ending after Season 8, and now all bets are off the table for who will die and who will make it through to the end. Kat Graham has already teased that a major Vampire Diaries character will die. “Not in the season premiere — but, you know, midway through, someone’s kickin’ the bucket,” she told The Hollywood Reporter in August. I am predicting a very bloody season ahead.

The show left off in a very weird place. Damon and Enzo are off on some terrible killing spree after they entered that vault they were definitely not supposed to go in. In case you forgot, in order to save Bon Bon from murdering them all (with her newly acquired hunter gene), they had to kill the last of the Everlasting. The final Everlasting was concealed in the vault in the armory, of course. Damon and Enzo got trapped in there after saving Bonnie and when they finally opened the doors to the armory they were gone. Now it’s Stefan to the rescue. On a lighter note, Caroline and Stefan rekindled their romance finally. It was super cute.

So, let’s talk about those impending deaths and who’s most likely to die in the final season.

Elena won’t die. She will wake up at the very end of the season and be with Damon at the end. It has to go down that way or fans will lose their minds.

Killing off Stefan would just be cruel. Plus, there’s a place for Stefan in New Orleans with our favorite original family after The Vampire Diaries ends. I refuse to believe they would ever get rid of Stefan.

Like I said before, Damon needs to sail off into the sunset with Elena. Hopefully, he will take the cure and they can be together as humans in the end.

He’s already died and it was one of the most traumatic moments on the show for me considering my favorite relationship on the show is Ric and Damon. Taking him away again would be kind of pointless and repetitive for the show. Ric needs to stay alive because he’s actually the best.

Tyler Lockwood is back. Why bring him back just to immediately murder him? It seems unlikely that we’ll be losing Tyler.

I really hope they don’t kill Caroline off because she’s pretty much been carrying the show for a few seasons now and she’s pretty awesome. I am also secretly hoping she lives and heads to The Originals after this. How long do I really have to wait for Klaus and Caroline to date? However, Candice Accola posted this cryptic photo a few months ago with dots all over her skin for some special effects. What happens to vamps when they die? Oh yeah, desiccation. It could be the end of the road for Caroline.

I am a huge Enzo fan, but on the list of people likely to die, he’s actually up there. People like him, but he's not the most important character. He's just the right person to die.

Bonnie has to die for Elena to wake up. Unless they’re able to find a loophole, Bonnie will die by the end of the season. There’s no way they’re ending the series with Elena still asleep. You know Nina Dobrev coming back to finish out the show. Sorry, Bon Bon.

Somehow, and I’m still not sure how, Matt Donovan has managed to stay alive. I would love it if he could be the only one who stays human and alive for the entire series (except for those times he died wearing the magic right), but it just doesn't seem likely to me. Especially if he’s still meddling in their drama.

Yeah, yeah, Valerie helped Stefan run away from Rayna Cruz, but she’s as good as dead. We care about her the least and she’s pretty much just standing in the way of Caroline and Stefan being together forever. I say, kill her, if anyone.

They always turn up dead in the end. I promise.