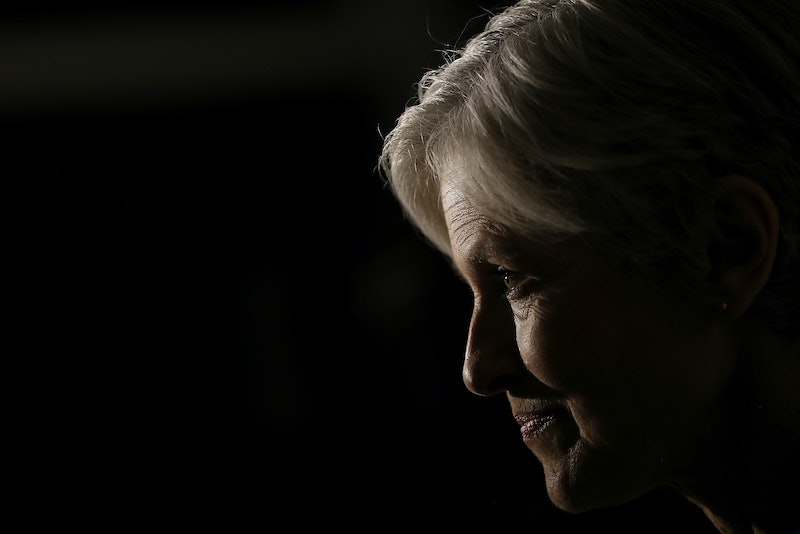 It's become a commonality for Americans wanting to follow politics: we turn to comedy to digest the issues coming out of the news cycle. This happened on Sunday night, when John Oliver debunked Jill Stein and her main campaign talking point in epic fashion. The best known third party candidates, Stein and Gary Johnson, have long wanted to be treated the same way as the Democratic and Republican nominees — and Oliver did not hold back in giving them both that treatment.

We've collectively watched Oliver — once a protégé of Jon Stewart, now a brilliant commentator in his own right — charm us all with his British accent and his straightforward, hard-hitting takes on the issues. This time, he turned his attention to third parties, first focusing on Stein and her proposal to wipe out student debt — the plank of Stein's platform that he likens in importance to Trump's proposal to build a wall. The problem is, Oliver argues, that Stein doesn't seem to understand the monetary mechanism that she's saying she would use.

Her argument is that she will use quantitative easing, one of the tools employed during the bank bailouts in the last decade, to erase student loan debt and "free a generation of Americans from debt servitude." It sounds nice, right? A bunch of economics-sounding words put together in a coherent sentence that involves getting rid of student loans? Well, according to Oliver, it just can't ever work that way in real life.

In the most basic description, quantitative easing is when a country's central bank issues new money into circulation, and it's a trick only pulled out in the most dire of circumstances. In the U.S., it's also completely under the control of the Federal Reserve Bank, because giving that power to a single person, i.e. the president, would fit much better in the government of a former Soviet dictatorship.

This, however, is a principle that Stein doesn't seem to quite grasp, as her proposal seems to suggest that she herself would employ quantitative easing, which she refers to as a "magic trick" to simply free the students and make everyone happy. Her main proposal, Oliver points out, is as absurd and unachievable as Trump's idea to build a wall and make everyone pay for it. Need any more convincing not to believe that policy proposal? Oliver also won't let you forget that she's been deliberately vague and hasn't outwardly refuted anti-vaccers or 9/11 truthers.

A serious candidate? Oliver gave Stein the chance to be one, and the results don't come out so well for her. As of now, no candidates — and that's including third party ones — are on his good side.

More like this
'Waterloo Road' Is Back, With More Than A Few Familiar Faces
By Sam Ramsden and Vivian Iroanya
Matt Hancock Broke a Major Rule With I’m A Celeb
By El Hunt
17 Photos Of The 'Wednesday' Cast Vs. The 1991 'Addams Family' Cast
By Grace Wehniainen
'Cheers' Stars Pay Tribute To Kirstie Alley After Her Death To Cancer At 71
By Jake Viswanath
Get Even More From Bustle — Sign Up For The Newsletter