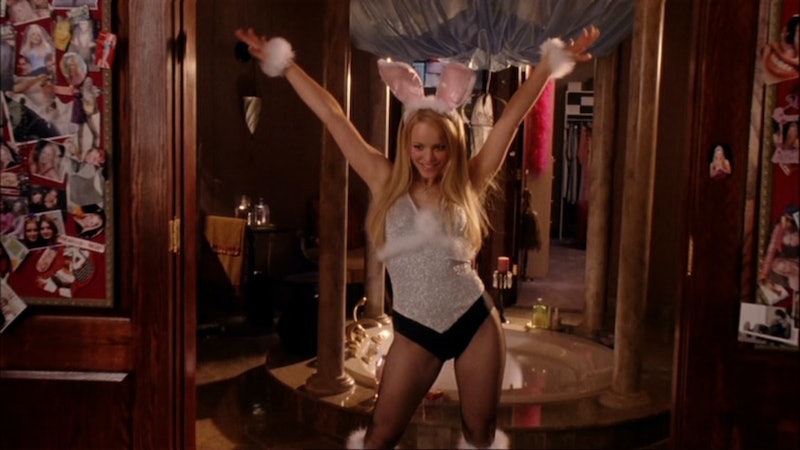 Halloween used to be a children's holiday, where little ghosts and scarecrows would run around in their mom's homemade costumes, snagging as many chocolates from their neighbors as they could get away with. But now the holiday been taken back by grownups as well, swapping out jack-o-lanterns and Kit Kats for witchy cocktails and tube top dresses. The history of sexy costumes is a raucous one, where centuries of people slipped into the shadow world of masks and body glitter and found they could indulge their tastes for gambling, booze, and skin without consequence.

Today, people often use sexy costumes as a way to throw away their inhibitions (if only temporarily), and since it is seen as a night of misbehavior and mischief, they can do it without offense. But more than that, among the rented glittery costumes and plastic micro-minis, sexy costumes can also be a direct reflection of culture: What we now find acceptable, what pushes the envelope, and what can still shock.

There are a lot of judgments attached to sexy Halloween costumes that veer towards the sexist and mean-spirited, but what these get-ups really are are a mirror of our zeitgeist. While wearing a garter belt with a Snow White costume might attract a raised eyebrow on the train heading to a party, it really shouldn't. Because each person who slips into costume is just a product of their time. Being sexy isn't bad — it's just flirting with societal boundaries. And we've been doing it for centuries. Before we understand the feather boa costume, we have to understand the older, non-sexy version of it.

Halloween costumes all started with Hallow Mass, where people prayed for the dead and warded off evil ghosts. But as Nicholas Rogers, a history professor at York University and author of Halloween: From Pagan Ritual To Party Night, explains in an email interview with Bustle, it wasn't all about the spirit world. "Hallow mass was also about regeneration and fertile marriages, where boy choristers would dress up as virgins, i.e. cross-dress, but without any lascivious overtones," Rogers says.

After the late medieval period, all Hallow's Eve disappeared from the social calendar, but costumes re-emerged in 18th and 19th century masquerades.

"Masquerade balls sometimes had what were regarded as very sexy costumes, particularly involving cross dressing," Valerie Steele, director of the Museum at FIT, shares in a phone interview. Women would dabble with dressing up as men and men would try on hoop skirts for the night.

The student art balls in Paris particularly were famous for body exposure, but while some might show up in period pieces and wearing milk maid or sailor costumes, Steele points out there was a catch on how much you could flash. "In 19th century balls women would have skirts almost up to their knees, as well as women in trousers. But these were mostly prostitutes," Steele says. But whether you were an art student or the wife of a Duke, throwing on a costume was a powerful form of escapism.

"Sexy costumes reflect our more outrageous fashion, which people feel is acceptable on Halloween because it's a period of license and transgression," Rogers points out. Anytime you're allowed to slip on a mask, you're allowed to dabble in things outside of your normal behavior.

The trend followed into the Victorian era, where Victorian Americans resurrected the tradition of 15th century Halloween in all its spine-tingling glory. "What the Victorians did was take the elements they loved best about Halloween — its rural origins, symbols, and spookiness (Victorians were keenly interested in ghosts) — and used them to create a really great party. Late 19th century magazines were filled with Halloween party hints, recipes, and the folklore that went along with it all, most of it co-opted from the folklore and literature of Scotland and Ireland," Lesley Bannatyne, author of Halloween. An American Holiday, An American History and Halloween Nation , shares in an email interview with Bustle.

And what's a party without costumes? While Victorians might have been notoriously prudish, they did allow themselves to dip a toe outside the box and into the exotic. "The costumes in that time period could run the gamut: They could be anything from a glamorous conception of 'night' to something they’d consider exotic, like a costume that evoked a foreign land— Egypt, maybe, or Polynesia, or Spain," Bannatyne explains.

They liked to slip into the exotic because it offered a valid excuse for being undressed — they weren't actually naked, they were merely trying on a different culture. Just like how you can pretend to be a "sexy nurse" because you're trying on a profession.

"If you wanted to dress up in a Middle Eastern costume in the 19th century, you could potentially wear what looked like their bloomer costumes — full trousers and a long tunic — because that was an acceptable way, within your private sphere, of being transgressive. You were doing it from another culture," Steele explains. But she also points out costumes didn't only let the wearer dabble in sex appeal — they were also an outlet to feel beautiful.

In that vein, dressing up as a character allowed you to make a statement to those at the party with you. "If you have a wife of a multi-millionaire in New York dressing up as a historical queen, you're seeing an assertion that she's seeing herself as a modern aristocrat," Steele explains.

Costumes allowed a woman to make dramatic statements about herself — she was beautiful, powerful, bold — all the while hiding her from public scrutiny because it was all pretend. "Halloween has always been our most transgressive holiday; whatever box you’re in, this is the night to come out. Costumes express some aspect of ourselves that we don’t usually forefront, be it jokester, wry satirist, or sexy schoolgirl," Bannatyne explains.

Halloween costumes continued into the early 20th century, but the looks were mild if not more playful. "Halloween costumes almost always follow cultural trends, so the exuberance of 1920s America plays out in its costumes. These included paper witch hats, pumpkin-print skirts, aprons and collars with Halloween patterns," Bannatyne points out. So no sexy bunny rabbits just yet.

In the '50s, Halloween was hijacked by children, moving it away from midnight parties and martini glasses and into church basement mixers and afternoon trick or treating. Moms would dress themselves up as Minnie Mouse or classic witches to accompany their kids from door to door, but Bannatyne points out there was still some room for sex appeal, thanks to Tinseltown.

"You can still find sexy costumes on women as early as the 1940s, when movie studios posed their starlets in themed Halloween publicity shots. Lots of sexy witches and cats came out of Hollywood, and influenced costumes to come," Bannatyne says, but stresses that there was still more of "a sense of costume-as-disguise, rather than what we have now, which is more costume-as-self-expression." Rather than owning your sexuality, you borrowed it for an evening while protected by your mask.

The sexy element finally hit full force in 1970's Greenwich Village, thanks to the sexual revolution and decriminalization of homosexuality. It moved out of polite suburban homes and boozily tripped its way back into nightclubs and glittery parties. It was the Parisian art student balls all over again. "The fantastical gay parades of the '60s and '70s showed the rest of the adult world how outrageous costumes could be. Halloween costumes often push at the boundaries of what we’ll accept for everyday reality. Sexuality could be expressed. So could irony, satire, and political commentary," Bannatyne shares.

According to Rogers, in these parades you'd have bodacious drag queens, Andy Warhol parodies, tubes of lipstick, and queens dressed super macho to parody the military in the Vietnam war. In this way Halloween is not only a reflection of what's happening in society, but an opportunity to push boundaries in the name of progression and open mindedness.

In the '80s, John Carpenter's Halloween gave a slasher spin to the holiday. Before that, horror movies had very little association with the holiday. "Frankenstein (1931) came out on Thanksgiving; Dracula (1931) on Valentine’s Day. Even the Exorcist (1973) was released around Christmas," Bannatyne explains. But Halloween made the holiday the centerpiece, and it opened the doors to horror-centric costumes. While there weren't any sexy zombies wandering neighborhoods just yet, they were right around the corner.

With the explosion of body-glittered pop princesses and low waist jeans in the Naughties, costumes took an intensely provocative turn. As culture became more laxly sexual, so did Halloween outfits.

"Even though Elvira made Halloween costume cleavage (as well as Coors beer) popular as early as the '80s, it took a few decades before everyone on television and in films wore plunging necklines and short skirts. Yes, Halloween follows popular culture, and that certainly includes fashion. But what Halloween costuming does is exaggerate what’s going on — so if news anchors are unbuttoning their top two buttons of their blouses, Halloween costumes will push that envelope," Bannatyne shares.

But while that might explain why we have sexy French Maids, that doesn't explain why some of us dress up like sinful Crayolas. Is that just women getting too swept away with the idea? According to Bannatyne, no. "What that is is pushing the envelope all the way through sexiness into satire, like the 'sexy bird flu' or 'sexy pizza rat' costumes. I’m sure there’s sexy Trump this year, somewhere, somehow," Bannatyne says. It's almost tongue in cheek.

In the end, "sexy" Halloween costumes aren't just an excuse to wave our sexuality loud and proud without any judgement for a night. It's also a way to tip our hat towards where we are in society. Just like how masqueraders flashed shins and Victorians wore bloomers, your costume mirrors and laughs at what culture sees as transgressive at that point in time.

"Many people rage against the 'sexification' of Halloween, but it’s not Halloween that’s sexy. It’s our culture; it’s the images we see every day all around us. Halloween reflects who we are and what fascinates us, and for the last few years it’s been great legs and cleavage," Bannatyne says. And even that will change with time. "I thought it was interesting that America’s largest costume company, Rubie’s, found that sexy schoolgirls and kittens peaked in sales in 2006 and have declined ever since. We could be moving on to the next wave of Halloween expression," Bannatyne concludes.

Wearing a sexy costume allows you step out of character and explore what fascinates you about sexuality more than you would on a normal day. We've long had sexy costumes — it's just the definition of "sexy" that has changed. Don't judge the firefighter in booty shorts and push-up bra. Instead, mentally high-five her for taking the chance to step outside her box, and wish her a night of debauchery. After all, for centuries, that's what Halloween has been all about.