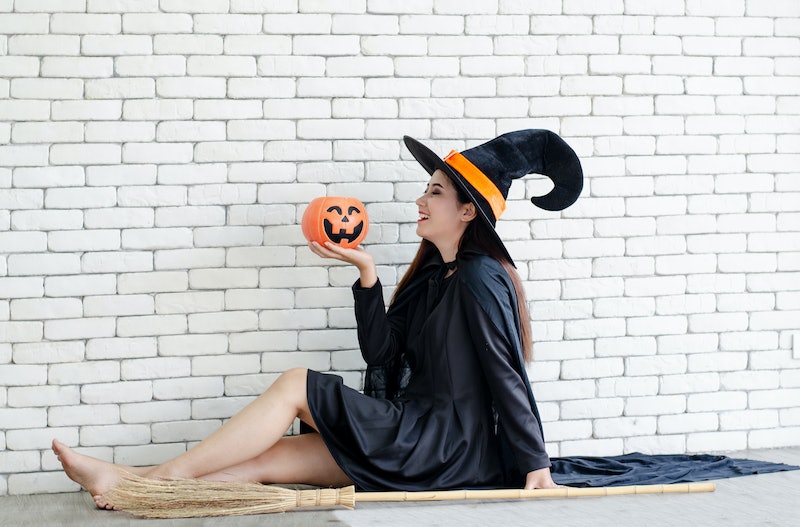 The National Retail Foundation reports that America will spend $8.4 billion on Halloween this year, and $3.1 million of that capital will be spent on Halloween costumes. Yup, according to the NRF, 67 percent of Halloween enthusiasts — from kids to millennials to middle-aged folks — intend to spend an estimated $82.93 a piece on dressing up for Halloween this year. Speaking as someone who fully intends to dress up like a hipster dude this Halloween — primarily because it's as easy and inexpensive as throwing on one of my men's flannel shirts and putting my hair into a man bun — I've often wondered: Why do we dress up on Halloween in the first place?

Halloween Costumes Have Been Around For About 2,000 Years

Though there's been some dispute about this among historians, it's believed that Halloween can be linked all the way back to Samhain, or "summer's end" — an ancient Celtic festival of the dead which was probably at it's pinnacle between the 9th and 12th centuries. The Celts — who lived in what we now know as Ireland, the United Kingdom, and northern France — thought ghosts, faeries, imps, and demons roamed the Earth on Halloween night. Since October 31st was New Years Eve for them, the Celts believed this was the one night of the year that the boundaries between the world of the living and that of the dead were the blurriest. In turn, Celtic people's would leave out food and drinks as a peace offering of sorts to the spirits, wear all white, and paint their faces in an attempt to camouflage themselves from evil beings. Celtic Druids would dress up as animals or supernatural beings, build bonfires, and then perform various plant and animal sacrifices to Celtic deities.

People Have Been Dressing As The Opposite Sex On Halloween Since The 9th Century, At Least

If you enjoy cross-dressing on Halloween as much as I do, then it will probably please you to learn that people have been playing with gender on Halloween since the 9th century. In 9th century Wales, it was commonplace for boys and girls to dress up as the opposite sex and go door-to-door begging for treats — but even when the Church started adapting Halloween into a religious holiday, the dressing up continued.

When Halloween started to become Christianized by the Church in the 11th century, Halloween became more about dressing up in costumes just for ceremony's sake — because 11th century Christians opted to pray for the souls of the dead rather than hide from them. Perhaps because celebrating death is so very similar to celebrating life, churchgoers would also pray for fertile marriages on All Hallows Eve. Oddly enough, part of this ceremony included eleventh century choir boys dressing up as female virgins for Hallow Mass.

Halloween Costumes Got Way More Interesting During The Victorian Era

From Charles Darwin's theory of evolution to the Industrial Revolution, the 19th and 20th centuries saw a considerable number of inspiring discoveries. Additionally, with travel becoming less and less difficult, people all over the world were able to learn more about different cultures. Not surprisingly, all of this newness inspired a slough of unique costumes and a collective need to take solace in the folklore of simpler times — making Halloween, and the tradition of donning Halloween costumes, more popular than ever.

On top of that, with books like Jane Eyre and Wuthering Heights being published in the mid-1800s, Gothic themes were huge at this point — and this was also reflected in how people dressed up on Halloween during the Victorian Era. Egyptian-inspired costumes, bats, ghosts, and Masquerade parties were super on trend during this time, and pretty much all costumes were still homemade.

Halloween Costumes Weren't Manufactured In The U.S. Until The 1920s

Believe it or not, the multi-million dollar industry of manufacturing Halloween costumes has been around for less than 100 years, because corporations didn't actually start manufacturing Halloween costumes in the U.S. until the 1920s. The three biggest names in the Halloween costume game back then were Collegeville Flag and Manufacturing Company, H. Halpern Company, and Ben Cooper. Collegeville Flag and Manufacturing Company actually started off as a flag-making company before they switched to costumes in the 1920s. H. Halpern Company was one of the first companies to license the images of fictional characters for their costumes, (think Popeye and Olive Oyl) and Ben Cooper is largely responsible for popularizing the custom of dressing up as pop culture icons. Perhaps because of this, Ben Cooper owned 70 to 80 percent of the Halloween costume market by the 1960s. Nowadays, Rubie's Costume Company has the Halloween Costume market covered.

The "Sexy Costume" Phenomenon Started Back in The 1970s

Interestingly enough, the Halloween tradition of marketing over-the-top sexy Halloween costumes to women actually started off as a badass way for gay communities and second-wave feminists to openly celebrate their sexuality. With the sexual revolution in the not-to-distant past, and gay community Halloween parades becoming the norm in cities across the U.S., sexy Halloween costumes became a way for marginalized groups of the '70s to push boundaries. Understandably, this lead to some pretty racy costumes.

In 2016, More Kids Are Dressing Up As Superheroes Than Princesses

For the first time in over a decade, more kids are expected to dress up as superheroes than princesses for Halloween, and it's kind of a big deal. This is especially notable because low self-esteem has been a steadily worsening pandemic among young girls for years — so even though princesses are totally rad, the fact that 2016 is the first time in eleven years that more little girls are expected to impersonate world-saving badasses than damsels in distress is kind of a big deal.

More like this
Here's How To Support Jewish People Amid Rising Antisemitism
By Hannah Orenstein
13 Gifts From Latina-Owned Businesses For Everyone On Your List
By Marilyn La Jeunesse
69 Great Gifts For Guys No Matter What Their Hobbies Are
By Teresa Newsome, Mia Mercado and Brittany Leitner
7 Joyful Alternatives To A Traditional Holiday Celebration
By Jessica Goodman
Get Even More From Bustle — Sign Up For The Newsletter