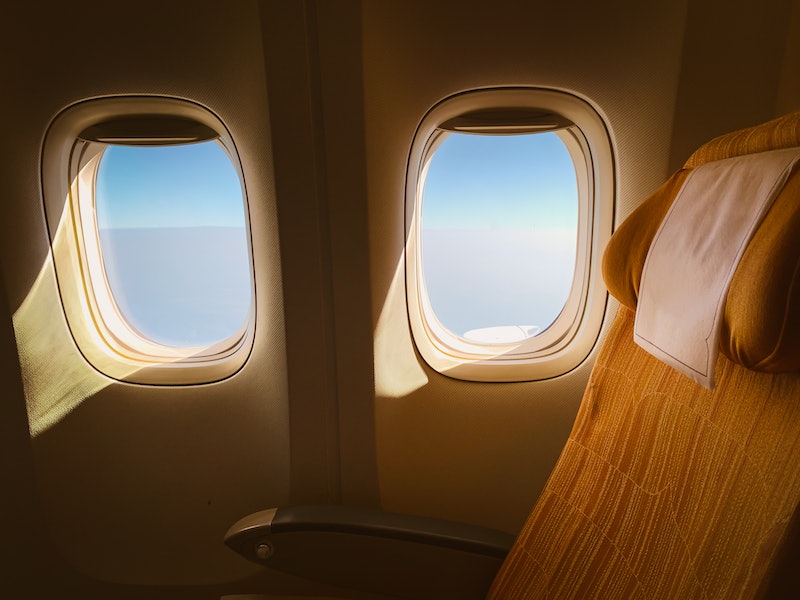 If you select a window seat on a flight, you usually expect picturesque views of clouds and mountains and a comfy nook to rest your head. But far too often, we shove our carry-on in the overhead, sit down, and find ourselves wondering why the airplane seat doesn't align with the window instead. The YouTube channel Today I Found Out tackles this tough question, though, explaining in a new video why the term "window seat" can be a tad misleading. Mystery solved!

According to host Simon Whistler, when airplanes are manufactured, their original design places the seats directly next to the windows with industry-standard row positioning. The seats are moveable, though, mounted on tracks on the floor of the aircraft — which means that airlines can then choose to change seat positioning around to suit different capacity needs and passenger comfort guidelines.

Whistler explains that the tracks “[allow] the seats to be easily moved closer together or farther apart,” providing a more flexible layout. This, in turn, can produce the somewhat "willy-nilly" look of seat placement on aircrafts with some windows aligned with the seats and some being partially obscured (and even some emergency exits slightly blocked). And, as Whistler points out, airline corporations rarely stick to the manufacturer's predetermined seating arrangement.

For example, Boeing apparently suggests that their 777 have three rows of three seats across. This arrangement is based on internal studies of “passenger perception of comfort,” which found that passengers prefer not to sit directly next to someone. Often airlines will choose different seating arrangements — such as the popular two-five-two across one (that is, two seats next to the window, and aisle, five seats in the middle, another aisle, and then another two seats next to the window on the opposite side), which can result in the windows being out of alignment with the seats.

Airlines typically try to accommodate as many people as possible per flight. Profitability and competitive pricing affect seat placement which, in turn, affects — you guessed it — legroom. Whistler points out that for short flights, ticket pricing is usually the deciding factor, so airlines tend to arrange the seats such that they can fit more people on the plane. For that reason, it is rare that your window seat will have an unobstructed view on, say, that two and a half hour jaunt from NYC to Chicago.

The amount of space between your seat and the one in front of you, or "pitch," comes into play in this airline seating Tetris as well. The arrangement typically looks something like this, depending on which airline you're flying:

The the width between seats is also shrinking — so get ready to get cozy with your neighbor!

If you've been wondering why the view out the window is less-than-great, it's probably because of the way the airline has chosen to arrange their seating. Guess I have to fly business class if I want a prime view from 40,000 feet.

More like this
You Can Stay At The 'Hocus Pocus' House On Airbnb
By Alexis Morillo
Craving The Beach? Here's Your Guide To A Solo Vacation In Turks & Caicos
By Alexis Morillo
The 5 Best Laptop Power Banks
By Vanessa Spilios
26 Ghost Story Podcasts To Get You Ready For Halloween
By Jessica Booth, Mia Mercado, JR Thorpe and Emma Carey
Get Even More From Bustle — Sign Up For The Newsletter