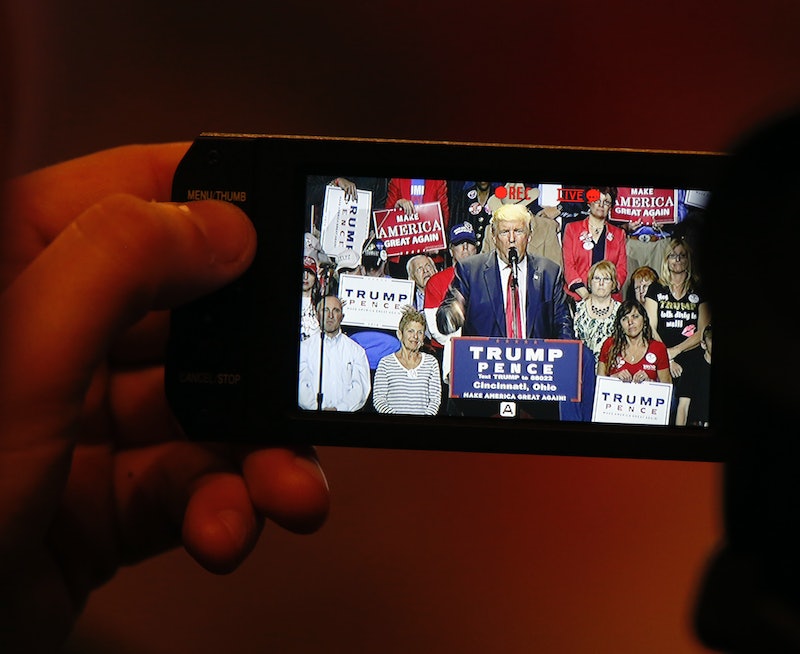 Most of Donald Trump's poll numbers are looking pretty bad. However, one recent Politico-Morning Consult poll seems to indicate that the Trump campaign's most lasting impact could hinder American democracy itself. With only a few weeks to go until Election Day, Trump is struggling to increase (let alone maintain) his appeal and trust with voters after the Washington Post published a 2005 hot-mic tape in which he bragged about grabbing women "by the p*ssy" and, subsequently, multiple women came forward with allegations he touched them inappropriately. Yet, despite those highly reasonable explanations for his polling slide, Trump seems unwilling to accept a potential loss.

Just as he did during the fraught GOP primary season, Trump is now claiming that the election may be "rigged," an accusation he levels without citing any evidence. Several prominent Republicans, including his own running mate, Mike Pence, has tried dispelling any ideas that the election of a Republican loss would be illegitimate. The scariest part of Trump's "rigged election" theories, though, is the fact that many Americans seem willing to believe them.

Even without any evidence to support the notion of a rigged election, 41 percent of voters think the election could be "stolen" from Trump, according the the Politico-Morning Consult poll. Never mind the fact that Trump has not indicated how he thinks the "rigging" would occur, or that careful, detailed procedures are in place to ensure the nonpartisan validity of elections—no, according to Trump, the only valid election is one in which he wins.

If, as the Politico poll indicates, Trump supporters believe their candidate's claims that the election is rigged (which, again, it isn't), there's the potential for some grave ramifications. I truly believe it could be likely there's violence or even rioting on election night and long afterwards if a significant portion of Americans think the election has been "stolen."

By fostering the illusion that the electoral process is disingenuous, Trump is attacking the most important American institution of all: the democratic process. The peaceful transition of power from one president to the next, or from one group to its opposition, is considered sacrosanct in our democracy — and it could be seriously endangered if thousands or millions of Americans are convinced that their votes were not counted.

Sadly, Trump's behavior isn't wholly surprising. After all, this isn't the first time Trump has undermined legitimate sources for his own gain. I find that his repeated warnings about illegitimate elections mirrors his role in stoking birtherism, a ridiculous, debunked conspiracy theory that President Obama was not born in the United States.

Unfortunately for the country, even after the prospect of a President Trump is gone, the dangerous vitriol of his campaign could very well live on — and, perhaps, do more damage to our democracy than even the man himself could.