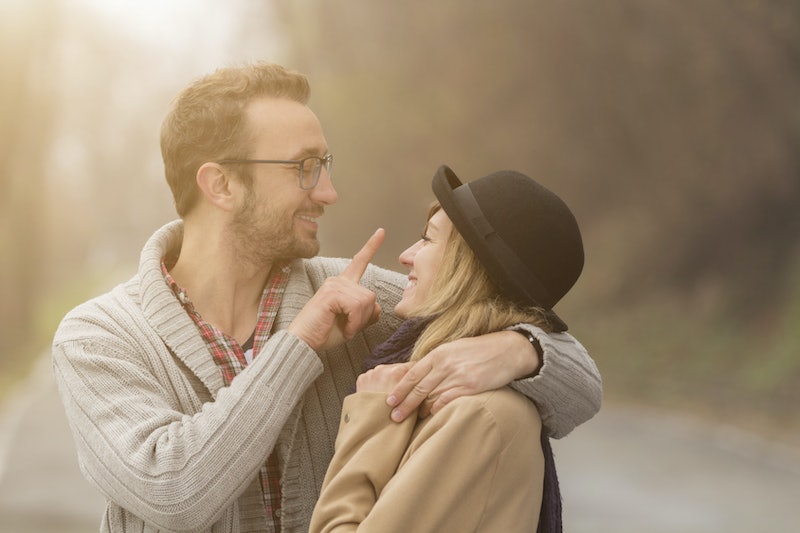 How you take your coffee. The way scratching their back makes them fall asleep. Your favorite doughnut from that place. Leaving you an encouraging note (or sending a thoughtful text) when you really need to be reminded that it’ll all be better soon. When you’re in a long-term relationship it’s not always the large, big and grand gestures that make you feel all-gushy for your partner. Instead, it’s the small, seemingly insignificant things that keep you together through the good stuff, the bad stuff and all of the rest of the stuff. Especially if you live with your partner or have been together for a very long time, you might not realize the everyday reminders you send them that they're loved.

Trust me though — they don't got unnoticed and are highly valuable! In fact, many therapists and relationship experts will advise couples to spend more time getting to know one another — from what makes their partner tick to what brightens their day — as a way to build their intimacy and connection. Though a fun, romantic weekend might help you get it on more often, what will make you happier with the person you hand-selected to share your life with is less grandiose but more meaningful. Here, couples who have been in happy, healthy relationships share the sweetest thing their partner ever did do:

1. They Put My Family First

“Without me asking, my boyfriend spent the entire weekend with my parents this past weekend — everything from us trekking two hours outside the city to visit my cousin and her newborn to talking politics/history with my dad all evening, and even attending a cheesy Magic Show on Saturday evening. At the end of weekend, I checked my Facebook events and noticed my boyfriend and I had missed his decently good friend's birthday on Saturday evening and when I brought it up to him he said that he told his friend he couldn't make it because he wanted to spend time with my rents while they were in town.

I totally would have been fine if he wanted to leave my parents at some point during the weekend to hang with his friend, but it was nice to see (based on his actions) and in how he planned his weekend how much he cared about spending time with parents. In past relationships, I've always had to ‘make the case’ or ensure we aligned on these types of things and it was just nice to know he values family time as much as I do.” -Chelsea

2. They Changed Our flight

“During one of our first travels together we were supposed to go to the Smithsonian the day before we left town. I was so excited to go, but then it turned out to be the day the museum was closed. I was so disappointed and assumed that it just wasn’t going to happen. Unbeknownst to me, he called up the airline and changed our flight so that we could still go to the museum. It was the kind of thing I would never do for myself, and showed me not only how much he wanted me happy, but that what makes him amazing is that he doesn’t see things as set in stone. Life is full of options and possibility for him, and that day he made one of my little dreams come true. I’m lucky to have him!” -Rebecca

3. They Blow Dried My Hair For Me

“I broke my foot once and was so defeated. My boyfriend blow-dried my hair for me as I sat on the bed in tears. That's when I knew I loved him... it was six months in and now we've been together for five years!” -Katie

4. They Never Let Me Walk in the Rain

“We have two parking spots. One covered, one uncovered. On a long day after I've been on my feet and carrying multiple things inside in the rain, Grey will make sure he leaves the covered spot for me. Simple, yet super sweet to me!” -Megan

5. They Packed Me Breakfast

“My boyfriend makes breakfast for us both every morning, he eats his at home and I take mine to work. Last week he had a doctor's appointment that required him to fast so I wasn't expecting breakfast but he made eggs and bacon and packed it all up just for me. It was a simple gesture but I really appreciated it.” -Suzanne

6. They Cleaned Our House

"My fiancé knows how much I appreciate coming back to a clean house after a business trip, and will always do his best to keep it tidy when I'm gone, but recently after a two week international stint, not only was the house clean, but when I got to the bathroom, he had laid out my pajamas, bath salts and a bath bomb with an aromatherapy candle for me to relax in the tub.” -Amanda

7. They Willingly Signed Up For a Dance Class

“I don't even know how to even count the ways but mike agreed to take tango lessons with me because I wanted to and he just wanted to do something I love.” -Gigi

8. They Clear Off My Windshield

"My husband always scrapes the windshield for me in the winter time. It doesn’t seem like much, but it’s so nice to come outside to see when it’s freezing and snowing!” -Fatima

9. They Do What They Can To Make My Life Easier

"I picked up some overtime at a pharmacy that's an hour away tomorrow, because having babies is expensive! He got me takeout from my favorite Chinese place so I'll have leftovers tomorrow, and filled my car up with gas because he just happened to notice it was low. So now I won't have to stop in the morning.

Also, I'm upstairs Netflix-ing by myself because he's staying up late to watch the Cubs downstairs, and he just brought me ice cream in bed. -Leanne

“This was back when we were just dating, but I had a rough day at work and was hanging with my roommate eating bruschetta and drinking wine and watching America's Next Top Model for girls' night. He texted on his way home from work and I told him about my crappy day. Fifteen minutes later, he showed up with two pints of ice cream, a hug, and then left so we could continue girls night. Bonus: He even got her favorite and my favorite type of ice cream.” -Jennifer

“When I was feeling really homesick one week and was still new to Australia my husband (boyfriend at the time) took me out to an American bar so I could get a BBQ sandwich and a pint of Blue Moon! (That bar is the only place that has Blue Moon on tap!).” -Sara

12. They Take Care Of My Friends, Too

“We went to a friend's wedding. After the rehearsal dinner, the bridal party went out for drinks. The bride and one bridesmaid that was staying with her at the house got a little more sloshed than the other two. Not only did he drive them home and make sure they were safe, but the next morning he woke up early, picked up coffees, and brought them over, made sure they were awake, and got them some Advil for their headaches. This was after only dating for about three months. The fact that he would do something like that for my friends was a huge insight into the kind of person I was with.” -Megan

13. They Get Up Early With The Kids So I Don't Have To

“One of my girls is a SUPER early riser. I am talking like 5:30 or 6 a.m. When she wakes up he will fix her breakfast and get her set up watching cartoons so I can sleep an extra 30 minutes. Then he'll leave for work.” -Melissa

14. They Helped Me Get Over Jet Lag

“After I was in Europe for two weeks — some for work and some with one of my friends — my flight was delayed several hours. By the time I got home, I felt somewhat like a zombie and was beginning to be anxious about going back to work the next day. But instead of feeling really stressed out, I walked into an apartment with candles lit, relaxing music playing, a warm bath drawn and a glass of wine poured for me. My boyfriend told me he missed me and he wanted me to take the night to really zone out and feel better. After my bath, he rubbed my back until I went to sleep.” -Megan

15. They Always Celebrate Me

“My boyfriend had to work three months overseas for a work project. The time difference was really terrible and made for awkward hours to talk to one another. I found out I got a promotion at work and was so excited to tell him, but wanted to say it face-to-face (or I guess, screen-to-screen). We ended up Skyping at 9 p.m. my time and 6 a.m. his time, and even though he was incredibly sleepy, he was so excited for me. After I told him, he asked if the photo on my wall was crooked. I looked and said it wasn’t, but he told me to go get it off the wall. I was confused, but listened. When I opened the back of the picture frame, there was a congratulations card. I asked him how he knew and he said ‘Just in case something amazing happened while I was gone, I wanted you to have something from me to celebrate.’” -Rory