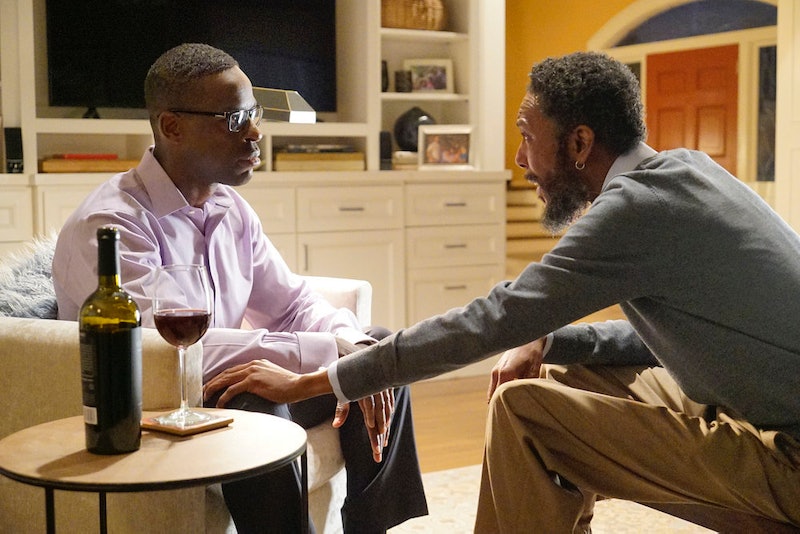 As one would probably expect, Randall finding his birth father on This Is Us is stirring up a lot of feelings, but not just emotions about parentage or questions about his abandonment. Randall is questioning his entire identity, as both the present and past timelines show that because he grew up in a white family, he has seen himself as somewhat of an outsider for most of his life. As an adult, Randall has been able to push these feelings to the side, but William's presence is definitely bringing them back up.

In the present, Randall seems to live in a predominantly white neighborhood, and when his neighbors call the police because they think that William is "loitering," Randall diffuses the situation and brings him inside. William isn’t happy that Randall deferred to the white neighbors and police officer, and Randall tells him about all of the micro-aggressions that he has to deal with on a daily basis, which he must choose to ignore or deal with being angry all the time. William, as a counterpoint, told his granddaughters earlier in the day about the time that he helped support busing when others were protesting it. After hearing this story and the experience with his neighbors, Randall is dealing with the same question of belonging we see him face as a child in the past.

As the flashbacks reveal, 9-year-old Randall seems to feel caught between two worlds — he chooses the pool he wants his family to go to because he knows there will be black families there. We see him tallying something up on a pad and only later learn that because the area he grew up in was so predominantly white, Randall kept a running count of every new black person he saw. When one of the black mothers suggests that Rebecca find a barber for Randall who can better cut his hair (he has razor bumps on his neck from his current haircuts), Rebecca is angry. But when she realizes why her son chose the pool, she realizes that she was being unfair and what Randall needs. She asks the same mother for a barber recommendation and if Randall could play with her children after school one day. I think Rebecca finally sees what Randall has been struggling with and thankfully, is seeking ways to help him.

Of course, that doesn't mean he isn't still struggling in the present. His oldest daughter played Snow White in the school play, and he is seen getting visibly angry when other parents chuckle at the lines about her being the "fairest." Later, he says he wanted to raise his kids so that they never would think a black girl playing Snow White is strange, and some of his pain seems to be alleviated when William tells his son that he is proud of him. I'm sure we'll continue to see Randall deal with his questions of identity in both the past and present, but the episode's end proves that both he and Rebecca are doing their best to give their children happy lives where they feel included no matter where they are.