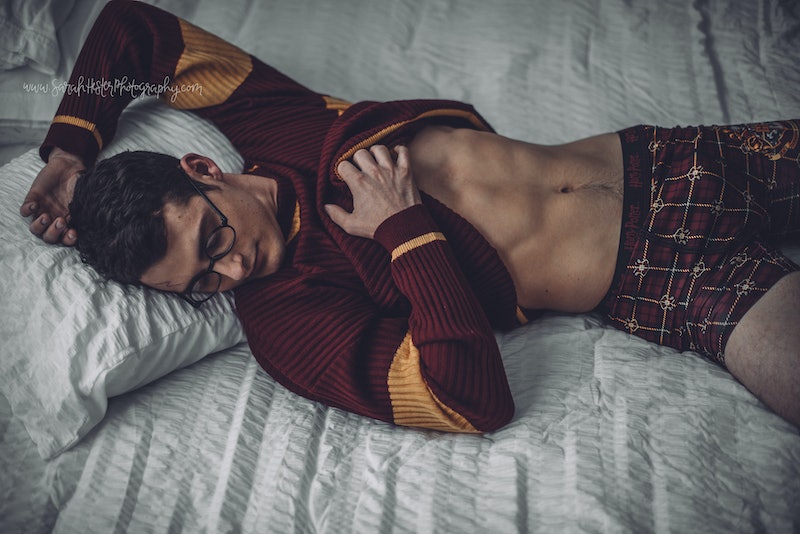 When you read about The Boy Who Lived, your first thought is probably not "Six. Pack. Abs." But these sexy Harry Potter boudoir photos will forever change the way you think about J.K. Rowling's iconic wizard character and his, um, wand skills.

Photographer Sarah Hester met the model who plays Harry Potter, Zachary Howell, during a meet-up for photographers. Hester normally works with female models, and Zach would help her with posing men. "I couldn't remember his name, so I started calling him 'Harry,'" she tells Bustle. They joked about doing a Harry Potter 'boudoir' session and — thankfully! — made it happen just a week later. As they say: Good things take time, but great things happen all at once and involve Gryffindor boxer shorts. (I'm paraphrasing.)

Hester says the two had a great time on set. "Zach was awesome to shoot," she says. "I was really uncomfortable shooting a man at first, but he made it easy."

"I've never laughed more at a shoot," Hester adds. (Presumably, she is much more capable of keeping calm and professional when presented with a teenage fantasy come to life than any of us would be.)

Check out some of the photos below and remember to breathe:

"Oh, is that an Avada Kedavra curse? Because I AM DEAD."

"Is that an 11" long holly wand in your pocket or are you just happy to see me?"

"Hey, Mr. Potter, did you just cast an Engorgio charm on my heart?"

"Mischief definitely NOT managed." (Call me?)

Thankfully, Hester and Howell have more 'geeky' projects in the works. "Working with him is a lot of fun," she says. What a time to be alive.