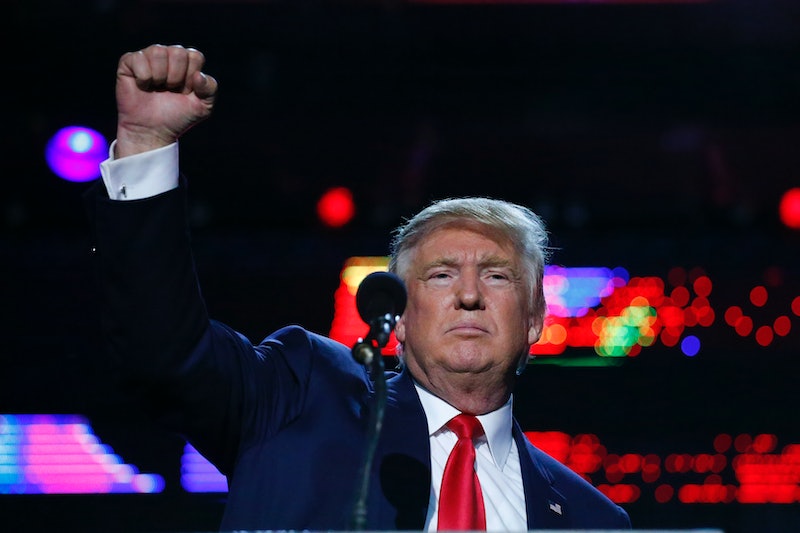 You guys, maybe we’ve just had Donald Trump wrong this whole time: maybe he’s just looking for a little positive reinforcement. That certainly seems to be the case when it comes to Trump’s relationship to CNN. The Republican presidential nominee's esteem (or lack thereof) for the Cable News Network seems directly tied to his rising and falling with its polls.

The Republican nominee has spent much of the last several days railing against the media as his numbers in the polls have been flagging. As the possibility of his electoral demise has increased in likelihood — though is still not certain — Trump has lashed out in every direction, calling into question the very integrity of the election itself, and savaging any entity that speaks out against him, be it his opponent, the media, or his the Republican party.

CNN has had more than its fair share of its abuse from Trump, but with a new CNN/ORC poll released Monday, showing Trump up four points on Clinton in the crucial swing-state of Ohio, Trump had some uncharacteristically kind words for the network. “Wow, new polls just came out from @CNN Great numbers, especially after total media hit job,” Trump tweeted.

There’s never been much doubt that Donald Trump is a total narcissist, but taking a look back through his relationship with CNN, it’s pretty striking to see just how quid pro quo his feelings about the channel can be.

Even though the Donald’s opinions of CNN had been critical even before he declared his candidacy for the Republican nomination, he still never passed up an opportunity to use the network as a way to score some free media. These two tweets about the network, sent two days apart, show how quickly he could swing from positive (after a fairly light-touch interview of Trump surrogate Michael Cohen with CNN’s Kate Bouldan) to punishing (after CNN Politics published a story about Trump’s claim that he’s never sought forgiveness).

Throughout much of the fall of 2015, Trump seemed to have mostly nice things to say about CNN, though much of this had to do with his performances in their polls. That all ended by the end of November.

There seem to be plenty of beef between Trump and CNN around this time — one story they pushed back on was that Trump was able to “witness” people jumping from the Twin Towers on 9/11 even though he was over four miles away in Trump Tower — causing Trump and his twitter followers to lash out again.

Still, less than a week later, when a new CNN poll came out with good Trump numbers, he was thanking the network again. Yet, five days later, Trump accused CNN of boring its audiences. He trashed its commentators while simultaneously complimenting Don Lemon on a good interview.

In the run-up to the first primaries, Trump was happy to hear his good polling news, but accused the network’s reporting of his rallies as biased.

This tweet, in reference to a Mar. 29 Town Hall on CNN that featured, in sequence, Ted Cruz, Donald Trump and John Kasich, is Trump happily gloating about upping CNN’s numbers during the 9pm hour, when he was being interviewed. It’s Trump’s favorite kind of compliment — one that’s about him.

By June 5, Trump had christened CNN the “Clinton News Network.” Amidst a summer of struggles for the Trump campaign, the nominee had no shortage of harsh words for the network, and nearly every instance where he mentions CNN on Twitter between then and now was negative.

But look, one new positive poll, and things seem to be going well again! Still, if this is any indicator of how the Donald behaves when things don’t go his way, CNN might be in for a very long November.

More like this
Camilla Paid Tribute To The Queen In A Heartfelt Video Message
By El Hunt and Sam Ramsden
How To Follow The New Royal Family Social Media Accounts
By Sam Ramsden
Elton John, Sir David Attenborough & More Celebrities React To The Death Of Queen Elizabeth II
By Sam Ramsden and Jake Viswanath
Here’s Everything You Need To Know About Operation London Bridge
By Bustle UK
Get Even More From Bustle — Sign Up For The Newsletter