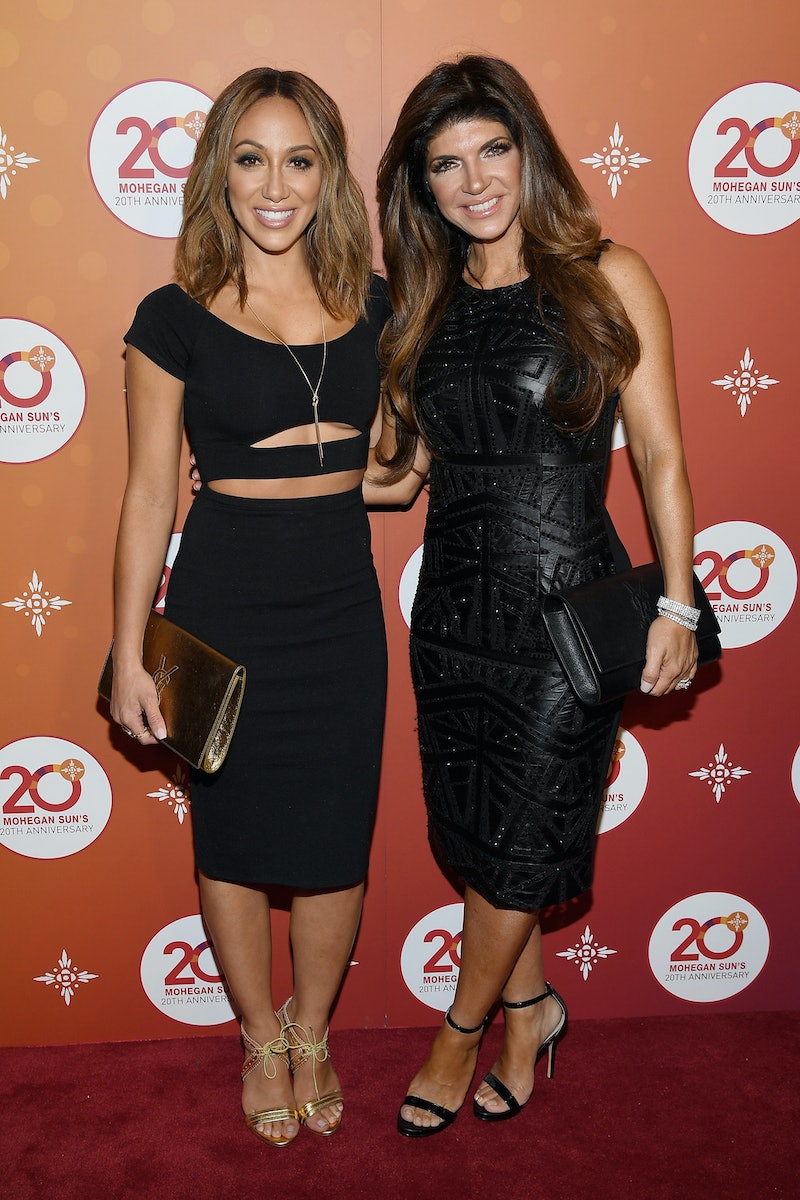 Over the weekend, Connecticut resort and casino Mohegan Sun celebrated its 20-year anniversary the right way to celebrate a resort and casino's 20-year anniversary: it threw a big ol’ party and invited a bunch of celebrities to partake in the revelry. Of all the pictures from the Mohegan Sun extravaganza, none spoke to me quite like the snapshot of Real Housewives stars Vicki Gunvalson, Ramona Singer, Teresa Giudice, and Melissa Gorga standing in front of the event’s designated photo op backdrop. Oh, to be a fly on the step and repeat of this photograph.

When I look a the photo of Gunvalson, Singer, Giudice, and Gorga together, I don't just see four of my favorite Real Housewives posing for the cameras. I see a story. And I will share that story with you now.

The Legend Of The Mohegan Sun Armadillo: A Fictional Tale Inspired By A Real Photo Of Some Real Housewives

As Melissa Gorga and Teresa Giudice make their way into the main ballroom of the Mohegan Sun 20th anniversary party, they stop in front of the official step and repeat area. Teresa looks over to her left and, sure enough, there are more Housewives. Teresa and Melissa make eye contact with Ramona Singer and Vicki Gunvalson. All four faces immediately brighten.

“Oh, my gaaaawwwwd,” Teresa shrieks as she runs over to Ramona and Vicki. “I didn’t know you guys would be here!”

"Are you kidding me?" Ramona gasps. "I wouldn't miss this casino's birthday for the world. Especially now that it's been a part of our show."

“Hold the cameras for just a second,” Vicki says to no one in particular as she adjusts her statement necklace. “The OG’s necklace is all messed up! Why can’t this clasp stay put!”

“Wait, but what if the necklace gets snagged on something?” Melissa asks in earnest. “You could tear the dress. That sounds like a mess waiting to happen.”

“Just don’t let the necklace snag on anything!” Ramona replies, her volume increasing with every syllable. “Problem solved. How easy is that—“

“Oh, Melissa, Teresa,” Vicki interrupts. “This is perfect. You can settle the debate Ramona and I’ve been having. No one else seems up for the challenge, but you two will be able to handle it, I just know it.”

“Wait, does this have something to do with Andy Cohen tweeting about Housewives and the election and whatever?” Melissa asks. “Because I don’t want to get into this.”

“I really don’t want to get into this,” echoes Teresa.

“No, no,” Ramona laughs. “Nothing like that. Much more important.”

“I… I can’t answer that,” Teresa replies through a clenched smile. “Next question please.”

“What about Turtle Whoop?” offers Melissa as she nervously fiddles with the pleats of her skirt. “Can we say both?”

“Come on, we’re all grown ups here,” Vicki says. “No one will take it personally.”

“Don’t try to make us do this,” Teresa sighs. “We’re not going to fall into this trap.”

“It’s not a trap!” Ramona insists.

“Who are you, Admiral Aardvark?” Ramona cackles.

“I think you mean Admiral Armadillo,” Vicki says. “Or whatever. Wait, what’s the difference between an aardvark and and armadillo?”

“One has a, uh, shield thing,” Teresa replies. “I think it’s the arma-whatever thing. The armadillo. Milania is obsessed with them. She has this, like, stuffed armadillo that she swears is haunted.”

“What?” Vicki does a double take. But before she can ask any other questions about the haunted armadillo, her mind wanders off to whether or not there will be tequila shots at this party.

“Um, guys,” Melissa resumes fussing with her skirt. “Can we take the picture already?”

“Oh, my gosh,” Ramona cackles. “I forgot there were cameras here. I guess that’s what happens when you’ve been a Bravolebrity for almost a decade.”

Teresa, Melissa, Ramona, and Vicki pose for the photographer and smile.

“Admiral Akbar,” the armadillo photog hisses. And then, it vanishes into thin air, leaving the camera behind. Everyone else in the room continues on as if nothing odd happened. The Housewives' cell phones ding in unison. They receive the armadillo's photograph from an unlisted number. The Housewives vow to never speak of this again.