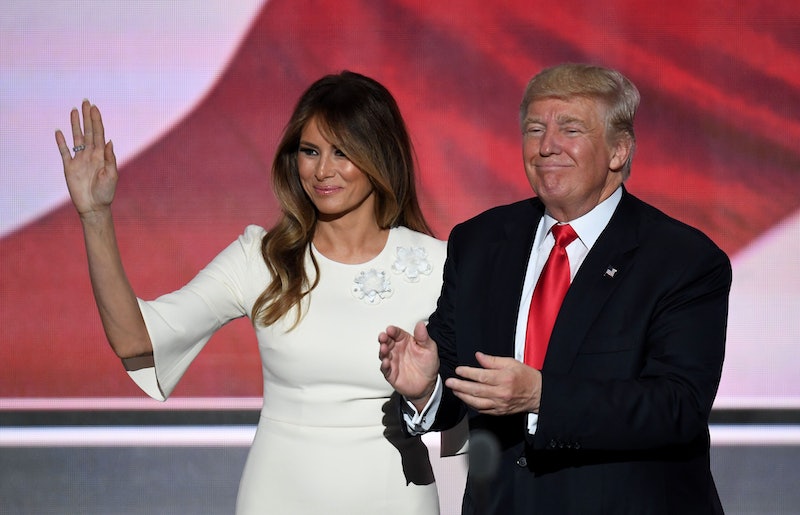 Melania Trump finally broke her silence on her husband Donald Trump's Access Hollywood tape in an interview with Anderson Cooper on Oct. 17. During the interview, Melania said Trump "tells it as it is," a claim that is unfortunately far from the truth.

When Trump decided to run for president, Melania said they considered how he had made appearances on many shows. They knew tapes would come out, she said. "It's hard because press, it's very dishonest, and it's a lot of lies that they've written about me [and] my husband," Melania told Cooper. She cited the The Washington Post and the The New York Times as news outlets she believes have been "unfair" to the Trumps.

"My husband is real," Melania went on to say. "He's raw. He tells it like it is." To the contrary: in an article dated Sept. 25, based on statements from the previous week, fact-checkers found Trump making a false statement every 3.25 minutes on average, according to POLITICO. Within the same time period, POLITICO found that Hillary Clinton spoke an untruth approximately every 12 minutes.

Trump's file on PolitiFact, a fact-checking website run by reporters and editors, is similarly full of false statements. PolitiFact's researchers rate statements on a Truth-O-Meter scale from "True" to "Pants on Fire" false.

Trump's scorecard leans overwhelmingly towards the "false" side of the Truth-O-Meter, with only 4 percent of his fact-checked statements being "True" and 18 percent being "Pants on Fire" level false. 19 percent of his statements were "Mostly False" and 34 percent were just plain "False." This doesn't bode well for the credibility of Melania's reassurances that her husband "tells it like it is."

Most recently, for example, Trump has been pushing the idea that the presidential election is unfair. "The election is absolutely being rigged by the dishonest and distorted media pushing Crooked Hillary — but also at many polling places," he tweeted. Trump is being accused of promoting voter intimidation practices with these statements, but he's also pushing an idea with little to no evidence behind it. According to PBS' report on a study by a Loyola Law School professor, there were only 31 impersonation cases among the 1 billion votes cast in all American elections between 2000 and 2014.

And plenty of Trump's supporters are buying into the idea that the election lacks integrity. Only one-third of Republicans said they have "a great deal or quite a bit of confidence that votes on Election Day will be counted fairly," according to poll from the Associated Press-NORC Center for Public Affairs Research.

So, if Clinton is elected, she will likely be starting out with many Republicans questioning the legitimacy of her presidency. This could lead to years of problems with GOP members who refuse to work properly with her based on claims that Trump was supposed to win.

As the Republican presidential candidate, Trump's words have an impact on millions of people around the country. For this reason, it is extremely important that he speaks truthfully. And since that's unlikely to happen, fact-checkers will have to keep up with his claims.