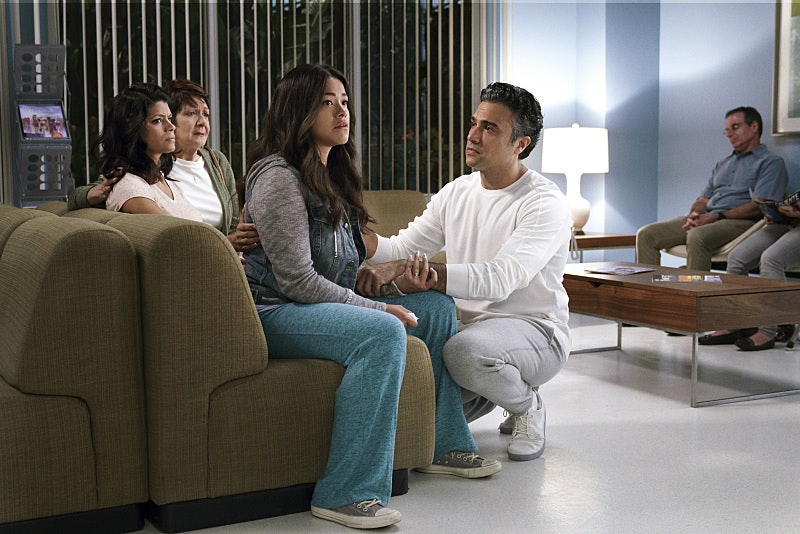 Michael Cordero, aka the new Mr. Jane Villanueva, fought for his life in Jane The Virgin 's Season 3 premiere, "Chapter Forty-Five." Fans, specifically those on #TeamMichael, will remember that Michael ended last season on the floor of the Marbella after being shot in the chest by his partner, Susanna, who was really Rose in disguise — on his wedding night. Jane the Virgin picked up just five minutes later, with Jane rushing out and finding Michael bleeding out on the floor. Luckily, he was still breathing when she found him, and she was able to get him to a hospital, but it didn't look good. It was a tough night for Jane, but, at the end of it all, Michael's fate was revealed on Jane the Virgin... and we couldn't be happier.

Before you get too worked up, let me assure you: Michael lives! Yes, Michael survived being shot in the chest by Sin Rostro on Jane the Virgin — and he doesn't have amnesia (hey, this is a telenovela after all). Michael might have lived to fight another day, but it was touch and go for most of the episode. Michael's condition was so delicate, Jane was faced with her first major decision as Michael's wife: whether or not to operate on swelling around his spinal cord. Untreated, the swelling could lead to paralysis, but an operation could kill him.

In the end, Jane decided to let Michael have the operation. It's what he would have wanted – he's a fighter. It's what he told Jane right before they kissed for the second time, as seen in heart-melting flashbacks. Before he goes into surgery, Jane tells Michael, "This is not the end of our story." And she was right!

Michael is alive on Jane the Virgin, but that doesn't mean he's out of the woods yet. When he woke up, Michael remembered everything, including who shot him. And Susanna (he doesn't know Susanna is really Rose) is still out there somewhere. For now, let's just be happy that Michael is still alive and that, with any luck, Jane will finally get to lose her virginity!