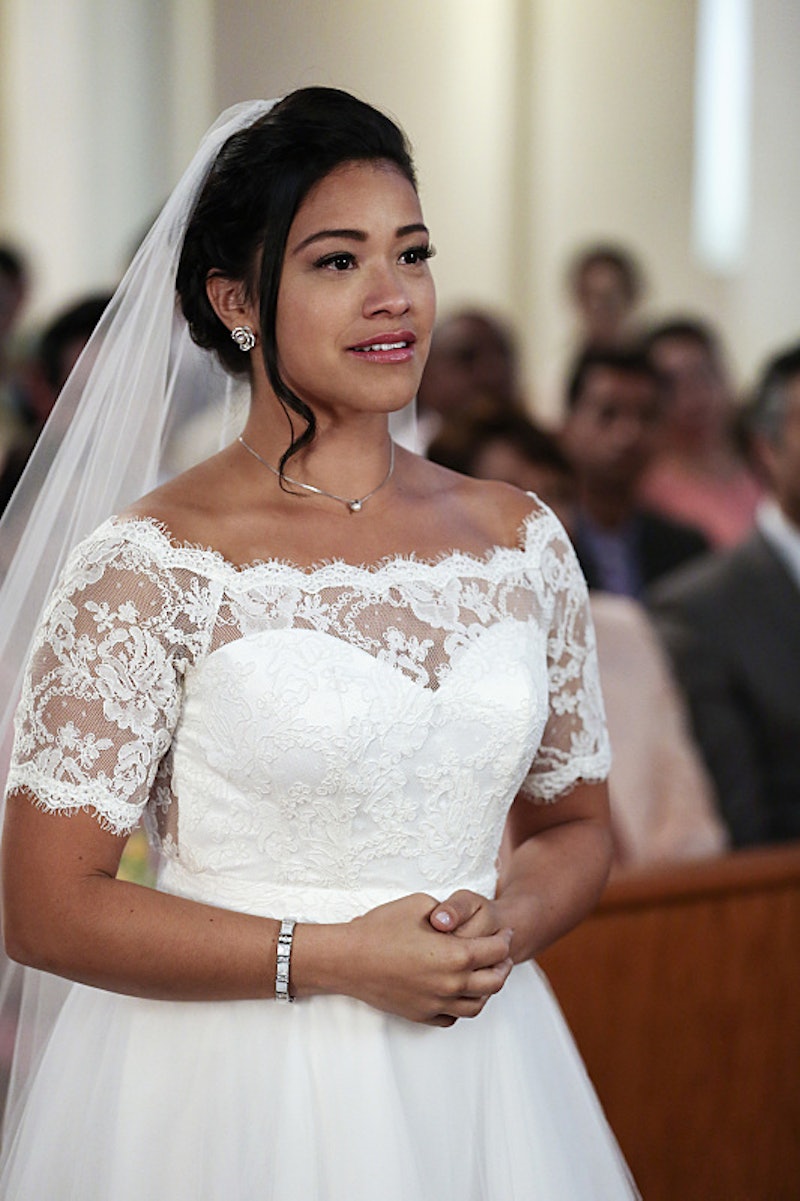 It's been a long time since fans have been able to check in with the Villanueva family, but now that summer is officially coming to a close, we're one step closer to the long-awaited Jane the Virgin Season 3 premiere, which is currently set to debut on Oct. 17. And while there are many reasons to get excited about the show's return (like making sure Michael is still alive, for one!), viewers can also look forward to Jane making a decision that will change the very concept of the show itself. According to Jane the Virgin narrator, Anthony Mendez, who recently spoke with Bustle about the upcoming season, Jane will definitely lose her virginity on Jane the Virgin Season 3 in what's sure to be an unforgettable episode.

"At this point, we don't know where they're heading with anything," Mendez admits. "All I do know is that Jennie [Snyder Urman] had mentioned that Jane would loose her virginity this season, but we either don't know or can't say when that happens." Fans were eager to see Michael and Jane seal the deal, so to speak, during their wedding night. But, of course, we all know how that turned out — with Michael suffering from a possibly fatal gunshot wound. That doesn't exactly set a very romantic mood, in my opinion, so I think it's safe to assume it won't be happening right off the bat.

What's really concerning, though, is the fact that we can't be entirely sure that it will end up being with Michael, considering the recent injuries he's obtained. However, when it does happen, you might want to have a cool beverage on hand because, according to Mendez, Season 3 is going to get pretty steamy at certain points. "This season we might see things possibly steam up with her new relationships," he shares, while adding: "I can't say whether that's with Michael or somebody else from her past that's coming in."

Team Michael fans may feel a little uneasy about all of this uncertainty, but really it's important to keep in mind that the only thing that matters is what Jane wants in the end. And for his part, Mendez is happy the series centers around so much more than just Jane's sex life. "[Jennie]'s very smart in making sure that it's not all about that," Mendez explains. "It's more about dynamic in this family and the different storylines and how Jane is still trying to grasp with her identity and her goals in the midst of all this crazy stuff happening around her."

So however this big moment ends up unfolding in Jane's life, let's just hope that it's something that makes her happy. Because really, in the end, it's her decision to make.

More like this
Wait, What’s Going On With Ben In That Umbrella Academy Season 3 Post-Credits Scene?
By Gretchen Smail
Did *That* Character Really Die In The 'Stranger Things' Season 4 Finale?
By Grace Wehniainen
Hayden Panettiere Admits "Addiction" To Alcohol & Opioids Before Going Sober
By Jake Viswanath
Everything To Know About The 'Pretty Little Liars' Reboot On HBO Max
By Mary Kate McGrath, Jack Irvin and Radhika Menon
Get Even More From Bustle — Sign Up For The Newsletter