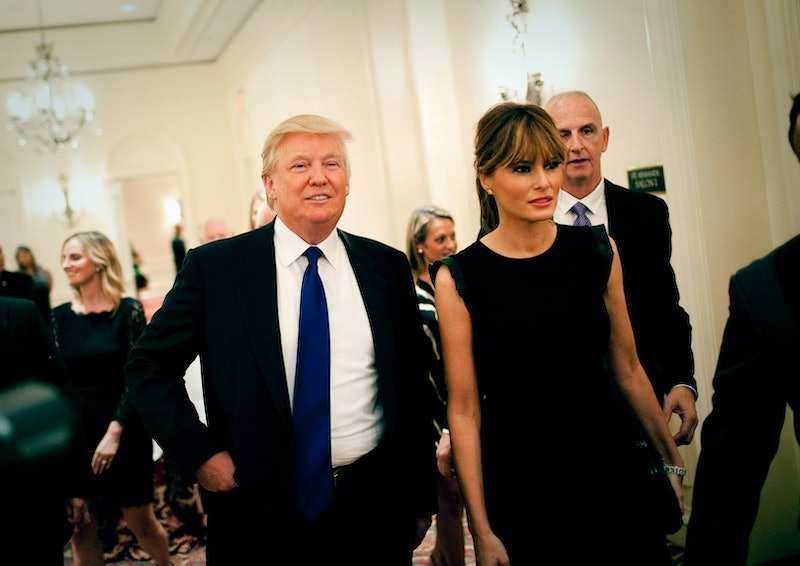 On Monday, Melania Trump spoke to CNN's Anderson Cooper about a number of hot button issues including the 2005 Access Hollywood recording and a former People writer's allegation that Donald Trump forcibly kissed her the same year. Trump has denied that claim, as well as the others that have surfaced since the hot mic tape recording was released. During the interview, Melania claimed the People story written by Natasha Stoynoff was false because she and Stoynoff were allegedly never friends.

In her People article, Stoynoff claimed that she was interviewing Trump and Melania for their one-year anniversary at the Mar-a-Lago estate in Florida when Trump allegedly pinned her "against the wall ... forcing his tongue down [her] throat." "You know we're going to have an affair, don't you?" Trump allegedly told her. The GOP nominee's spokeswoman responded immediately to those allegations saying, "This never happened. There is no merit or veracity to this fabricated story."

In response to the story, Melania tweeted a letter from her attorney to People on Oct. 13. The attorney, Charles J. Harder, demanded a retraction of Stoynoff's story for statements not relating to the alleged assault, but instead relating to Stoynoff's description of what she claimed was a meeting between herself and Melania.

"That winter, I actually bumped into Melania on Fifth Avenue, in front of Trump Tower as she walked into the building, carrying baby Barron," Stoynoff alleged in her article. "'Natasha, why don't we see you anymore?' she asked, giving me a hug."

But, just as she denied that Trump had ever acted upon his claiming in the hot mic tape that he could grope and kiss women without permission, Melania denied meeting Stoynoff, claiming she would not even recognize her. "The story that came out in People magazine, the writer she said my husband took her to the room and started kissing her," Melania said during her CNN interview, and insisted that this incident "never happened."

"I was never friend [sic] with her. I saw her — she interviewed us twice. She came to the wedding and for that story. That's it. I would not recognize her on the street or ask her why we don't see her anymore," Melania continued.

Melania went on to say that Trump "is kind, and he's a gentleman, and he would never do that. That everything was organized and put together to hurt him, to hurt his candidacy." Based on this interview, it seems as though Melania is on the same page as her husband, denying the allegations that continue to take a toll on his campaign.